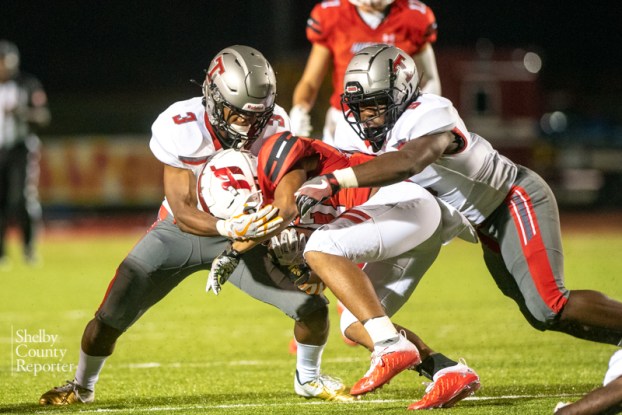 The Thompson Warriors will host Hewitt-Trussville in a battle of top-five, unbeaten teams this Friday night. (File)

As if the first four weeks of the season weren’t exciting enough, this Friday will give us one of the most thrilling nights of the high school football season.

Not only are there 11 games taking place this week, but three of those games will feature teams that are undefeated in region play with a combined overall record of 19-1 this season.

That includes two ranked matchups between No. 1 Thompson and No. 4 Hewitt-Trussville and No. 9 Oak Mountain and No. 2 Hoover in Class 7A, Region 3. In addition to those two showdowns, the Pelham Panthers will play host to the Helena Huskies in rivalry battle featuring the last two region champions. Read all about that rivalry matchup here.

Beyond that, several look to continue battling in region play and fight for a playoff spot this season.

Thompson has won 22 consecutive games, and this year has been particularly dominant with a combined score of 217-3 against the Warriors’ first four opponents. The last time they lost, however, came on Oct. 25, 2019 against Hewitt-Trussville to end the regular season. Now, the Warriors prepare for their toughest test of the season as the welcome the Huskies to Warrior Stadium this Friday for a top-five battle of undefeated teams.

Both teams have been dominant for the most part this season with Thompson scoring 55, 55, 58 and 49 in their first four games for an average of 54.3 per game and Hewitt-Trussville scoring 49, 41, 38 and 42 for an average of 42.5 per game. Defensively, each has been impressive as well with Hewitt giving up 12.8 points per game and Thompson giving up less than a point at 0.8 per game. As good as the Huskies have been, Thompson has been about 12 points per game better on both sides of the ball.

The offense has seemingly a different player make an impact on every drive, while the defensive front is in the backfield in the blink of an eye or clogging up every running lane in addition to a physical and speedy secondary and linebacker unit. While it will be the Warriors’ toughest test to date, they still haven’t forgotten their last loss and aren’t showing any weaknesses outside of a few penalties. Expect Thompson to come out determined to prove just how good this year’s team is in the toughest matchup so far. Thompson 42, Hewitt-Trussville 17

Inches. That’s how close Oak Mountain was to beating Hoover for the first time in school history last year in the quarterfinals of the playoffs. But what many considered a bad spot, leaving the Eagles short of a first down and a chance to finish off a game-winning drive deep in Bucs’ territory, ended Oak Mountain’s season with a 24-21 loss. That has been something that has set with the Eagles in the offseason, making this game an emphasis. It won’t be an easy one, however. Hoover, well, it’s still Hoover.

Both teams sit at 4-0 on the season with the Bucs ranked No. 2 and Eagles No. 9. It marks the second year in a row Oak Mountain is off to a 4-0 start after making school history by doing it for the first time last year, so the team is confident. A big reason for that is the team’s dominance in the second half and impressive defensive play. The Eagles have been tied or trailed at the half in every game, but they have gone on to outscore opponents by a combined 78-6 in the second half of games.

The defense has also yet to give up more than 19 points in a game and has held the last three opponents to 14 or less for an average of 10 points per game given up. Hoover, however, is scoring 37.8 points per game, compared to 27 from the Eagles, while the Bucs have given up 17 or less in every game for an average of 10. I do think Oak Mountain’s hunger to win this game, combined with the solid defense, can help the Eagles make this another tight battle with a chance to win late. That said, it hasn’t happened in school history, so the Bucs have to remain the favorite. They have also beaten similar opponents Gadsden City and Vestavia Hills by a combined 35 more points. Hoover 28, Oak Mountain 24

It has been a difficult three-week stretch for Spain Park with three consecutive losses. In that stretch, the Jaguars have scored 17 or less in each and given up 38 or more in each. Albeit those three games have come against ranked teams in either the 6A or 7A classification, there just seems to be a lack of urgency right now. Finding that in a hurry will be big in determining how this team finishes the season. With their toughest games behind them, the Jags will have chances to win pretty much the rest of the way. Believing in that can go a long way. It starts this week against Gadsden City who has lost two in a row as well scoring 17 or less in both. Last year, however, these two were in a similar situation and Gadsden City won that won 31-17. Spain Park’s players are laying it on the line from a physicality standpoint, but the Jags just need to show slightly more creativity and belief that they can compete. If that happens, we could see things start to click in the second half, but it’s something that has to be proven. Gadsden City 24, Spain Park 21

Briarwood continues to truck along after improving to 4-0 last week against Woodlawn. The Lions have now scored 41 or 42 points in every game this season and have faced some adversity with the comeback win against Chelsea. Now, they’ll get a 1-2 Huffman team that is struggling defensively. The Vikings have given up 42.8 points per game and are only scoring 22.5 points per game, while Briarwood is giving up just 20 and has scored more than 40 in every game. The Lions are still growing together as a defense, but the offense is finding more and more to step up each week. That alone will make the difference in this one against a defense that has struggled thus far. Briarwood 35, Huffman 17

The Shelby County Wildcats are 2-0 in region play after two consecutive wins, and they’re coming off a confidence-boosting win in a tight and physical battle that was won 11-0 thanks to Tommy Grigsby’s field goal with 37 seconds to play. The Wildcats are tied atop the region standings now with this week’s opponent, but it’s the toughest opponent on the schedule. Shelby County is 1-8 all-time against Demopolis, and the Tigers are playing well. Their only two losses are to two good 6A teams—Calera and McAdory—to kick off the season. Since then, they have a forfeit win, and more importantly, they beat Sipsey Valley 60-12. Shelby County also beat Sipsey Valley, but only did so 35-22. The Wildcats are showing improvements each week, and the defense has improved drastically since the team’s jamboree. That could make this a close battle, but regardless, the Wildcats will have a good chance to win every game after this, so keeping confidence high will be key. Demopolis 31, Shelby County 17

Last year, Montevallo went through the first four games 0-4. This year, the Bulldogs sit at 2-2, and despite losing two straight, they’ve played their two toughest games and have done so by showing improvements on the defensive side. Now, they enter a stretch where they won every game the rest of the way last year and should have a strong chance to do the same this year. That starts this week with a matchup against Wilcox Central, who has scored just 6.5 points per game and given up 44.8 points per game. Montevallo should be able to win this game going away, but the one thing the Bulldogs need to take advantage of is figuring out the next offensive weapon aside from Joseph Anderson. The athleticism and talent is there, that if one more player can become a breakout star, then the Bulldogs will become extremely dangerous. Montevallo 35, Wilcox Central 7

Vincent finished off last week’s game after failing to do so a week earlier. It marked continued progress for the Yellow Jackets, who are taking major steps in the right direction so far this season. Vincent now sits at 3-1 overall, while Jermarey Lawson is coming off his best game of the season and the defense continues to play well. Now, the Jackets look for a second region win in a row against Fayetteville in a game that will likely be similar to last week’s win against Horseshoe Bend in which it took some late plays to pull away in the final quarter. Fayetteville is 2-1 on the season, but it’s a team that has scored 28 or less in the first three and is coming off a grueling 54-21 loss to Lanett. Vincent won this game 41-31 last year, and it should be another similar battle this year for a Jackets’ team that is improved. Vincent 40, Fayetteville 28

The Cornerstone Chargers get their best chance at a win since the 20-0 victory against Southern Prep to start the season. The last three weeks, however, the Chargers have forfeited one game and lost the other two 54-0 and 65-0. Snook, however, is 0-3 on the season and has scored just 14 combined points so far and given up 34 or more in each. Expect a low-scoring game that could go either way. Cornerstone 22, Snook 15

The Coosa Valley Rebels snapped an 18-game losing streak last week with a 26-14 win against Lakeside. Now, the Rebels have a chance to make it two in a row against a Fort Dale team that is 0-4 this season and has scored 14 or less in every game. The Rebels have played well early in the season, even in two losses, and should now start a winning streak. Coosa Valley 26, Fort Dale 13

It’s a big week for the Evangel Lightning. Now sitting at 4-1 on the season, the Lightning will take on Freedom Academy this Friday in their first big in-state test. Freedom is 5-0 on the season and has scored 32 or more in every game and given up 28 or less in every game, including seven or less in three of five. Evangel, outside of a loss to last year’s Tennessee state champion, has scored 40 or more in every game too and the defense is playing well. The Lightning missed out on last year’s ACSC state championship, and this game will go a long way in determining their chances this year. I expect Evangel to use that as fuel in a tight battle. Evangel 47, Freedom 41