The Helena Huskies will travel to county rival Pelham on Friday night to battle for first place in the region. (For the Reporter/Jeremy Raines)

The last time they met on the field, history happened and the rivalry between Helena and Pelham blossomed into one of the state’s best.

That moment came two years ago on Oct. 25, 2109, when the Helena Huskies beat Pelham for the first time in school history, and did so in convincing fashion by a final score of 62-20.

Now, after last year’s game was forfeited by the Huskies due to COVID-19, the two will meet once again this Friday, Sept. 17, and it may be the biggest matchup between the rivals to date. 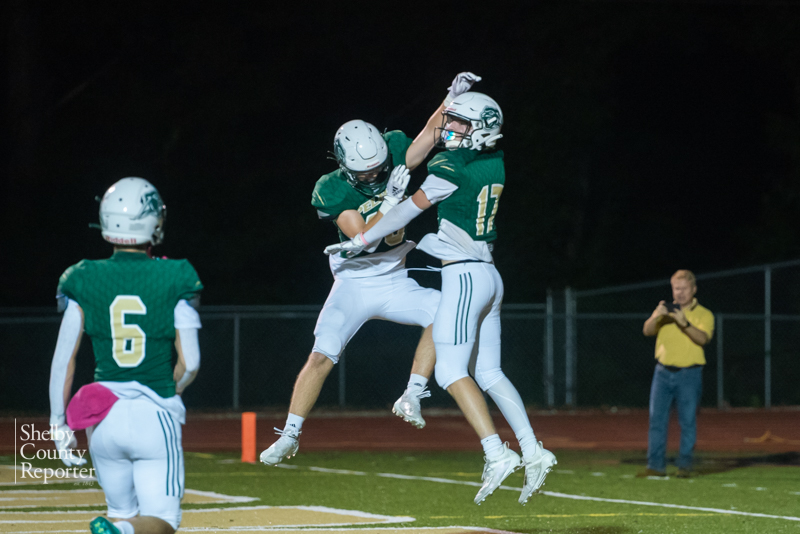 Not only have the Panthers had two years with the taste of a blowout loss in their mouths, but the Huskies feel like being forced to forfeit this game kept them from a region championship—a title Pelham won last year with a perfect 6-0 record.

Helena, however, finished second in the region with a 4-2 record despite that forfeit loss. Should the game have been played and the Huskies won, they would have taken the head-to-head tiebreaker to win their second region championship in a row.

Now, both feel gipped at missed opportunities from last year—the Panthers for revenge and the Huskies for their shot at repeating as region champs.

That just adds fuel to the fire for two teams who used to be one school, making this year’s rivalry battle one of the can’t-miss games of the 2021 season with a region championship possibly at stake once again depending on how each finishes the season.

In addition to all of that build up, the two teams are talented once again this year from many different standpoints.

For the Panthers, they return most of last year’s region championship talent and it has paid off for the most part this season.

Despite some inconsistencies on both sides of the ball through the first three games, Pelham went 2-1 through that stretch with the lone loss coming to Class 7A No. 9 Oak Mountain 21-0 in a game that was tied 0-0 at the half.

The team then carried some of those struggles into the first half against Calera a week later, going into the half down 20-7, but a switch was then flipped and the Panthers came back with a dominant second half to win 34-30.

When the offense is clicking, the team seems to roll. When the offense struggles, the defense has at least kept the Panthers in the game, but that only lasts so long until they wear down.

As a matter of fact, the defense has been almost 15 points better per game so far this season compared to what it was last year.

With Will Lankford, Gabe Gamble, Christian Pritchett and Jake Fox, among others, the Panthers have the offensive talent to play like they did in the second half against Calera and like they did in a 42-6 opening win against Mortimer Jordan this season. Doing so in this matchup will be key against the toughest defense the Panthers have faced this season.

And the defense has been the highlight so far for the Huskies.

Last year, they did pick up a shutout against Dallas County in the opener, but then gave up 27 and 28 the next two weeks in two losses by six points or less.

Now, not only did they improve to 3-0 versus 1-2 this year, but the defense followed its opening shutout by giving up 14 and 10 to Chelsea and Wetumpka this year.

Through the first three games, the Huskies had given up just eight points per game, which was key against both Chelsea and Wetumpka with the offense still forming experience with young players.

The offense, however, has seen improvement each week with an offensive line that is gaining experience, a young running back in Jordan Washington starting to gain traction and the connection of Mac Turner and JC Sivley becoming dangerous.

It’s a unit that pairs well with a physical and talented defense to help wear down teams.

Going into this matchup, the stage is set for the two rivals to put together a slugfest.

Both defenses are playing extremely well, while the offenses have been inconsistent at times early in the season.

One could have a coming out party, and the Panthers definitely have the experience advantage on that side of the ball.

The only advantages I can find are for Pelham. In an otherwise even matchup, the Panthers have the experience, they want revenge from two years ago and they’re on their home field.

The last of those may be the biggest factor with Helena playing its first four games of the season at home. That makes this their first road game of the season, and it’s not the first game you want to play on the road.

There is no clear favorite, but that’s at least enough to give me a lean toward Pelham in what should be a thrilling rivalry battle that I’m sure we all home goes down to the final minute.

By ALEC ETHEREDGE | Managing Editor MILLBROOK – The cardiac cats were up to their usual mischief on Friday night,... read more