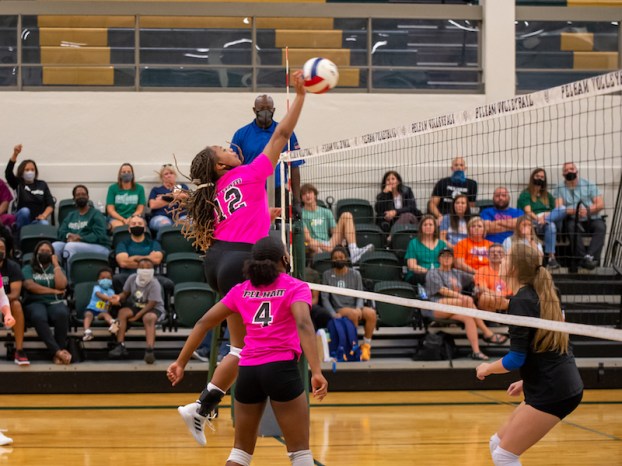 Pelham’s volleyball team is nearing 20 wins on the season after winning 15 of 16 matches following a 3-1 win against Oak Mountain on Thursday, Sept. 9. (For the Reporter/Larry Dancy)

PELHAM – It is becoming more evident as the season goes along that the Pelham Panthers are returning to the form of being a state championship contender, and that was no more evident than in a win against Oak Mountain on Thursday, Sept. 9.

The first set of the match, however, wasn’t how the Panthers hoped to start in the battle against a talented Oak Mountain team.

Pelham never could gain momentum in the match, and trailed by 10 points on multiple occasions, eventually losing 25-15 to fall into a 1-0 hole right off the bat.

Forced into an uphill climb, the Panthers needed a big effort in the second set and they got it.

After battling to a 6-6 tie in the early going, a big kill from Elizabeth Hayhurst sprung the momentum into Pelham’s favor.

The Panthers held the lead for much of the set from that point forward, eventually gaining set point at 24-19 after a kill from Averi Smith. They finished off the set one point later to even the match at 1-1.

The third set, however, was the key set.

With the winner of the set taking a 2-1 lead in the match and forcing their opponent into a situation of needing two wins in a row, they would earn a major advantage.

An ace from Hayhurst on the next serve, however, continued a good run for the Panthers and helped continue a momentum swing.

Pelham went on to win 10 of the next 14 points played to finish off a second consecutive 25-19 set win when Tammy Melendez grabbed an ace, which gave the Panthers a 2-1 match lead.

In the early portion of the final set, the two teams traded points once again, but with the Panthers having the comfort of the lead, they played with much more confidence.

That led to the most dominant set of the night in a 25-15 win finished by an emphatic kill from Shay Walsh to end the 3-1 win.

Hayhurst led the Panthers with 16 kills, while Smith added 12 kills. Victoria West, Courtney Proffit and Camryn McMinn all had six kills in a consistent effort.

The team also totaled 13 aces with Melendez leading the way at four. Behind her, Smith and Walsh each had three.

Smith and Melendez also led the way with 12 and 11 digs, respectively, while Walsh totaled 37 assists in a strong effort with Melendez finishing second with six.