The amazing spirit of our volunteers

Led by the United States Department of Health and Human Services’ Administration for Community Living, May was recognized as Older Americans Month. The theme for 2021 is “Communities of Strength.” The word old is defined as having lived a long time. According to Medicare, a senior is an individual 65 years or older. In general, once a person has turned 55 years old, they start to enter the senior age demographic.

The RSVP family consist of 1010 men and women ages 55 to their 90s, including some centenarians. The brainchild of RSVP coordinator Marvin Copes, the newsletter just completed its fifth volume. Since 2016, at least 170 volunteers and host agencies have been featured in the RSVP newsletter. 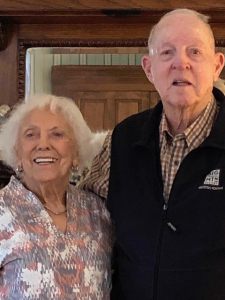 Every volunteer has lived through failures, successes, joys and sorrows. Each experience has made them stronger and more resilient. Their testimony inspires all who hear their story through their article. Today’s column recaps the story of some of our amazing volunteers. It will focus on the amazing spirit embodied in those who serve their communities, families and nation.

Green Beret Ronald Alexander Jefferson served five consecutive tours of duty in Vietnam with the 5th Special Forces. Ron mentors young men and women who have returned from Afghanistan and Iraq as well as older vets, helping them acclimate back into society. Jefferson was awarded the Alabama Senior Citizens Hall of Fame Military Service Honorary Award in 2017.

Dynamic Duo Patricia (Pat) and William (Bill) Wyatt committed their time and energy to Wreaths Across America and Blue Star Salute. Bill was a founding member of the Support Committee for the Alabama National Cemetery where Pat volunteered alongside her husband. Pat is president of Chelsea/Westover Homemakers and Community Leaders. She is also president of the Dystonia Support Group of Alabama and works with the Dystonia Research Foundation. Bill, a four-stripe Staff Sergeant Air Force veteran, passed in January of 2021. Bill and Pat were married for 60 years.

Dr. Tommie Ruth Harrison has been a RSVP member since 2004 and earned Lifetime Member status. In 2016, she received the RSVP Spirit Award. Harrison volunteered in a number of areas, including gardening groups, libraries and wildlife care, and was a volunteer at Shelby Baptist Medical Center.

Dynamic duo Oliver and Ann Head volunteered with Meals on Wheels for decades, taught Sunday School and Summer Bible School at Columbiana United Methodist Church, and supported the Skillet Bird Christmas toy fund. Ann supported youth through the Columbiana Culture Club, as well as Ronald McDonald House, UAB Hospital, and the Arts Council. The Heads have been married for 67 years.

Lending a hand to those truly in need