When they were stars on the field at Helena, Richard Fitts and Sam Praytor both dreamed of the MLB, but neither expected to be taken four picks apart in the 2021 MLB Draft.

That’s exactly what happened on Monday when the two heard their names called just minutes apart during sixth round of the draft.

Adding to the story, the two sit on opposite sides of one of the greatest rivalry in sports with Praytor at Alabama and Fitts at Auburn.

But now, the two have come full circle to have an opportunity at chasing down their dream. 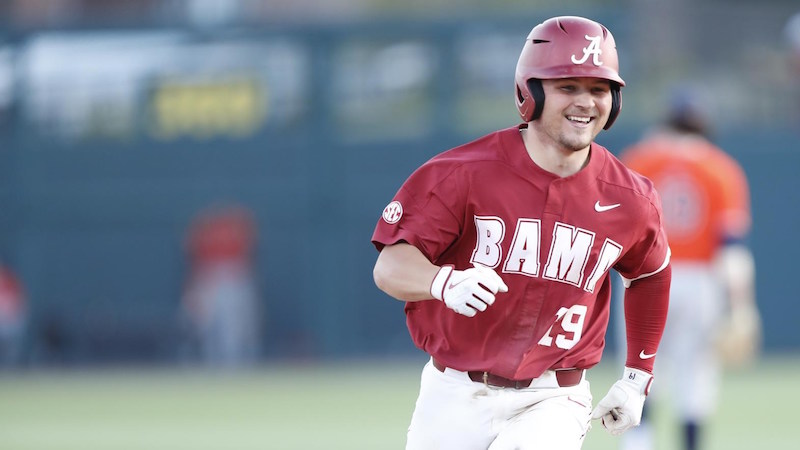 Praytor, a catcher for the Crimson Tide, was the first name called of the two when he was picked 179th overall by the Miami Marlins, which is valued at $274,800.

Four picks later, Fitts, who is a pitcher for the Tigers, was selected 183rd overall by the New York Yankees—a pick valued at $266,000.

During high school, both players received their share of accolades after graduating one year apart from Helena.

Praytor, a 2017 graduate, made the All-County first team his junior and senior seasons, while also being named a co-player of the year as a junior.

During his junior season, he averaged .454 at the plate behind 54 hits and 13 home runs, which led to 44 RBIs as the best offensive player in the county.

Then, as a senior, he improved his average to .458 with 15 doubles and a county-high nine home runs, while also driving in 20 runs on 55 hits. Those numbers earned him the Class 6A Hitter of the Year award and a spot on the Super All-State team as the sixth best player in the state.

That led to him becoming one of the top prospects in the country and a rising star when he left for Tuscaloosa.

As a freshman, he led the team in walks and on-base percentage during SEC play to make his name known immediately. He batted .279 at the plate that year with 41 hits, including six doubles and 16 RBIs.

Praytor only played in six games as a sophomore before suffering a season-ending arm injury, which led to a redshirt season.

As a redshirt sophomore, he was off to a soaring start in 2020 with an average of .350 at the plate, which was third on the team, thanks to 21 hits and a team-high six home runs with 18 RBIs. The season, however, was cut short after 17 games due to COVID-19.

This past season, however, he responded with a career-best 59 hits for the Crimson Tide, which finished third on the team. He also led the team in home runs with 14, giving him a team-high slugging percentage of .531.

Those junior-year numbers earned him a spot as a Third Team All-American by Collegiate Baseball News.

The impressive numbers helped Praytor’s draft stock rising, which led to him being selected by the Marlins with the 179th pick and the third-highest catcher ever picked from Alabama. 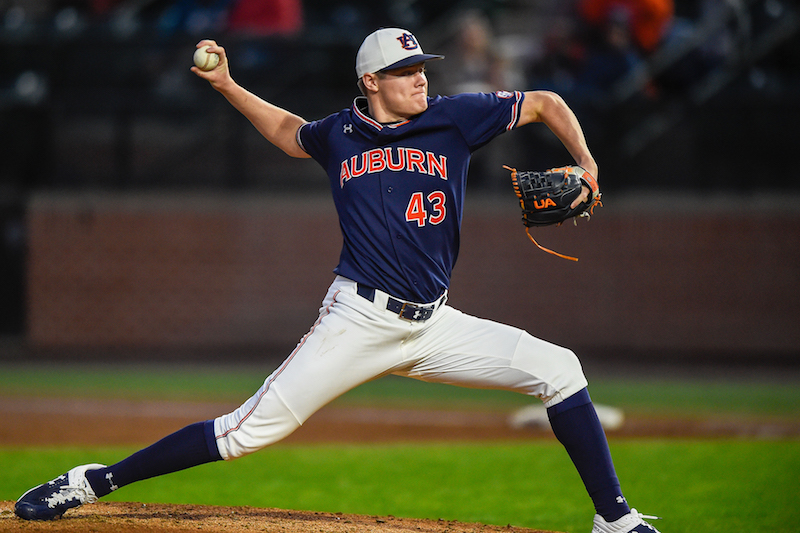 Fitts has also left his mark both at Helena and Auburn with his standout arm.

As a senior in high school, he burst onto the scene as one of the top pitchers in the state when he tossed 102 strikeouts in 74 2/3 innings. Fitts finished the season with an ERA of 1.68 and gave up just 20 walks in his time on the mound.

After graduating in 2018, he moved on to Auburn and made a quick impact for the Tigers.

He appeared in 21 games, making five starts. In that time, he posted a 5-3 record and 47 strikeouts, which was fourth on the team. Fitts also made several big postseason appearances in regionals and super regionals that year before pitching in the College World Series, giving up two combined runs in 5 1/3 innings.

Then, during a shortened sophomore season due to COVID-19, Fitts got off to an impressive start in 2020 behind a 1-0 record in one start. He made five other appearances and held an ERA of 2.77 with 16 strikeouts in 13 innings pitched.

With a combined 6-3 record and 4.88 ERA through two seasons, he earned a Preseason Second Team All-American nod by D1 Baseball heading into 2021.

He was also projected as a late first-round pick at times by draft analysts.

An injury, however, after prevented him from as many appearances and from showcasing the talent he had the previous two years.

He did end up pitching in 13 games with eight starts, finishing the season with an ERA of 5.88 and a record of 1-3. In 41 1/3 innings pitched, he totaled 41 strikeouts, which was fifth on the team by just five strikeouts despite limited action.

Following the injury, he did come back to have a strong performance against Alabama with seven strikeouts in 4 1/3 innings against the Crimson Tide to help force extra innings.

He did the same against Missouri in eight scoreless innings, which earned him the SEC Pitcher of the Week honor.

Despite some ups and downs during the season due to the injury, he still did enough to be drafted by the Yankees with the 183rd pick in this year’s draft.

Neither has said whether they plan to return to their respective school or join the pros.

By ALEC ETHEREDGE | Managing Editor  COLUMBIANA – Rocking back and forth in his office chair with a Winnie the... read more