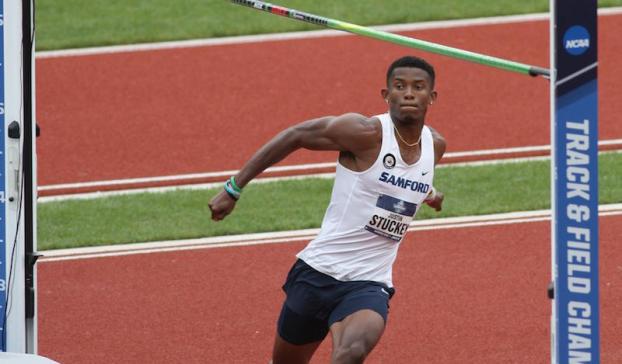 Justin Stuckey is set to compete in the Olympic Trials as one of the top high jump athletes in the country on June 25. (Contributed/Samford Athletics)

A year ago, Justin Stuckey didn’t take it seriously.

Now, the Samford athlete and former Helena High School standout has a chance to qualify for a spot in the 2021 Olympics after earning a spot in the Olympic Trials for high jump.

“It has been shocking to see,” Stuckey said. “I’ve been a guy that sets goals and is confident in achieving them. But I never knew I could take off this much in track. I just thank God and I try to be ready in the moment.”

Stuckey, who started track and field in middle school, said it never was his main focus with basketball and football being what he poured his time into in high school.

“I just did track in middle school because the girls were out there,” he said with a laugh. “Then in high school, I did it more to stay in shape. I was pretty good at it, but I was always focused on pouring my time and energy into other sports.”

Stuckey went on to join the 1,000-point club in basketball during his junior season at Helena and went on to average 15 points, six rebounds and three assists per game his senior season to earn a spot on the All-County first team.

He also totaled 855 yards and seven touchdowns during his final season on the football field and averaged 19 yards per catch to earn a spot on the All-County second team.

“My mindset was not on track at all for like a year into college. I’m a competitor and athlete, but there is a difference when you’re not all the way committed to the sport,” he said. “All the energy and time I was putting into basketball and football, I had to turn that into track. That’s when I started to get excited about it.” 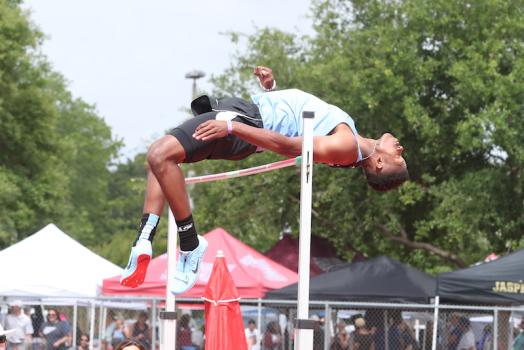 Stuckey competes during the 2018 track and field championship when he won a state title for clearing 6 feet, 10 inches. (For the Reporter/Dawn Harrison)

Now, Stuckey has a chance to qualify for the Olympics in Tokyo when he competes in the Olympic Trials starting June 25.

“This shows me God had a way different plan than what I thought,” he said. “I had everything planned out for myself and what I wanted to do. I wanted to be real successful in these other sports. Now, I’ve shifted my mindset.”

Stuckey just finished competing in the national championship in Eugene, Oregon where he finished 15th in the high jump with a height of 7.5 feet. He couldn’t help but be overcome with excitement to travel across the country on a free trip to Oregon just to jump over a bar.

Injured a year ago, Stuckey has regained his strength in the offseason due to COVID-19 ending the 2020 season early.

But he didn’t stop training and pushing himself.

Stuckey credits his rise to one of the top high jumpers in the country to the dedication he has put in over the last year.

During the pandemic, he got kicked out of Helena, his hometown, three times trying to train, then went to Heardmont Park in north Shelby County and bounced around from there to Hoover and Spain Park high schools.

“You weren’t supposed to be out, but I looked at it as an opportunity to show my hunger,” Stuckey said. “The pandemic brought the opportunity to stay the same, get worse or get better. It took a lot of discipline to stay motivated because we didn’t have to be doing anything, but I wouldn’t be in a position to qualify for a spot in the Olympics if I hadn’t pushed myself.”

That led to an All-American season for Stuckey, who set the school record in the high jump at 2.21 meters this season to earn a spot in the national championship where he cleared 7 feet once again to finish in the top 15.

“He’s one of the most driven, focused and passionate young men that I have had the opportunity to coach,” said Chris Laatsch, Stuckey’s former basketball coach at Helena. “He understands the daily investment and sacrifices necessary to reach his potential. I am so proud of him.”

He just missed being one of the automatic qualifiers for the Olympic Trials at the NCAA National Championship, but did get a bid to participate as one of the top 24 in the country thanks to one of the top marks.

“I get to compete against professional athletes, Olympians High level college guys. I guess I’m one of them now,” he said, stunned. “It’s going to be a fight.”

Stuckey, however, won a state championship at Helena after clearing 6 feet, 10 inches, won the SoCon Championship this year after clearing 7 feet, 3 inches, and has now competed against the best college athletes in the country and finished 15th despite not having his best day.

“I just started taking this sport seriously last year,” he said. “I didn’t know it was what I was supposed to be doing, but now I do. I was already in a small percentage of competing in Division I sports, then to excel and then go on to compete against professionals. I had football and basketball goals, but never track aspirations, now I have to keep them going to reach further heights.”

Stuckey said he knows the Olympic Trials won’t be an easy task, but that he isn’t planning on getting caught up in reaching a certain height.

Instead, he wants to enjoy this moment and get back to enjoying himself.

“I’m ready to get back to feeling like normal. At nationals, I didn’t put up the numbers I wanted to because I focused too much on a certain number,” he said. “There is nothing to lose at this point. I’m in the top 24 of jumpers in the U.S., I can’t complain. I’m just ready to make a name for myself and do what I’ve been doing since the eighth grade. If I make the Olympic team, that would be so cool. But even if I don’t, what I leave out there, will be a special memory to soak in.”

The Olympic standard is currently 7 feet, 7 inches and four people already have that mark. In order to qualify for the Olympics, Stuckey will likely have to reach at least 7 feet, 5 inches to have a chance, but he knows anything can happen.

“I’m not trying to get too caught up in that, I’m just trying to establish myself and represent my name and city,” he said. “I know anybody can get beat, but if I worry about that too much, it will take away from my jump. I just want to jump as high as I can.”

Regardless of the outcome, Stuckey can’t believe he has gone from not giving the sport his full focus, to training around different parks during a pandemic, to competing in Eugene for the second time in three weeks for a spot in the Olympics.

By SCOTT MIMS / Staff Writer MONTEVALLO — There’s nothing like heading out to the local farmers market and browsing... read more