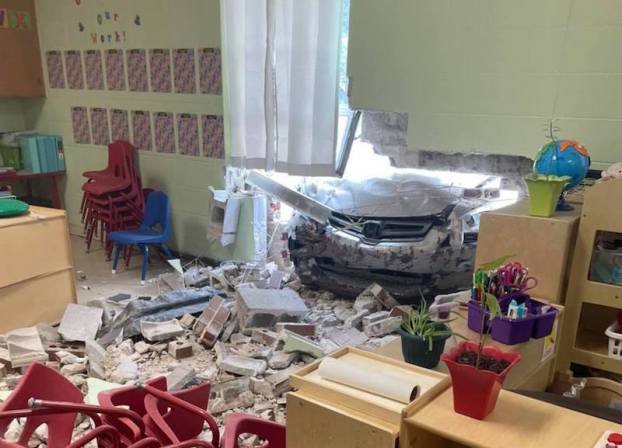 Around 12:30 p.m. on Monday, June14, teachers were rocked at South Shelby Baptist Learning Center in Calera by an unexpected crash.

Due to an undisclosed medical emergency, a car left the roadway at the intersection of County Road 25 and 14th Street before crashing into the side of the building.

Teachers on campus at the time, however, remained calm in the situation and made sure everyone was safe while Calera Police Officers responded to the situation.

According to the Calera Police Department, the car went through an exterior wall into a classroom, but no students or teachers were present in the room.

“First off, God’s hand of protection was over us all,” read a statement from the learning center. “Normally we would have our summer campers playing outside, but due to the heat they stayed in.”

It was also a blessing that due to the summer break no pre-K students were in the classroom that was impacted, preventing injuries as cement blocks and debris, including glass, flew into the room following the car’s impact.

“Our teachers remained calm and ensured the children were safe and calm as well. Thank you Lord for protecting us,” said the learning center.

The driver, who police say crashed into the building because of a medical situation, was taken to the hospital.