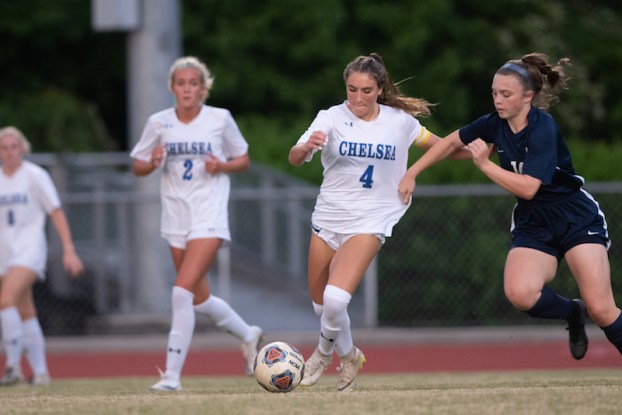 Haley Duca put together a record-setting year for the Chelsea girls soccer team, which earned her this year's Alabama Girls Soccer Gatorade Player of the Year award. She's the first athlete from any sport to win the award at Chelsea High School. (Reporter photo/Keith McCoy)

CHELSEA – The last time she walked off the field at Chelsea High School, she did so in the steps of a history maker taking strides to hug her coaches and teammates on April 27, following a record-setting performance.

On that night, Haley Duca scored six goals in a 10-0 playoff win against Mortimer Jordan to set a school record for most goals scored in a single game. That sixth goal also made her the first in school history to reach 100 goals for either the boys or girls soccer team.

Now, the Chelsea graduate and former soccer star for the Hornets has received one more historic honor by being named the first Gatorade Player of the Year from Chelsea High School in any sport.

Gatorade announced the award on Tuesday, June 15, with Duca winning the state of Alabama’s Girls Soccer Player of the Year award.

“It means literally everything. Starting from the beginning, I always knew what Gatorade player was,” she said. “At the beginning of last year, that was a goal of mine, not just for myself, but for everyone else. If I win that award, it’s because everyone is working hard around me. Every piece of the puzzle fit together—my teammates, coaches, friends and family. Without them, I wouldn’t be in this situation.”

And by setting that goal, she went on to become a legend at Chelsea High School as the first athlete to win the award, something she had no clue about.

“I did not know that until this morning. That is very cool. I definitely put my name in the record book for all sports,” Duca said. “There are so many good athletes that have come through Chelsea. Even just in soccer, my sister and others have been really good. Same with the guys soccer and other sports such as baseball and basketball with guys like Carter Frederick, Connor Ball, (Joe) Lanzi. There are so many good players that people haven’t realized.”

Thankful she was the first one to receive the honor at the school, she thinks it could be something that helps Chelsea gain more respect moving forward.

“I think this will help put Chelsea on the map even more,” she said. “We’ve kind of been there, but we are getting bigger and bigger, and for these younger athletes coming up, this gives them a lot more confidence and they’ll be respected more. Our athletes are very talented and I think that will be seen more and more moving forward.” 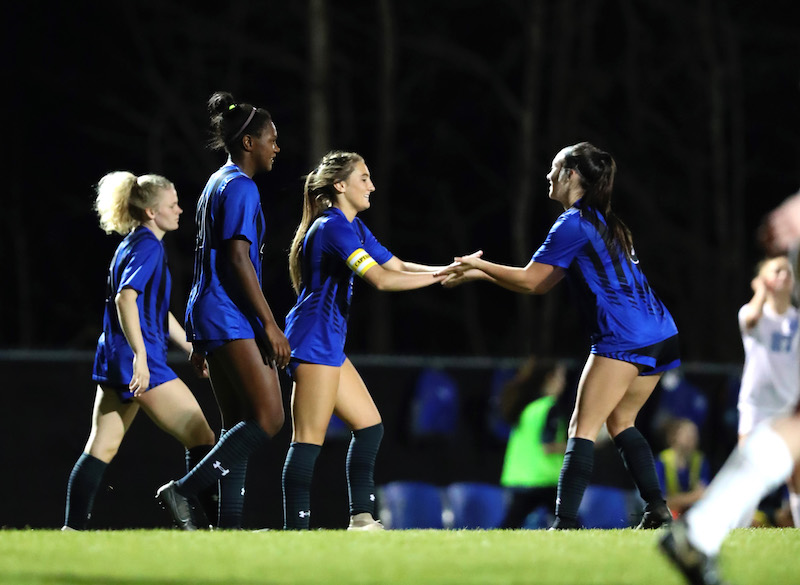 Duca’s season started out as uncertain as any athlete’s did this season due to the unknown of how the season would go due to COVID-19.

Head coach Jonathan Hammett pulled her aside before the season, however, and told her she would have to be a big leader from both a vocal and uplifting standpoint, while also being one of the team’s top goal scorers.

“My whole thing this year wasn’t just how can I be successful, but how to help the team be successful,” Duca said. “It’s about making an impact on other people, because it takes a team to be successful.”

The coaches, however, came together and decided to make some changes.

Duca moved to the midfield midway through the season after a 0-2 start to area play. And that’s when the team started to click.

“Not only did I start scoring more, but it also opened up a lot of the field for others,” she said. “I was fine scoring or pulling defenders away to give others the opportunity to score.

Chelsea went on to win nine of its next 10 games, including all four area games left on the schedule to earn a spot in the postseason.

Then, on April 27, she put together the record-setting six-goal performance and reached the 100-goal milestone, which was a moment she said she’ll never forget.

“I got five of my goals in the first half. Coach Hammett actually announced to the team that I was at 99 and they wanted to get me that one goal,” Duca said. “It took me 20 minutes in the second half to get the goal. It felt like forever. It was really special though. As soon as it happened, they took me off and I walked off the field for the last time. I gave coach Hammett a hug, gave my dad a hug and my teammates a hug.”

“Haley has excelled in the classroom and on the soccer field since she was a freshman,” Hammett said. “This award recognizes all of those successes. The key to it all has been her elite work ethic. Haley has a natural ability, but that will only take one so far. She committed to and maintained that level throughout her career and will take that to Auburn this fall. She was a difference-maker.”

Hammett mentioned all of the historic marks of the girls soccer program, including the first state championship appearance in 2011, the first title in 2012, playing in a total of four state titles and now Duca being named the Gatorade Player of the Year, and said he hopes this milestone is just one in a continually growing list.

“I especially want to thank coach Hammett,” Duca said. “His constant support and impact on me throughout my four years at Chelsea is a main contributor to all of my success and awards.”

Duca also thanked Mountain Brook head coach Adam Johnson, who took the time to talk about her success and talent in the Gatorade nomination.

“His kind words meant a lot, especially from a competitor,” she said. “It just shows that you never know who is watching. You can always have an impact on others.”

As she heads off to Auburn to play for the Tigers in Southeastern Conference play this fall, she is excited, but knows a piece of her will always be a Chelsea Hornet.

“I used to not be as happy go lucky. I used to be very, very competitive,” Duca said. “I still am, but just playing for Chelsea and having the shield on my chest and those two stars. You walk around now, and you’re prideful you played for Chelsea. It’s a big family environment in any Chelsea sport. Everyone really does care about you. Now that I’m leaving, I’m leaving behind a legacy now that I think they’ll keep up. I’ll always hold a special place in my heart even when playing at Auburn. Chelsea has turned me into who am.”

By ALEC ETHEREDGE | Managing Editor PELHAM – One of Shelby County’s most dynamic soccer players has been honored as this... read more