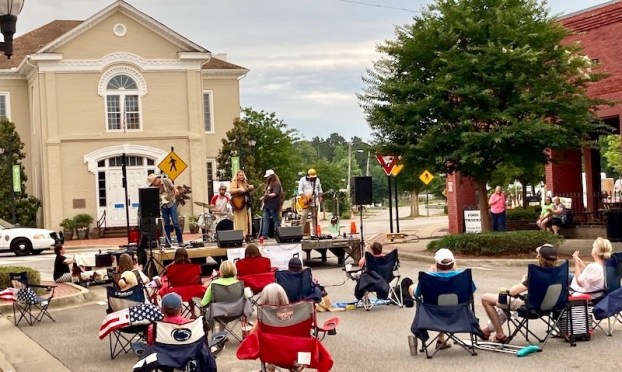 COLUMBIANA — The city of Columbiana hosted its inaugural Music on Main event the evening of Friday, June 4.

The tunes of Taylor Hunnicutt and band echoed off the buildings along South Main while people enjoyed the festivities in their lawn chairs. Several area businesses kept their doors open late for the event, which was the first of several planned for the summer. There were also vendors and food trucks on hand.

Hunnicutt performed several originals plus a few covers, including Fleetwood Mac’s “Rhiannon” to the delight of the crowd.

New Columbiana Main Street Director Brittany Davis said she was pleased with the event’s turnout and is optimistic about the future.

“I think Taylor Hunnicutt was a great one to kick it off. She was fun and it brought out a decent crowd. I hope that we can gain more traction,” Davis said.

The next Music on Main events are scheduled for June 11 featuring Allen Tolbert and Friends, followed by June 18 featuring The Divines. Tolbert is known for his bluegrass while The Divines are an electronic dance funk cover band.

Other summer plans in store for the city of Columbiana include the annual Liberty Day Celebration on Friday and Saturday, June 25-26; and Movies in the Park at Old Mill Square Park starting July 4. Liberty Day festivities will also include a 5k and 1-mile fun run the morning of Saturday, June 26.

“The idea is that it will bring people out to see what Columbiana Main Street has to offer,” Davis said. “I know last Friday was a good testament to that. I think we are on the right path, and we plan to do the other two (Music on Main events) and then we’ll kind of reassess the situation and see if we’re achieving our goals.”

For updates on these and other events, visit the Columbiana Main Street Facebook page.