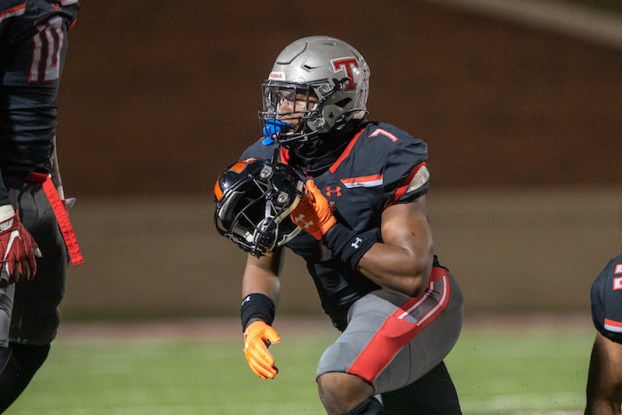 The Thompson Warriors will field some of the top recruits in the state and country this season, including linebacker Jeremiah Alexander, while several others schools also have players to keep an eye on. (Reporter photo/Keith McCoy)

Local schools have some of state’s, country’s top recruits

With the 2020-2021 sports season now officially in the books, there is no time for a break as the 2021-2022 season is quickly approaching, which means some of the top recruits in the country hitting the field once again this fall.

It will be tough to follow some of the talent that was on display a season ago across the county, but several top recruits are either returning or making their names known early this summer thanks to on-campus visits and different camps.

Two different schools have ranked players going into the 2021 season from either a state or national standpoint, while several others have players receiving major attention early this summer from major universities.

Back-to-back state champion Thompson continues to have arguably the most talented team in the state with eight combined players ranked either nationally or in the state for the classes of 2022 and 2023.

The Warriors have three nationally-ranked players already on their roster going into season, while the Anniston Star reported on Tuesday another national recruit is moving to Alabaster from Oxford to join Thompson.

Alexander has been playing since his freshman year as a linebacker or defensive end and has more than 300 tackles, more than 70 tackles for loss and more than 20 sacks in that span.

Joining him this season as nationally-ranked recruits will be 2023 prospects Peter Woods and Tony Mitchell, all on the defensive side of the ball.

Woods, a defensive lineman, is the No. 1 player in the state for the class of 2023 and the No. 2 player nationally, while Mitchell is No. 3 in the state and No. 14 nationally.

All three of those defenders are four-star athletes with offers from many of the top schools in the country.

Alexander, a one-time Alabama commit, has gone on visits this summer to Clemson, Georgia and Alabama, and has offers from many more of the top schools.

Woods, who missed most of last year with an injury, has also visited Alabama, Clemson and Georgia so far this summer. During his freshman season, he totaled 15 tackles for loss and seven sacks, and was set for another big season last year before the injury.

But his recruitment hasn’t slowed down. In addition to those three visits, he has offers from the likes of Auburn, Florida, Michigan, Florida State, LSU, Miami, Tennessee, Oklahoma and many more of the country’s top football programs.

The same can be said for Mitchell, who is one of the top cornerbacks in the country for the class of 2023.

Mitchell, who has started since his freshman year with the Warriors, was originally a true cornerback, but showed last year that he can slide into the middle of the field as a nickel back or safety.

Just as ferocious at hitting as he is in coverage, he totaled four interceptions last year as well as eight tackles for loss and 75 total tackles.

Trequon Fegans, whose father said the family is leaving Oxford and enrolling at Thompson, is ranked 72nd nationally and fourth in the state for the class of 2022 and would be another welcome addition to the Thompson defense this season.

The Warriors also have three-star recruits who are ranked statewide going into the season, including returning quarterback Conner Harrell as well as Jaylen Ward, Trevor Hardy and David Moultry.

Harrell is the 28th ranked player in the state going into his senior season and will be one of the top quarterbacks in the state after throwing for 3,405 yards and 40 touchdowns as a junior.

He has offers from Arizona State, North Carolina, Northwestern, Vanderbilt, Louisville, Tennessee, Harvard, Duke and many other schools.

Ward and Moultry, who were two top targets for the Spain Park Jaguars last year, are ranked 31st and 57th, respectively, in the state as 2022 receiver prospects.

The Warriors also return both Trevor Hardy and Jax Van Zandt to the defense this season. Hardy is ranked 47th in the state and has several college offers, while Van Zandt isn’t ranked but is considered as the leader of the defense and returns more than 90 tackles and 10 tackles for loss. 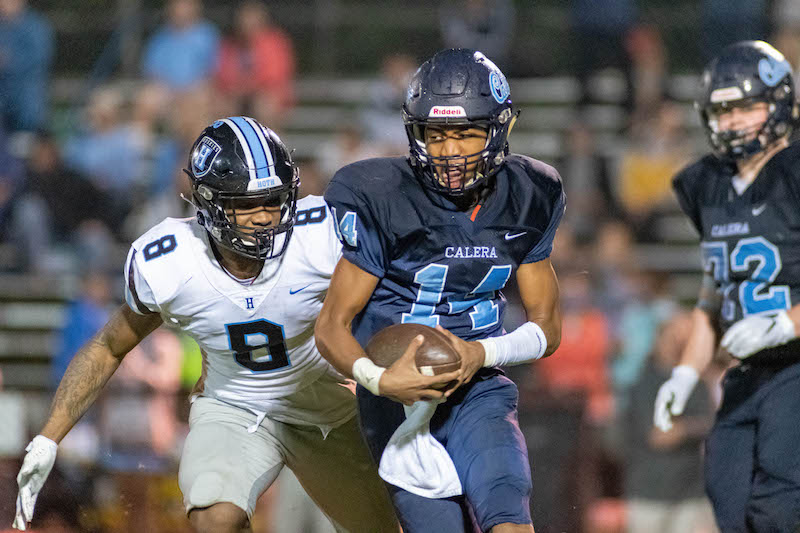 Helena’s Iceberk Cave, No. 8, is ranked 44th in the state ahead of the 2022 season. (For the Reporter/Neal Wagner)

Only one other team in the county has a player ranked and that’s Helena’s Iceberk Cave.

Cave is ranked 44th in the state and as the 124th best linebacker in the country. He has offers from Tennessee, Georgia Tech, South Florida, Virginia, Indiana and several others.

Beyond the ranked athletes, however, several other names are on the radar of many of the top schools in the country with athletes from Briarwood, Calera, Chelsea, Oak Mountain and Spain Park all making waves. 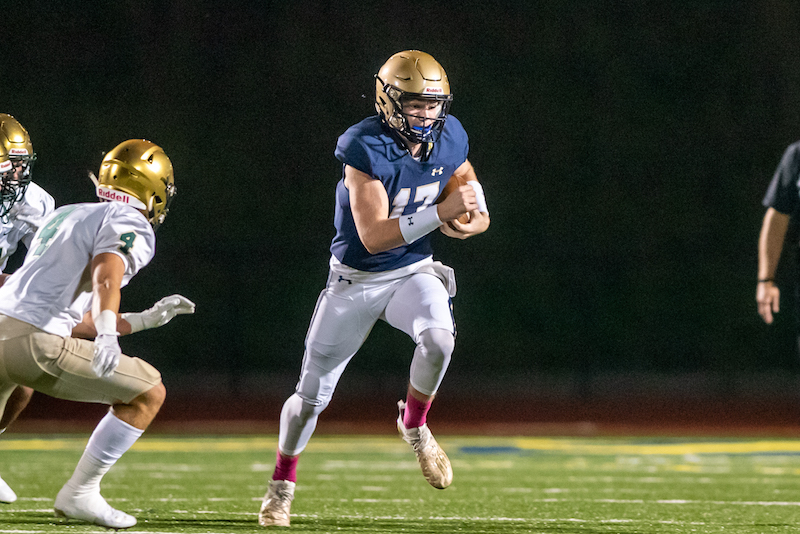 At Briarwood, Christopher Vizzina has taken off like a rocket in recent weeks.

Going into his third year as a starter, the junior quarterback hasn’t had a ton to work with from a receiver standpoint, but has shown a ton of intangibles at the position.

Participating in camps and an Elite 11 event, college coaches have liked his build and arm, which has led to offers from Duke, Georgia Tech, Louisville and several others with elite teams showing interest.

Calera’s Kobe Prentice is another athlete who has been flooded with recent offers as a talented receiver for the Eagles. After totaling 711 yards and nine touchdowns on just 41 receptions last year, he has received offers from Arizona State, Kansas State, Maryland and many others.

Chelsea also has two players to keep an eye on from a recruiting standpoint, as their stock continues to rise this offseason. Lineman Emmanuel Waller recently received an offer from Mississippi State, while Thomas Simpson is starting to gain a lot of attention as a receiver.

Oak Mountain and Spain Park also offer two recruits to keep a heavy eye on going into the 2022 football season.

Evan Smith, who has arrived to his final season as a starter for Oak Mountain, has put together a special four years as quarterback for the Eagles.

He actually led the county in rushing last year with 1,719 yards and 23 touchdowns on the ground, while also adding 620 yards passing in an option attack.

Smith has offers from schools such as Army, Coastal Carolina, Duke, Harvard, Tulane, UAB, Virginia and several others.

TJ Metcalf will be one of Spain Park’s top players this season as a member of the class of 2023.

A safety for the Jaguars, Metcalf is the cousin of NFL receiver DK Metcalf and has one offer from Tennessee right now with several others showing interest in what he will do as a junior.

Those are just a few of the athletes to watch for on Friday nights under the lights this fall, but several others will emerge throughout the summer and during the season in one of the most athletic counties in the state.

By ALEC ETHEREDGE | Managing Editor A total of 29 athletes from high schools across Shelby County have been announced... read more