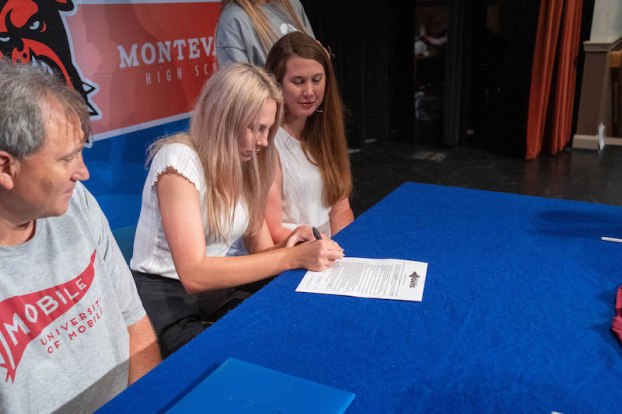 Montevallo’s Olivia Jackson signs her letter of intent to play volleyball at the University of Mobile. (Contributed)

MONTEVALLO – Montevallo High School recently celebrated two female athletes who put in extra work to make sure they had an opportunity to compete at the next level.

Olivia Jackson and Riaunna Inabinette, who were both volleyball stars for the Bulldogs, are now headed to play the same sport collegiately after making it official at recent signing ceremonies.

In front of family, friends, teammates and coaches, the two standouts recently signed their letters of intent with Jackson signing to compete at the University of Movile and Inabinette signing to play at Carolina University in Winston-Salem, North Carolina. 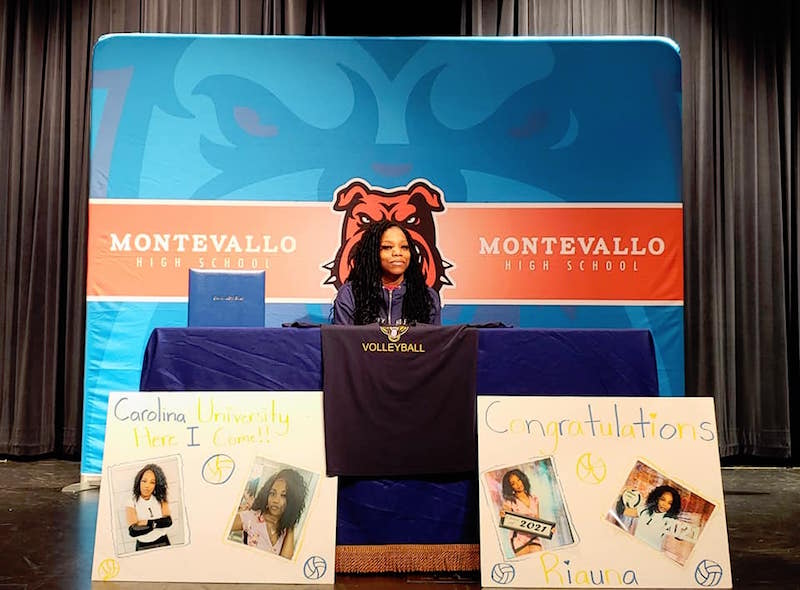 Riaunna Inabinette is headed to play college volleyball at Carolina University after a special four years at Montevallo. (Contributed)

Both had standout senior seasons competing for the Montevallo volleyball team, helping the Bulldogs claim the Class 4A Area 5 championship, which led to recognition for their effort on the court.

Jackson was named to the All-County second team as the team’s leader and captain this past season.

“Olivia is a very hard worker. She has been a great team player since she arrived at MHS,” head coach Tena Niven said. “I know she is going to be successful in both indoor and beach volleyball at the University of Mobile. I am so proud of her.”

She was also named to the all-tournament team for her play in the Central-Tuscaloosa tournament and was selected as the MVP of the area tournament. She also competes in beach volleyball.

Inabinette was a four-year letter winner for the Bulldogs and was named to the all-area tournament during her senior season as well as an honorable mention on the All-County team.

“Riaunna has worked very hard to have the opportunity to play college athletics,” Niven said. “She and her family diligently searched for the best school and fit. I know she will be successful as a Bruin, and I can’t wait to see what her future holds.”

Both will now head on to the next level looking to continue showcasing their talent, while also making a difference for their new teams.