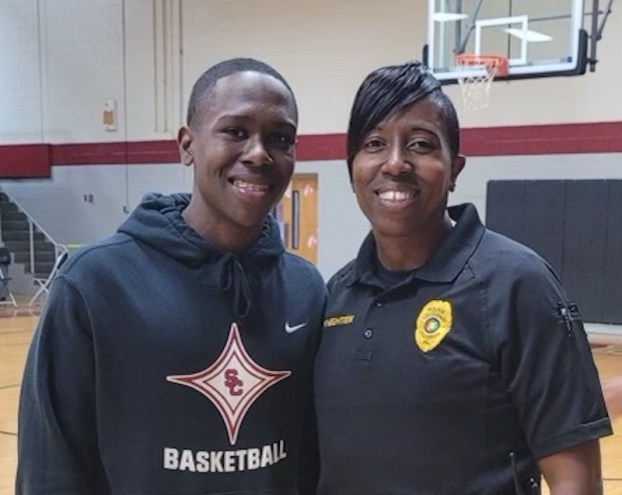 T.J. McGinnis formed a deep love for his help hometown of Columbiana thanks to the example of his family which includes Officer Sasha Lilly Knighten. Having secured $11,000 in scholarship money this year, he will attend Jacksonville State University and then hopes to come back home and work in law enforcement. (Contributed)

T.J. McGinnis is a Shelby County High School senior with lots of heart when it comes to his hometown of Columbiana, and his plans for higher education are some that he hopes to bring full circle to the community that has helped to raise him.

McGinnis, who started his school career at Elvin Hill Elementary and then Columbiana Middle, has always been involved in sports and extracurriculars, and they’ve shaped who he has become in the community. This became most evident last year when in the wake of pandemic shut downs, McGinnis jumped in to volunteer to pass out and deliver lunches to families affected by the crisis.

“Columbiana is like one great big family,” he said. “When there is trouble, everyone leans on each other and that’s what makes it special.”

Under the leadership of  his aunt, Sgt. Sasha Lilly Knighten, McGinnis was able to go to the local elementary and middle school this year to mentor those coming up behind him.

“It was really great to have the chance to give kids a heads up on what to expect in high school and middle school, and encourage the kids to be themselves and not work too hard to be who they aren’t in order to fit in,” McGinnis said.

McGinnis has been a member of the basketball team and even assisted his coach this year when he became injured early in the season. He’s been involved in his church, assisted the Working Wildcats when needed, tutors other students in math, attended the SCHS homecoming court, and managed to do all of it while maintaining a grade point average that has helped him secure nine scholarships so far.

As McGinnis has made plans to go to Jacksonville State University next fall, he’s been working hard every Saturday since August to apply for three scholarships a week. His perseverance has paid off nicely as he’s won scholarships from organizations like Delta Sigma Theta, Lhoist, JSU, and more totaling over $11,000 to aid in his education so far.

When asked what he wanted to do after college, he didn’t hesitate to say he wanted to bring all the knowledge he gains back home to Columbiana and invest it into the community that has invested in him all these years. McGinnis plans to study forensic science and hopes to follow in his aunt’s law enforcement footsteps by becoming a forensic investigator right where he grew up.

His school counselor, Ms. Keahey shared with us, “T.J. is a wonderful, well rounded young man with the ability to light up a room with his positive attitude. He is one of the most responsible, respectful, and trustworthy students I have had the pleasure of knowing.” His mother Kaneesha McGinnis echoed this sentiment when she told us, “He’s a caring kid. He always looks out for his friends and family.”

McGinnis will be one to watch over the next few years, as he rises through his path in education, and comes back to ensure the town he loves raises up another great group of leaders.