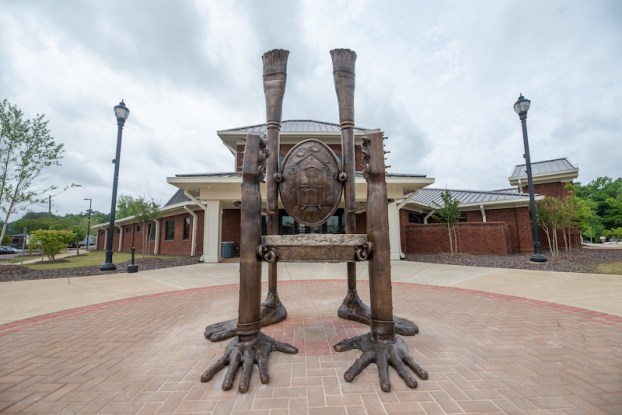 Nelson Grice’s sculpture, The County Seat, is on the grounds of the Old Mill Square in Columbiana, and is waiting for visitors from all over to come sit in it and take a picture. (Reporter photo / Keith McCoy)

Thanks to local artist and teacher Nelson Grice, you can now go to Columbiana and sit in the actual “County Seat” of Shelby County. The newest sculpture to grace the grounds of Old Mill Square uses one of several millstones found on the property during construction as its literal seat. The rest of the sculpture pays homage to the art and music of the area, as well as the original county courthouse on Main Street. The whimsical hands and feet at the base of the sculpture, both figuratively and metaphorically signify stability.

The piece, which has been in the works for a couple of years now, took some time to evolve into the idea of a literal “county seat.” Grice told us that several of his ideas and sketches just weren’t evoking the reactions he was looking for. After literally meditating on it for a while, it hit him that the mill stone he had to work with could be a literal seat and that the sculpture could be an interactive piece that would draw visitors to the hub of the county.

Grice’s County Seat complements another work called “Sustenance,” that was installed on the other side of the park during the quarantine. Created by Ted Metz, Sustenance also uses a millstone and brings attention to the iron works as well as resources of Shelby County like agriculture, business and art.

Both pieces were created in the on-site foundry that is part of the art facility. The Arts Council has always offered classes for a wide variety of arts. They are known for painting, fiber arts, pottery, and other educational offerings.  Now the council is making  plans to include classes on how to forge small knives this summer. The foundry will also be a source of teaching this year, but lessons in that vein will be long term apprentice type lessons. Grice hopes to have that available by July.

A ceremony officially introducing both pieces to the county and honoring the artists was held May 2 in the outdoor amphitheater between both works of art. The turnout of supporters, fellow artists and community enjoyed perfect weather and live music as well as an art exhibit featuring the work of member artists and the art of the Arts Council’s own Pottery Collective members who sold handmade pottery during the event. The gallery exhibits that opened during this event will be open to the public through May 20.

The hope is that the interactive County Seat sculpture will be a draw to the county seat itself.

“If you live in Shelby county all roads lead to Columbiana,” Arts Council Executive Director Bruce Andrews said. “When you do come, we hope you come sit in the County Seat and take a picture.”

To see more of Nelson Grice’s artwork, visit his website at Nelsongriceart.com.