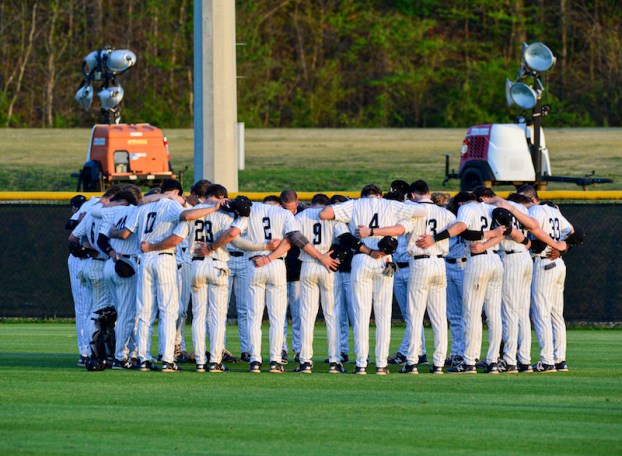 Helena’s baseball team lost a best-of-three series with Cullman in a top-two battle in the second round of the playoffs after a 6-5 loss on Saturday, May 1. (For the Reporter/Jeremy Raines)

FAITH ACADEMY – With tears pouring down their faces, the Helena baseball team and head coach PJ Guy were heartbroken following a 6-5 loss to No. 1 Faith Academy on Saturday, May 1.

In a series featuring the top two teams in Class 6A, both battle to the brink, with the series going the distance and each game decided by two runs or less in what felt like a battle for the state championship.

But through the sorrow of the one-run loss in the rubber match, Guy and the Huskies knew the moment was bigger than the season coming to an end.

“There weren’t a lot of dry eyes,” Guy said. “I don’t think people on the outside looking in really understand the bond and love you have as a team with the coaches and players. Me and my coaching staff, we spend twice as much time with the team as we do with our own families and it’s hard. But at the same time, you develop such a family with your team, a brotherhood and a love, and it’s hard to break.” 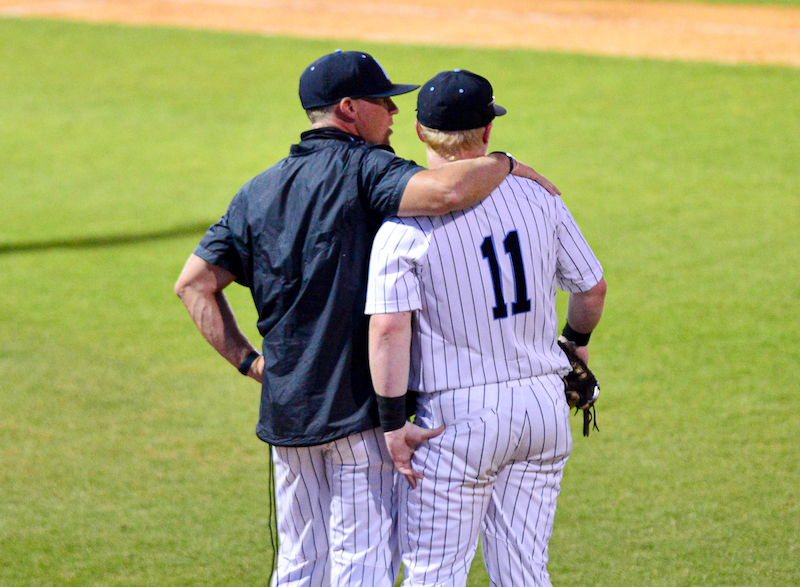 And despite the loss, this year’s team, which had the largest senior class in school history with 13 not only went toe-to-toe with the No. 1 team in the state, but created one of the best memories for one of the state’s top head coaches.

“Personally, I have been very lucky and have coached in a lot of big series. But I think it was probably the best playoff series I’ve ever coached in,” Guy said. “It definitely lived up to the hype of the No. 1 and No. 2 teams playing. Every single pitch was intense.”

With the series featuring the top two teams, the hype was high leading into the series and it came to fruition on the field.

In game two, it was Faith Academy who got the upper hand with one run in the fourth and one in the fifth to take a 2-0 lead.

Helena then loaded the bases in the bottom of the seventh hoping to pull off a comeback victory to end the series, but back-to-back strikeouts ended it to give Faith a 2-0 win and force a decisive game three.

The Huskies got two hits from Ryan Storey in the loss and one each from Landon Leake, Tyler Jon Santos, Griff Minor and Gwin.

That led to the exciting third game with the winner advancing to the quarterfinals and the loser’s season coming to an end.

Helena fell behind 3-0 after three innings and was held scoreless through four innings, bringing their scoreless streak to 11 innings in a row.

But Guy knew his guys were close after several big hits the night before and more during the series finale.

“We had a lot of opportunities but just couldn’t get that one hit early to get us going,” Guy said. “They just showed their maturity. It was kind of one of those feelings in the dugout that we were going to break the ice and have an opportunity to get back in the game.”

That happened in the top of the fifth.

The Huskies got back-to-back singles from Gwin and Moss to lead off the inning with Moss’ driving Gwin home before being thrown out at second.

Landon Leake then doubled to center field before an error and walk allowed McGwire Turner and Santos to reach safely and load the bases.

A fly out then put the Huskies down to their final out of the inning, but a two-out rally ensued. Connor Gibbs walked to drive home one run and bring them within one of tying the game.

He also kept the bases loaded, which set the stage for Storey.

Storey settled in for a battle that eventually saw him earn a 2-2 count before hitting the gap on a fly ball to center field that cleared the bases for a three-RBI double to give Helena a 5-3 lead.

“That was just the definition of this team,” Guy said. “They always fought and showed composure. They competed and competed hard. We were all confident that inning would come because of this group.”

Unfortunately for Helena, Faith Academy answered with back-to-back singles in the home half of the fifth to set the stage for a three-run home run from Cole Berry to push the Rams in front by one—a lead they didn’t relinquish en route to a 6-5 victory. 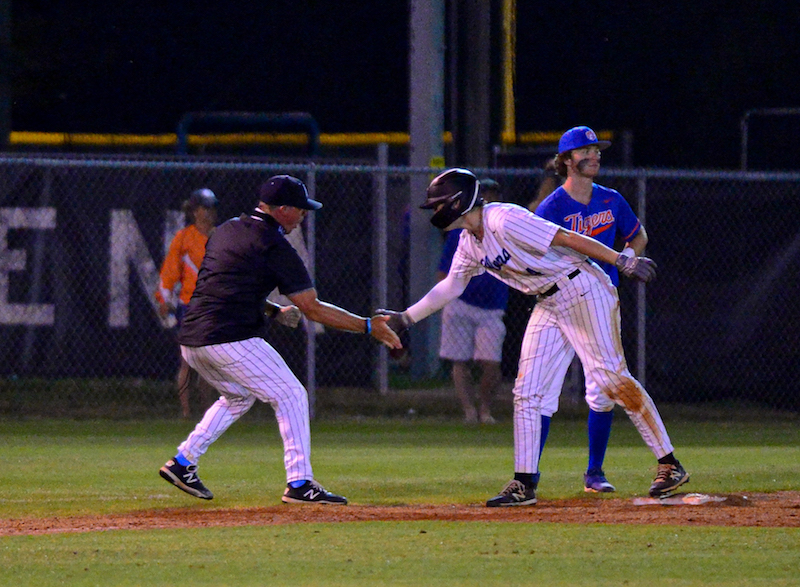 “Sometimes you come up short in life and in baseball. You hope this will help them grow,” Guy said. “They all have bigger things coming up in life, and we just hope the four years with us and even this last weekend with coming up short in a difficult matchup helps them become better men.”

When reflecting on their 26-9 season and the special season, Guy couldn’t help but be overcome with joy at what this team accomplished.

“This team was a very special team for me,” he said. “With it being the biggest senior class and to have the type of year we had, it was disappointing to finish this past weekend, but there is still a lot of joy to experience what we got to experience this year.”

And when he walked up to his team after the loss that ended their season, he shared that same message.

“That’s the hardest conversation to have with your team every year, when it’s over. I just told them how proud I was of them and that I loved them. I was so proud of how they played and presented themselves,” Guy said. “What we do here is help them with their baseball game and as players, but we also want to help them as young men. We want them to become good husbands and fathers, and we praise them for that with a lot of I love you’s and thank you’s. We use the game to glorify God and strengthen them as people moving forward.”

By ALEC ETHEREDGE | Managing Editor GULF SHORES – The outdoor track and field season came to an end on... read more