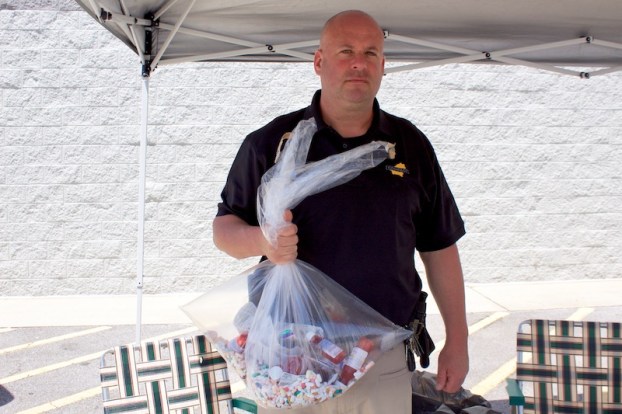 The event occurs bi-annually during the spring and fall, and is coordinated by the Drug Enforcement Administration, in partnership with state and local law enforcement. The program was initiated in 2010 in an effort to raise awareness about prescription and opioid drug addiction, which has steadily increased in the United States over the past decade and which remains an ongoing concern across the country.

According to the National Survey on Drug Use and Health, 20.5 million Americans reported misusing prescription drugs in 2019, a majority of which were obtained from family and friends, often from the home medicine cabinet.

Hammac said that prescription drug misuse has become increasingly prevalent in the United States and specifically Alabama as state medical providers have widened the availability of certain prescription medications, most notably of which includes opioid painkillers. According to Hammac, Alabama currently has the highest rate of opioid prescriptions in the country, which in turn has led to increased addiction as well as drug-related deaths.

“One of the most alarming statistics that continues to remain consistent year after year is the state of Alabama remains number one in the nation for prescription painkillers per capita and so what we want to do is make sure that we are not perpetuating a cycle of addiction by leaving prescription medications unused in medicine cabinets across our communities,” Hammac said. 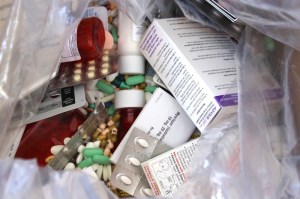 Some of the drugs collected. (Contributed)

The Shelby County Drug Enforcement Task Force has partnered with the DEA to host this event every year for the last decade. This was the first event held since the start of the Covid-19 pandemic, and Hammac said that his department was able to operate five pickup locations throughout Shelby County, which were located in: Greystone, Pelham, Chelsea, Alabaster and Montevallo.

Even with a lack of in-person collections last year, Hammac said that drug misuse has continued to remain a priority for his department throughout the pandemic. Drug overdose deaths reached an all-time high in the U.S. during 2020, according to a health advisory released in December by the U.S. Centers for Disease Control and Prevention.

The CDC reported that 81,230 people died from drug overdoses nationwide between June 1, 2019 and May 30, 2020, the largest number of fatal overdoses ever recorded during a 12-month period. The CDC cited a concerning acceleration of the deaths during the first lockdown, with the largest increase occurring between March and May 2020. Alabama, in particular, had a 20% increase in drug overdose deaths last year.

Hammac said he too has noticed spikes in both prescription and illicit opioid drug use during the pandemic, but said that misuse has been steadily on the rise in Shelby County for the past decade.

“We have seen a consistent rise in prescription pill abuse as well as the abuse of more illicit drugs such as heroin mixed with fentanyl here in Shelby County and that’s not exclusive to small towns,” Hammac said. “That is the same story across the entire nation, and we have seen that consistent increase not just during the pandemic, but has exponentially increased over the last decade.”

Shelby County Coroner Lina Evans said that she has seen a substantial increase in illicit opioid-related deaths since the start of the new year. As doctors have begun restricting access to prescription drugs, Evans said illicit opioid-use has soared.

There have been 25 drug overdose deaths in Shelby County since January, all of them from opioid-illicit drug use. This compares to the 36 deaths that occurred during the entirety of last year from drug overdoses. According to Evans, the CDC’s report points to a larger issue with opioid-related drug use in general, both illicit and prescribed.

“One of the things that surprised me was that the CDC was saying it’s not necessarily just opioids such as a prescription overdose or a prescription opioid like oxycodone hydrocodone,” she said. “They have encompassed everything opioid-related, including illicit drug use, and that’s what we’re seeing here. We’re no different from any other state or any other county in the state of Alabama.”

As doctors have limited prescriptions, Evans said that many with drug addictions have resorted to purchasing concentrated opioids such as fentanyl due to the drug’s cheapness and ability to prolong highs when paired with other illicit drugs. Evans said she also believes the pandemic could have contributed to the sudden switch from prescription-based opioid use to more illicit forms.

“Not being able to go and get prescriptions and go to the doctor, people might have turned to more illicit drug use. It is quick and easy to develop an addiction to prescription drugs, but unfortunately when people are cut off from them like we see now, they go to the illicit drugs,” she said. “It doesn’t matter who makes it or where it comes from once that addiction takes over.”

Another factor which has contributed to fentanyl’s popularity is its ability to be consumed in a variety of forms, most commonly of which is a pounder. However, Evans said that universal factor is what makes the drug so dangerous as small amounts can be deadly.

“We’re talking about just a few grains of that subset so depending on your tolerance, a few grains can be potent and deadly,” she said.

Evans understands all too well the risks associated with drug addiction. Her 26-year-old brother Dane died from a drug overdose in 1998 after being prescribed painkillers for a knee injury. Overtime, Evans said Dane developed a tolerance to the medication, and began requesting larger doses until he finally started buying OxyContin from a friend.

“He knew somebody that had OxyContin and apparently that helped him achieve a bigger high so he started buying that and it ended up killing him,” Evans said.

Since that time, Evans said that she has seen significant reforms in how prescription medications are regulated and distributed, but that prescription and illicit opioid misuse remains a major concern, especially as use among illicit opioids drugs, such as fentanyl, increases.

“It’s unfortunate that we haven’t learned our lesson when we look back over the years. Just like when OxyContin was prescribed, there was a fierce battle across the country, and then it shifted into fentanyl,” she said. “We’re still caught up in that cycle, and now we are just working to try to get this epidemic under control.”

Eight counties can apply for FEMA assistance from March tornadoes

FROM STAFF REPORTS Homeowners and renters who suffered damage from the March 25-26, 2021 severe storms, straight-line winds, and tornadoes... read more