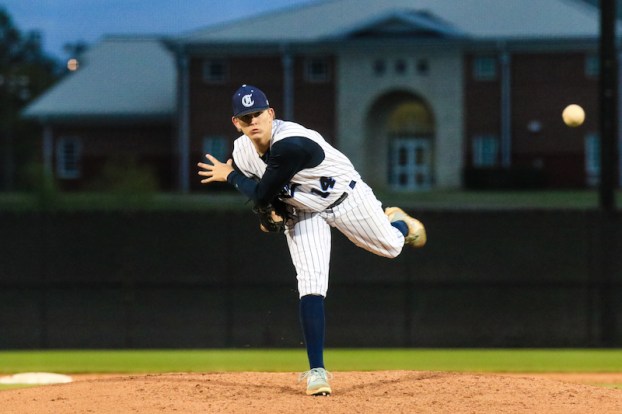 Calera pitcher Matthew Bullard picked up a complete-game win against Chilton County on April 1 behind seven strikeouts. (For the Reporter/Dawn Harrison)

CALERA – The Calera Eagles kept their postseason hopes alive on Thursday, April 1 with a late comeback against Chilton County to split an area series with the Tigers.

Entering the inning, the Eagles hadn’t had a baserunner since the bottom of the first when they scored two runs on an RBI single from Matthew Bullard and a fielder’s choice from Nick Bunn.

After that, Calera had four consecutive 1-2-3 innings.

That changed in the bottom of the sixth, however. Carter Sheehan led off the inning with Calera’s first hit since the opening inning. Despite an out after that, Matthew Windham stepped up with a big hit three batters into the inning when he drove a line drive to left field that brought Sheehan home to tie the game 3-3.

Then, Bullard stepped to the plate and followed that with a ground ball up the middle to drive home Windham for a 4-3 lead.

Chilton County came back to put runners on first and third in the top of the seventh looking to tie the game or take the lead, but Calera was able to get out of a jam when a line out went straight to Riley Gay at first base for the final out of the game.

Bullard, who has been one of the county’s top pitchers this season, got the complete-game win on the mound after the late run support. He allowed three runs on five hits and struck out seven.

Bunn added the only other RBI, while Sheehan and Bentley Berry had the other hits.