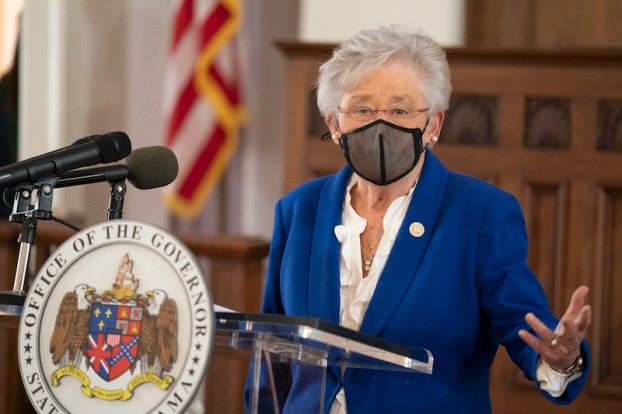 Alabama Gov. Kay Ivey extended the state's safer at home and mask orders until March 5, while she and State Health Officer Scott Harris provided an update on the COVID-19 vaccine. (Contributed/Governor's office)

Gov. Kay Ivey made several important announcements on Thursday, Jan. 21, including an update on the state’s vaccine rollout and the extension of the state’s safer at home order and mask mandate until March 5.

That will mark just eight days prior to the one-year anniversary of the virus’ entrance into Alabama on March 13, 2020.

With the previous order set to expire at 5 p.m. on Friday, Jan. 22, Ivey extended the order to continue to keep residents safe amid a spike in COVID-19 cases after Christmas.

“A great many of us had hoped that when we began the new year, we’d no longer have to incorporate new things like facemasks and social distancing into our daily lives,” she said. “But after the Christmas and New Year’s holidays, COVID-19 numbers and hospitalizations were higher than ever—more than our highest point from last summer.”

“The mask mandate remains the one step we can all take in order to keep some balance in our daily lives and stay healthy and safe,” she said. “Quite frankly, we’ve run out of ways to underscore the importance of taking this virus seriously, and ironically it’s not very complicated. Wear your mask, wash your hands, sanitize the place where you are, and if you are experiencing symptoms, please go get tested and wait until you receive the results before you interact with others.”

The state is also at an important crossroads with the release of the Pfizer and Moderna vaccines, as health care workers, first responders and those 75 and older try to get vaccinated to help us take the next step in defeating the deadly virus.

But the rollout of the vaccine has come at a slower pace across Alabama, which has been one of the worst states at distributing the vaccine to this point.

Ivey and State Health Officer Dr. Scott Harris both urged patience, however, as the vaccine allotment continues to come and go as fast as they can get it.

“I want to also urge patience,” Ivey said. “As everyone knows, the vaccine rollout has begun and Dr. Harris and his team are working around the clock to get shots in arms.”

Ivey personally thanked Harris and the staff, saying they don’t get any public acknowledgement for their hard work.

“Unfortunately, we simply do not have enough vaccine for everyone who wants one.,” she said. “In fact, no state does. However, the team from ADPH is working diligently to distribute our vaccines statewide.”

Harris reiterated the frustrations and concerns, while also urging patience.

“We’ve certainly heard from many people in the public who are angry or frustrated about the vaccine program,” Harris said. “I want you to know, that we hear all of those people who are saying that and share a lot of that frustration as well. It is my responsibility to make sure that you get a vaccine, and I will do that. Our team will make sure you get a vaccine if you want a vaccine in this state. We will do it as quickly as we possibly can.”

Harris said he thinks the state can move the process along faster and that they have several plans they are about to implement that can make that happen.

One of those plans is that the state will be partnering with Walmart to administer vaccinations across the state, while they are also close to reaching an agreement with another “major” drug store to distribute them as well.

Harris said there are currently 502 providers around the state ready to give the vaccine but there isn’t the supply right now.

But the allotment of vaccine doses for the state has been between 50,000 and 60,000 each week and Harris said they have been told that isn’t going to change any time soon.

Harris said the county health departments and other locations who have received their allotment of vaccine doses will be giving out the vaccines as quickly as they can.

At their last update, all were out of vaccines, while the health department will begin administering vaccines each Thursday starting Jan. 28 by appointment only.

The state is currently in Phase 1b of the rollout with those eligible to receive the vaccine being first responders, health care workders and those 75 years old and older.

Latest on COVID-19, including vaccine information

By ALEC ETHEREDGE | Managing Editor  Two months shy of the one-year mark in the battle against COVID-19 in Alabama,... read more