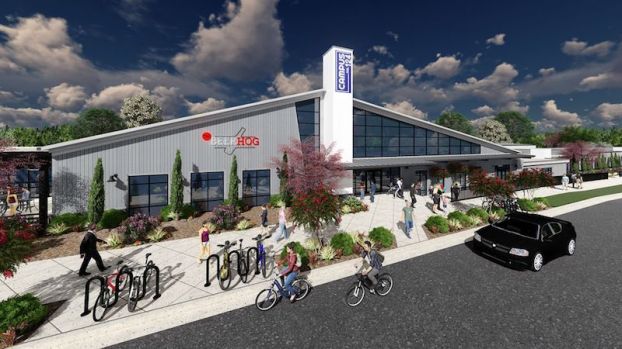 CoreFit has opened in Campus 124 and other businesses, including Beer Hog and a barbershop called The Guys’ Place, are set to open soon. (Contributed)

PELHAM — After several months of updates and construction to turn the former Valley Elementary School building into the new mixed-use Campus No. 124, the first business has opened and two more are planned to open soon.

CoreFit Pelham had the distinction of being the first business to open in the centerpiece of Pelham’s new entertainment district after holding a ribbon cutting ceremony on Jan 7.

“I am so excited about the opportunities that we are bringing to this community,” said CoreFit Owner Atheena Martinez at the ceremony. “We have an opportunity to help people disconnect from their tablets and their phones and reconnect together as a community and to get exercise.”

Schrimsher Property Manager Joyce Skinner added that CoreFit “makes great use of the light and airy space we’ve created for the fitness center.”

The Beer Hog, a Pelham-based craft and local beer stocked bar is among the next set of tenants to open in the development. While no official date for the opening has been announced, Skinner said that it will be opening soon.

Skinner also announced a third tenant coming to the facility, The Guys’ Place. This business is a barbershop specializing in hairstyling and cuts for men and boys.

The Guys’ Place is a franchise with several locations throughout the country, and this particular franchise is owned by longtime Pelham residents who are hiring local hairstylists to fill their chairs.

While no official date has been announced for this business, their website states that they plan to open in January.

“This property is highly unique, and we can’t wait until the Pelham community can experience the Campus. Opening soon will be BeerHog and The Guys’ Place,” Skinner said.

After these three businesses, Schrimsher Properties is actively negotiating with a number of tenants for additional retail, restaurant, entertainment and office space, according to Skinner.

Additionally, Skinner added that despite the pandemic, development has been able to move ahead successfully and safely with a number of improvements to the space.

They are currently focusing on a post-pandemic design that will help assist businesses in the hospitality industries better provide their services in a safe way.

“With the large spaces and six outdoor patios we’ve designed within the Campus, we are able to meet new criteria for the hospitality industry that will provide places to dine and play and keep the public comfortably distanced if need be,” Skinner said.

The developers also recently asked for permission from the city to amend their original agreement to add 14 apartments to the campus.

As development progresses, further announcements about openings and projects will be available for the public on Campus 124’s Facebook page.