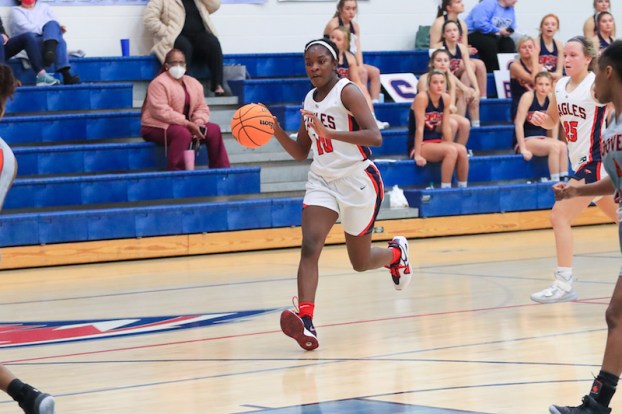 Raegan Whitaker, above, helped Oak Mountain close out a comeback victory against Tuscaloosa County on Friday, Jan. 15. (For the Reporter/Dawn Harrison)

TUSCALOOSA – After taking on the No. 1 team in the state in their area opener, the Oak Mountain Eagles were looking to bounce back from an 80-40 loss when they traveled to Tuscaloosa County High School on Friday, Jan. 15.

That’s exactly what the Eagles did against the Wildcats thanks to an impressive fourth quarter. Against Hoover three days earlier, Oak Mountain gave up 19-plus points in three of four quarters and 10 or more in every quarter of the game.

But the defense came determined in the second area game of the season. After giving up 12 points in the opening quarter against Tuscaloosa County, the Eagles didn’t give up more than six points the rest of the way.

And despite offensive struggles of their own, scoring eight or less in the first three quarters of the game, they bounced back in the final quarter with 13 points to pull off a 35-28 comeback victory.

But early on, the Eagles had similar struggles to their first area game against Hoover.

After Oak Mountain took a 3-2 lead, Tuscaloosa County bounced back with a 10-2 run to storm in front 12-5. The Eagles got a 3-pointer from Victoria Hood at the end of the quarter to bring them closer, but they still trailed by four.

The Wildcats held that four-point advantage up to 17-13, but that’s when Oak Mountain flipped a defensive switch.

The Eagles only allowed one more point the rest of the quarter on a free throw, while Tamia Threat knocked down a 3-pointer to cut the deficit to two points at the halftime break.

That led into a battle on the defensive end of the floor for both teams in the third quarter.

Through the first couple of minutes of the period, Oak Mountain continued a strong stretch and put together a 4-0 run to take a 20-18 advantage.

Tuscaloosa County, however, bounced back from a scoring drought with a quick 6-0 run shortly after to regain the lead at 24-20. Charity Shaw then added two free throws to bring the Eagles to within two at the end of the quarter.

But Oak Mountain drastically needed an improvement on the offensive end going to the final period. The Eagles had given up six points in back-to-back frames, but hadn’t done enough offensively to jump in front.

Raegan Whitaker changed that very quickly in the final quarter.

She scored six of their first eight points in the quarter, as the Eagles started on an 8-0 run to completely shift the momentum.

Now up 30-24, the Eagles continued a strong defensive game and made three free throws in addition to one field goal down the stretch to complete the comeback victory.

After failing to score more than eight points in the first three quarters, Oak Mountain posted 13 in the fourth, while the defense gave up six or less in the final three quarters.

The Eagles improved to 1-1 in area play following the victory.