There will be a vote on Tuesday, Jan. 26, at the Shelby County Exhibition Center to determine whether residents in unincorporated areas of South Shelby County will pay an annual fee to help fund Southeast Shelby Rescue. (Contributed)

Vote to determine if Southeast Shelby Rescue will use public funding

An upcoming vote in South Shelby County concerning the Southeast Shelby Rescue will determine if certain residents are required to pay an annual fee to help support the agency.

Currently, Southeast Shelby Rescue serves those in Columbiana, Montevallo and other surrounding areas in unincorporated portions of South Shelby County.

The vote would establish a boundary area sandwiched between Calera and Chelsea and create the Southeast Shelby Emergency Medical Services District.

Voting will take place on Tuesday, Jan. 26, at the Shelby County Exhibition Center and is only open to voters in the unincorporated district boundaries, as those would be the ones who would pay the annual fees. 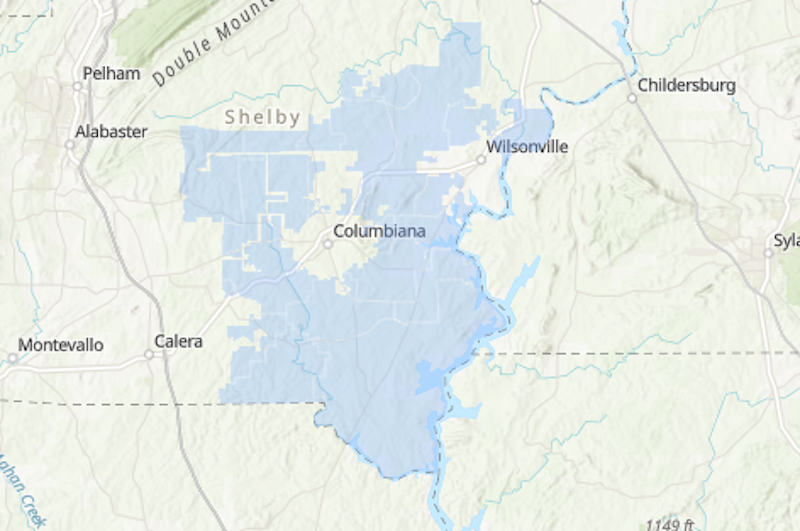 The proposed area that would be in the district and therefore can vote in the election is highlighted in the blue area above.

Each household in the unincorporated zone that would be covered by the new district would pay $80 a year on up to 100 acres to help fund Southeast Shelby EMS. It would be $25 for each additional 100 acres with a cap of $250.

If the property is a vacation home and is unoccupied for less than three months a year, it would be considered to be a vacant property and the fee would reflect the vacant property price. If it is occupied one day longer, it would cost the $80 fee instead of the $50 fee.

Commercial properties would cost 6 cents per square foot with a minimum charge of $80 and no cap.

The annual fee would be due in October with a late fee of $30 if it isn’t paid by the end of the year.

“Right now, we pay paramedics $11.50 an hour and EMTs $8.50. This would allow us to pay them and may help us get stations throughout the area to cut down on response time and improve care,” said Coby Carden of Southeast Shelby Rescue. “It will allow us to retain employees and get career employees if we can offer competitive wages compared to private ambulance services.”

Carden also said the funding would allow them to support two 24-hour emergency trucks rather than one 24-hour truck and one six-day 10-hour truck.

If the fee isn’t paid, there could be a lien placed on the property and there could be the possibility of foreclosure if continued demands for payments aren’t made.

If the vote passes, however, Carden said they’ll be able to have two 24-hour trucks servicing the area seven days a week.

In addition to that, they also have received grants in the past that have helped fund their transport vehicles.

The vote will feature three parts: A vote to form a district, a vote for the fee schedule and a vote on interim board members. Each would have to pass with a majority vote.

If the first part of the vote passes, but the others don’t, a district will form, and it would be two years before a fee schedule or board members could be voted on again.

The proposed interim trustees to be voted on are Chuck Payne, Mike Gannon, Chris Peters, Mike Scroggins and Mindy Nash.

The main unincorporated areas that would be impacted by the vote would be Shelby, Kingdom, Four Mile and Summer Hill.

The ballot will read as follows:

In order to vote in the election, you must be registered and live in the unincorporated areas. If you are unsure if you live in one of the areas, you can contact Southeast Shelby Rescue, and an official list of registered voters will also be made available by the Shelby County Board of Registrars after Jan. 12.

For more information on the vote, you can visit Sesrd.org or contact them.