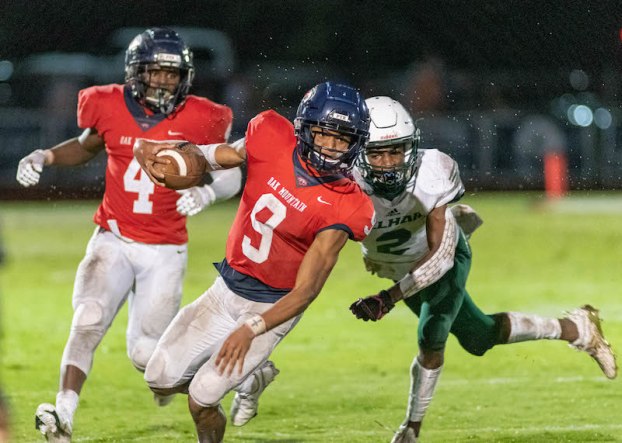 Evan Smith led the county in rushing this year from the quarterback position, earning him a spot on this year's All-County First Team offense. (File)

It was remarkable. Many didn’t think it would happen, some tried to prevent it from happening and nobody knew for sure what would happen. I’m talking about the 2020 high school football season of course, and despite all of the obstacles, this year went on and it was one of the most impressive seasons in recent history for Shelby County teams.

All of that during the middle of a worldwide pandemic.

It was obvious how much more this year meant to so many athletes by the way players performed and what they helped their teams accomplish, and everyone who stepped on the field on Friday night, whether they played or not, deserves tremendous respect.

And those who shined the brightest once out there not only put in the usual work needed to be successful, but did so on their own during an offseason away from coaches and facilities. For that, we honor the top players from 2020 on this year’s All-County team.

Quarterback: Conner Harrell, junior, Thompson. Harrell stormed onto the scene this season as the county’s best quarterback, throwing for 3,405 yards and 40 touchdowns on 220-298 passing with just three interceptions. He also added 315 rushing yards and five touchdowns on the ground.

Running back: Jarrett Crockett, senior, Thompson. Despite missing three games this season due to injury, Crockett still totaled 1,037 yards and 16 touchdowns rushing with an additional 187 yards and two touchdowns receiving. In a pass-heavy offense at times, he was strong on the ground and had the most touchdowns of any running back in the county.

Running back: Dylan Peterson, senior, Pelham. The county’s second leading rusher at the running back position, Peterson totaled 1,305 yards on 144 carries with 15 touchdowns. He was arguably the county’s top performer at the position, especially considering his 9.1 yards per carry.

Offensive line: Seaburn Hines, senior, Helena. Heralded by many as the best offensive lineman in the county, Hines was remarkable once again as a senior and paved the way for a strong rushing attack from Kobe Hughes and Marquis Johnson.

Offensive line: J.T. Pennington, senior, Shelby County. Coaches across the state have raved about Pennington and his ability on the offensive line. He had a surreal 105 pancake blocks, gave up no sacks and played on the defensive line as well. On that side he totaled 11 tackles for loss and three sacks with 13 quarterback hurries.

Offensive line: Connor Howard, senior, Thompson. Howard was big in protecting Harrell at quarterback and paving the way for Crockett at running back, propelling one of the best offenses in the state.

Offensive line: Caleb Newell, junior, Pelham. Newell was the leader on Pelham’s offensive line and helped the Panthers have a 100-yard rusher in seemingly every game this season. He graded out at 84 percent and had 59 pancake blocks this season.

Receiver: Ryan Peppins, junior, Thompson. Peppins was the final player to finish with more than 1,000 yards receiving after totaling 1,037 yards and 12 touchdowns on 63 catches.

Receiver: Jaylen Ward, junior, Spain Park. Ward will be primed for a big senior season after finishing with the fourth most yards in the county this year, totaling 876 yards and five touchdowns on 74 receptions.

Athlete: Evan Smith, quarterback, Oak Mountain. Smith was simply one of the best athletes in the state this season and a strong candidate for player of the year. He totaled 1,719 yards on the ground to lead the county in rushing this season and also had the most rushing touchdowns with 23. He also added 620 yards passing and six touchdowns with one receptions for 44 yards and a touchdown.

Kicker: Drake Tabor, senior, Spain Park. Tabor finished this season 37-42 on extra points and made three of his five field goal attempts with a long of 42 yards.

Defensive line: Brock Sisson, senior, Helena. One of the best at getting in the backfield, Sisson totaled 20 tackles for loss and two sacks with 79 total tackles this season.

Defensive line: Will Sims, senior, Calera. Sims led all defensive linemen in tackles for loss this season with 21, which accounted for the majority of his 59 tackles, while he also added one sack.

Linebacker: Jeremiah Alexander, junior, Thompson. This year’s Player of the Year, Alexander led the county with a dominant 29 tackles for loss and eight sacks this season. He also had three fumble recoveries and 106 total tackles.

Linebacker: Tyler Waugh, senior, Briarwood. Seemingly in on every tackle with 90 solo tackles and 75 assisted tackles, including 7.5 for loss and 1.5 sacks Waugh was one of the most mesmerizing players to watch. He also added three interceptions defensively and played on both sides of the ball, running for 257 yards and 13 touchdowns out of the wildcat offense.

Linebacker: IceBerk Cave, junior, Helena. With 107 total tackles, nine tackles for loss and two sacks, Cave continued his strong play this season and grew into a defensive leader throughout the season.

Linebacker: Jax Van Zandt, junior, Thompson. Alexander may have gotten the attention, but Van Zandt was a leader on the defense and totaled 9.5 tackles for loss and 92 total tackles for the Warriors this season.

Defensive back: Tony Mitchell, sophomore, Thompson. Perhaps the hardest hitting and most exciting defender this year, Mitchell had four interceptions this season and two defensive touchdowns. He also totaled 75 tackles and had eight tackles for loss from the secondary as a player that can cover the entire field.

Defensive back: Jon White, senior, Pelham. White finished this season with four interceptions and totaled six tackles for loss with 45 total tackles as a leader on the Pelham defense.

Defensive back: Zach Taylor, senior, Oak Mountain. Another player to finish with four interceptions, the second most in the county, Taylor also had five pass breakups and totaled 40 tackles with two for loss.

Defensive back: Isaac Montgomery, senior, Shelby County. Montgomery was the county’s leader in interceptions this season with seven, including two returned for touchdowns. In addition to that, he finished with 470 receiving yards on 21 receptions in a run-first, option offense.

Quarterback: Bennett Meredith, junior, Spain Park. Another junior to bust onto the scene this year, Meredith totaled 3,106 yards and 24 touchdowns on 243-371 passing with six interceptions. He also added 111 yards rushing and three touchdowns.

Running back: Judah Tait, senior, Oak Mountain. This year’s leading rusher at the running back position, Tait finished the season with 1,412 yards on the ground and 12 touchdowns behind 262 carries. He finished with an average of 5.5 yards per carry and was a physical, exhausting runner.

Running back: Luke Reebals, junior, Briarwood. Another incredible running back, Reebals finished with 1,149 yards and seven touchdowns on 155 carries, but showed his athleticism with 499 yards receiving and two touchdowns as well as a kickoff return for a touchdown.

Offensive line: Alex Moorer, junior, Briarwood. Playing at guard and center, Moorer was a key leader on the Lions’ line with 19 pancake blocks. He helped propel an impressive rushing attack this year.

Offensive line: Chris Quintana, senior, Pelham. Starting in every game this season, Quintana finished with 24 pancake blocks and graded out at 89 percent as an anchor for the Panthers’ line.

Offensive line: Dylan Campbell, sophomore, Montevallo. Still a young player, Campbell gave up just one sack this season, leading to a dominant season from Joseph Anderson on the ground. He also totaled 34 tackles and 2.5 sacks at the defensive tackle position.

Offensive line: Anthony Butler, senior, Thompson. An offensive tackle, Butler was one of the best linemen in the county this year for what he did to help Thompson have a 3,000-yard passer and 1,000-yard rusher.

Offensive line: Jesus Luna, senior, Pelham. Luna was a leader on the Pelham front with 25 pancake blocks and a grade of 84 percent, helping pave the way for more than 2,000 yards rushing for the Panthers.

Receiver: Kial Cottingham, junior, Montevallo. Cottingham not only finished as one of the county’s best offensive playmakers with 621 yards receiving and five touchdowns on 43 receptions, but he totaled 31 tackles and finished second in the county with six interceptions defensively.

Receiver: Kobe Prentice, junior, Calera. The fifth leading receiver in the county this season, Prentice finished with 711 yards and nine touchdowns on 41 receptions.

Receiver: Brooks Donnelly, senior, Briarwood. Once he got in a rhythm with quarterback Christopher Vizzina, Donnelly became a go-to target for the Lions and finished 537 yards and six touchdowns on 36 receptions this season.

Receiver: Tre Roberson and Sam Reynolds, seniors, Thompson. With almost identical stats, neither of these talented athletes could be left off the team. Roberson finished with 480 yards receiving on 39 receptions with five touchdowns and came in to lead the Warriors at quarterback in the second half of the state championship game. Reynolds finished the season with 465 receiving yards and six touchdowns on 26 receptions, while also adding 291 yards and seven touchdowns on the ground.

Athlete: Joseph Anderson, junior, Montevallo. Totaling 1,156 yards and 16 touchdowns on the ground, Anderson went for more than 200 yards rushing a couple of times this season and added 12 receptions for 109 yards in just eight games this season.

Kicker: Trevor Hardy, junior, Thompson. Perhaps the busiest kicker in the state, Hardy finished the season 74-79 on extra points and finished 4-7 on field goals with a long of 49 and the state-championship-winning kick. He also added an interception and 27 tackles defensively while averaging 39 yards per punt and booting more than 40 touchbacks on kickoffs.

Defensive line: Nate Riddle, junior, Thompson. Riddle was another disrupter in the backfield for Thompson, finishing with eight tackles for loss, two sacks and 89 total tackles.

Defensive line: Gavin Nelson, junior, Oak Mountain. Nelson finished with 40 tackles this season for the Eagles, including 7.5 for loss and five sacks.

Linebacker: Chandler Pruitt, senior, Chelsea. One of the county’s leading tacklers, Pruitt posted 122 tackles this season and was an anchor for Chelsea’s defense.

Linebacker: Triston Woody, senior, Thompson. Perhaps the most improved player in the county, Woody finished with 78 tackles this season, including eight tackles for loss and one interception.

Linebacker: C.J. Richardson, sophomore, Calera. One of the best at getting in the backfield, Richardson totaled 17 tackles for loss, three sacks, one interception and 73 total tackles.

Defensive back: Gavin Shipman, senior, Thompson. Shipman totaled 52 tackles this season with seven for loss. He also added two interceptions, including a pick six, and had a fumble recovery.

Defensive back: Jamal Miles, sophomore, Pelham. One to finish in a tie for third with four interceptions, Miles was big at defending passes this season.

Defensive back: Alastair Harris, senior, Briarwood. Harris played both at linebacker and in the secondary, totaling 79 tackles, 5.5 tackles for loss, one sack and two interceptions.