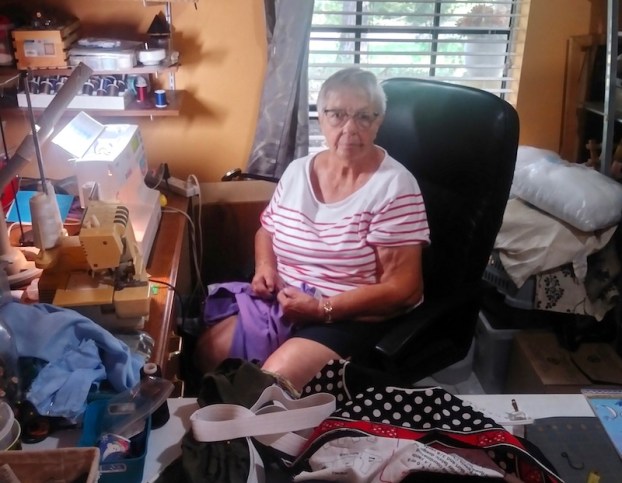 Bernice Fontenberry has volunteered for the Shelby County Jail’s book program, among other things. (Contributed)

Reaching out to those behind bars

A member of the Calera Senior Center, Bernice Fontenberry has volunteered her time and attention to the efforts the Shelby County Jail’s book program that provides books for its inmates to read.

“After receiving a list of books that the inmates wanted, I would go to Columbiana Library to select them,” explained Bernice. “I tried to witness to them about the love of God. My prayer was that the Holy Spirit would touch them and help them to realize that there was a better way of life. I thought often about their families and would pray over them,” she continued.

Bernice is a member of Enon Baptist Church in Montevallo. Since moving into the home of her son Larry, she was no longer able to travel the distance to her previous church home in Calera.

“I visited Enon for several Sundays. I was looking for a church home. This is where God wants me to be,” she said.

She enjoys the services and events the church provides. She is a participant in Yesterday’s Youth, a social event which focuses on seniors and provides a way for members to stay connected, involved and physically active.

“I attended a covered dish event that gave us lunch and dessert, and there are speakers,” Fontenberry said.

Field trips are included in the list of activities; the most recent being a trip to American Village. Although she is mindful of the distance she goes, at 80 years of age Bernice still drives and gets around well. She is a member of the YMCA and enjoys the physical activity the program offers.

The youngest of three children, born and raised in Birmingham, Fontenberry was a stay-at-home mom. Once her children got older, she worked at a one-hour photo processing store.

“I loved it. It was exciting to develop and see the pictures after they were printed. The process was very interesting. We processed a lot of pictures, especially of families vacationing at Walt Disney World Resort. I wanted the customer to always be satisfied,” said Bernice.

She also worked as a customer service rep at a dry cleaner where she first got an opportunity to do alterations. She established Aunt B’s Alterations after retiring in 1980. She was caretaker of her spouse Jack after he developed lung cancer. Married on her parents’ wedding anniversary, the 45-year love affair ended when Jack passed on Bernice’s birthday in 2005. God blessed their union with two sons.

Bernice is the proud grandmother of four and great grandmother of two. Fontenberry spends her days busy at her sewing machine where she works from a spare room in her home.

By NATHAN HOWELL l Special to the Reporter HELENA— Residents of Helena have a new park to bring their families... read more