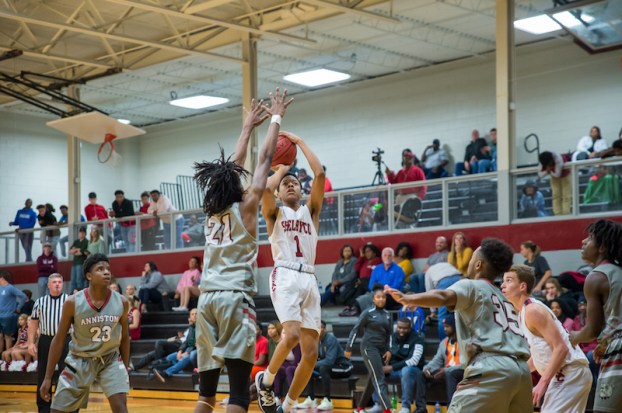 JEMISON – After finishing last season 7-20 overall, the Shelby County Wildcats are off to a solid start to the 2020-2021 season thanks to winning their first two games. But it hasn’t come without some excitement.

After opening the season with a convincing 56-28 win against St. Clair County on Thursday, Nov. 12, the Wildcats came back a night later in their second game and found some magic on Friday, Nov. 13.

Tied with rival Jemison 46-46 with 13.1 seconds left, Isaac Montgomery drove hard into the paint, before stopping on a dime to put up a jumper. The shot bounced off the rim, but waiting was Isaiah Montgomery, who hauled in the rebound and put the ball right back up for a layup just as time expired to give Shelby County a 48-46 victory.

It was a thrilling performance for the Wildcats who embraced in hugs and ran wild around the court in celebration after the thrilling win.

The Wildcats were also able to pull off a special comeback in order to pick up the victory after trailing for the majority of the game.

At the half, Shelby County had struggled to find an offensive rhythm, scoring just 17 points combined between the first two quarters of play.

Jemison, on the other hand, had scored 27 first-half points to take a 10-point lead into the halftime break.

And the struggles continued for the Wildcats into the third quarter on the offensive end of the floor, but luckily the defense picked up the slack.

Shelby County gave up just five points in the third quarter, while the offense scored nine points to cut into the deficit and make it a six-point game going to the final quarter of play.

Now trailing 32-26, the Wildcats came out in the final quarter and finally found some confidence on the offensive end of the floor.

They started to see baskets fall and gained more confidence from each one, which led to 20 points going into that final 13.1 seconds.

Then, with the offensive board and put back from Isaiah Montgomery, the Wildcats scored their 21st and 22nd points to pull off the comeback victory.

Not only did he score the game-winning basket, but Montgomery finished with 10 points as the second-leading scorer for the Wildcats. Jon Michael Gay ended up leading the team with 10 points on the offensive end with several important baskets as well.