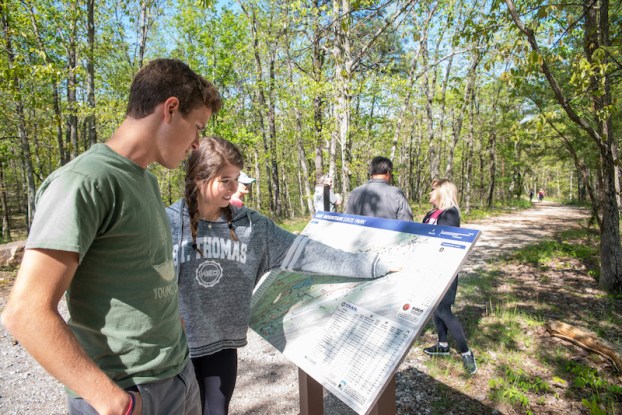 Oak Mountain State Park could soon be adding 1,600 acres of land to its already large park thanks to a recent proposal. (File)

PELHAM — Oak Mountain State Park could soon add more than 1,600 acres to its massive 9,000-plus acre area, if a proposal being considered by Alabama Forever Wild is accepted.

The land is currently owned by EBSCO, a Birmingham-based information services company, who announced earlier this year that they had nominated the Alabama Forever Wild Land Trust to receive the property as an addition to OMSP.

If approved, the spacious plot of land would not only add to the park’s overall acreage, but expand the boundaries of the park toward the Chelsea and Greystone communities.

According to OMSP Superintendent Kelly Ezell, the land would help boost the variety of activity for the ever-increasing demographics of people visiting the park.

“It is in the early stages, we are not there yet, but I do think it is something that would be a real opportunity for the people who use OMSP right now,” Ezell said. “We have a large user group who ride bikes, we have a lot of hikers as well and people who ride horses and all of those could be adapted to this property.”

The area has a dynamic range of features including King’s Chair, which overlooks the entire area known as Belcher Tract, that is often used by hikers and nature enthusiasts alike.

“This will do many positive things for the park and the public in general” she said. “It will protect the absolutely beautiful view-shed from King’s Chair and provide many opportunities for people in the Birmingham-metropolitan area to recreate, especially as our attendance continues to grow.”

The proposal has been heavily favored by environmental groups such as The Nature Conservancy that use their volunteer base and influence to protect nature and wildlife throughout Alabama.

In a statement The Nature Conservancy praised the move by EBSCO in nominating the land explaining in a statement that the addition to the park could bolster the park’s “hiking and biking trail complex and fishing and backcountry camping possibilities.”

As mentioned, the project is still in its infancy, and will take appraisals and other steps by Forever Wild to move toward being purchased. However, once purchased the land would become a part of OMSP and would protect a large tract of land and provide recreation for years to come.

By NATHAN HOWELL | Special to the Reporter HELENA — After pleading guilty to child abuse last December, Cynthia and... read more