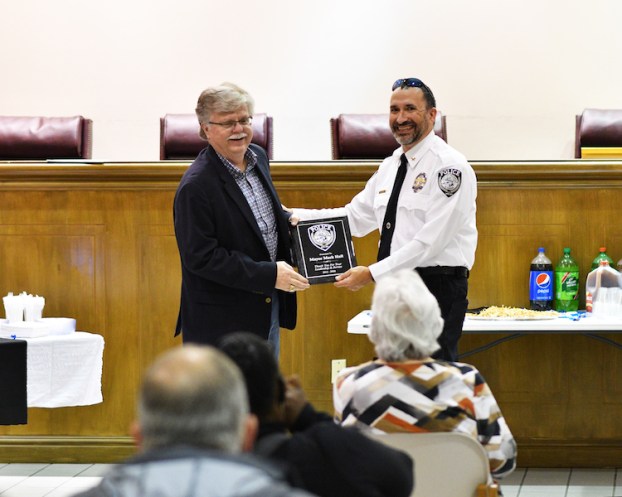 A special retirement ceremony was held for former Helena Police Chief Pete Folmar on Oct. 29 to celebrate his time leading the Helena Police Department. (For the Reporter/Jeremy Raines)

Folmar took the mantle of police chief five years ago, when he was appointed to the position by then Helena Mayor Mark Hall, and had served as a law enforcement officer for more than 26 years.

He announced his decision to retire back in September, as a way to make room for new colleagues to step in and move up, and to spend more time with his family and relaxing. The city and fellow law enforcement agencies wanted to honor his service by holding this special retirement event for him.

Grateful to his colleagues and the community he served over his career, Folmar remarked about how the community was the reason he was so passionate about working as a law enforcement officer.

“We are on a good roll of making progress and being a proactive community-based police department,” Folmar said. “The community here really has a heart for law enforcement and service, and they support us time after time.”

Folmar was honored by his colleagues, including Hall, who thanked him for “being there with him through thick and thin, and putting up with me constantly.”

Folmar was also given certificates and memorabilia to remember his time in his position by Hall, Shelby County Sheriff John Samaniego and others.

The ceremony provided a clear bridge between the work that was accomplished under Folmar and what will come next.

“My hope and prayer is that whoever comes after me does better than I have, and I think that is distinctly possible with the community and administration support here,” Folmar added.