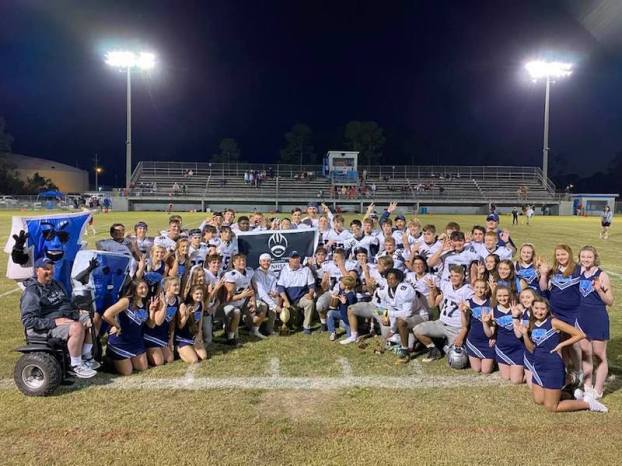 The Evangel Lightning won their third consecutive NHSA National Championship on Monday, Nov. 16, by taking down in-state rival Ezekiel for the title. (Contributed)

PANAMA CITY BEACH, Fla. – Forty-straight points turned into a third-straight national championship on Monday, Nov. 16, for Evangel Christian School. The Lightning crawled out of an early 13-0 hole to shut down the Ezekiel Academy Knights with a 40-13 victory in the NHSA 8-man title game, avenging an Oct. 2 loss to the rival from Montgomery.

Last year’s win marked an overtime thriller that was won in miraculous fashion, but after losing a bulk of talent entering the 2020 season and losing to Ezekiel earlier in the season, the path to winning this year was equally as special if not more so.

“This one is special because they are our rival, and to be able to bounce back and get the kids believing we can win. They beat us pretty good (65-34) back in October,” said ECS Head Coach Tim Smith. “We lost so many kids off last year’s team, a lot of people didn’t give us chances to win. We watched this team grow. It was in the Freedom game that we knew something was different.” 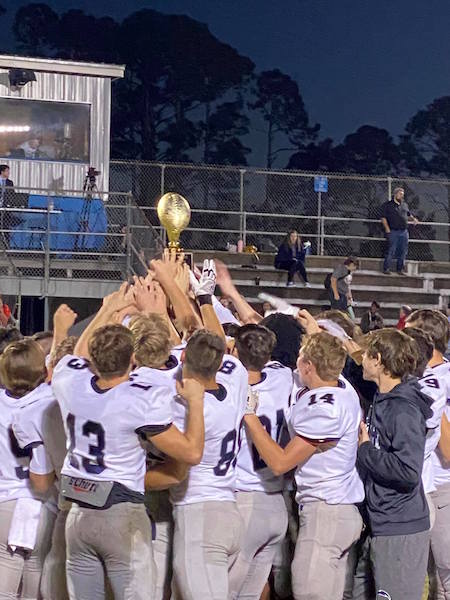 Since the 49-32 win over Freedom, Evangel’s defense allowed a combined 26 points in its final three games of the season, including a 42-13 win over the Tennessee Heat in the tournament semifinals Nov. 14.

“It was the best two games we played this year,” Smith said of his team’s tournament performance.

The game opened the same way the first meeting did this season with an Evangel turnover. ECS fumbled near midfield on the first play of the game, giving the ball to Ezekiel at the Lightning 45. The Knights capitalized with a third-and-goal, 10-yard touchdown pass from Austin Gay to Noble Sefton. The extra point missed wide. It quickly became 13-0 after an ECS punt and 27-yard pass to Brennan Tormey was ruled a catch between his legs in the end zone.

ECS answered by driving inside the Knights’ 10-yard line before penalties pushed Evangel back. Whitfield put the Lightning on the board with an 18-yard pass to Bradley Davis on fourth-and-goal. Lucas Mast hit the extra point to make it a six-point game, 13-7, with four seconds remaining in the first quarter.

“I was so proud of our kids for not giving up when it was 13-0,” Smith said. “We talked about it all weekend. Draw a line in the sand, just step over the line and leave it behind. That was the first thing the kids said they did after it was over.”

Jett Lodge set up the game-tying drive with a 51-yard run to the Ezekiel 42-yard line. Then, Davis tied it with a 27-yard touchdown catch three plays later. The extra point was blocked to even the score, 13-13, with 8:50 to play in the first half. Daniel Viles dropped Gay on a fourth-down sack inside the red zone to get the ball back with 4:40 remaining. After driving down the field, Gay intercepted Whitfield in the end zone to send the game into halftime locked in a tie. 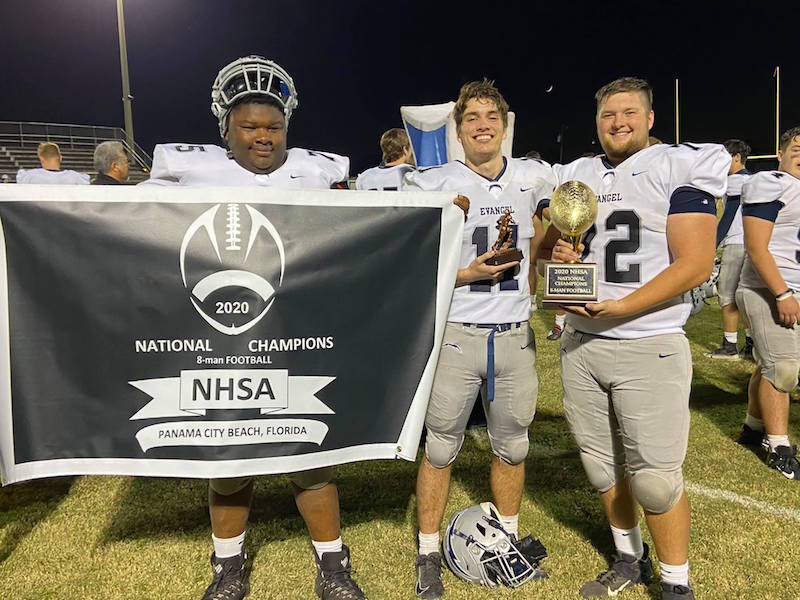 “We made a few adjustments at halftime. They didn’t have an answer for what we were doing defensively. I told them at halftime, if we don’t turn it over, and we tackle them, we’ll beat them,” Smith said.

On Evangel’s first play of the second half, Whitfield stepped up into pressure and hit Davis at midfield for what turned into a 73-yard lead-changing touchdown catch to give the Lightning their first advantage of the game at 19-13. Davis finished the night with 158 yards on six catches.

ECS scored on its next drive, capped by a fourth-and-goal, wildcat touchdown run by Jett Lodge from the 1-yard line with 1:44 to play. The 2-point try failed on both touchdowns.

A Whitfield to Lodge 10-yard touchdown pass and 2-point run by Lodge with 5:49 to play in the fourth quarter helped put the game out of reach, 33-13. The 6-foot-2,senior receiver had seven catches for 112 yards and 54 yards rushing and added eight tackles on defense.

“Jett willed us to win. He was not going to lose tonight,” Smith said.

Viles led the defense with nine tackles, while Everson Jones had eight stops.

Moving Lodge from linebacker to defensive end was one of those adjustments made by Smith at the half. Lodge and Everson Jones each recorded eight tackles, one behind Viles’ team-best nine tackles.

Dylan Weathers put the exclamation point on the win with a 31-yard fumble return for a touchdown with 2:28 to play. Mast tacked on the extra point to make it 40-13.

Whitfield threw for more than 700 yards in the two games over the weekend, completing 14-of-19 passes for 284 yards and four touchdowns in the championship after a 445-yard performance on 13-of-15 passing and five touchdowns in the semifinals on Saturday.

During Saturday’s semifinal win, ECS scored 42 unanswered points after an early 50-yard touchdown pass by the Tennessee Heat. Lodge collected 249 receiving yards on nine catches, including touchdowns of 68 and 21 yards. He also ran one in. Davis had 186 yards on three touchdown receptions of 36, 74 and 76 yards. Mast made all seven PATs in the game.

Defensively, Viles led the Lightning with seven tackles, Davis had four tackles, two interceptions and two pass break ups in the win. Timothy Howard had three stops and an interception.