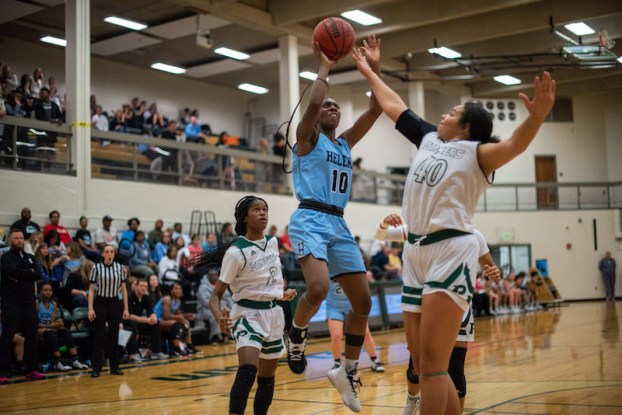 Helena's Montana Harris, above, will be one of five seniors returning to the Huskies this season, as they hope to advance to the state tournament for the second time in school history. (File)

HELENA – Heading into the 2020-2021 basketball season, the Helena girls basketball team may be in the best shape it has been in a while with the return of several key players, including five seniors who have contributed heavily over the years.

Last year, the Huskies finished 12-16 overall but beat area runner-up Pelham and lost to area champion Chelsea by 10 points late in the season, showing they were on the cusp.

Now, Helena is in a new region and with returning talent, the team and head coach Alan Skinner feel like this could be a special season, as the Huskies hope to make it to the state tournament for the first time since 2016 and second time in school history.

“Our goal every year is to win our area and get to a sub-regional because once you get to that point, it’s a new season and you’re back on a level playing field,” Skinner said.

The Huskies will return leaders in Bri Wilson, K.K. Busby, Jess Powell, Kya Gardner and Montana Harris this season for their senior campaigns. Collectively, that group is very comfortable with one another due to how long they have played together.

“The confidence is high,” Wilson said with a strong tone. “We’re seniors and have played with each other for a long time. We’re used to each other. We’re not having to start fresh and that will benefit us.”

Having that tight-knit group of leaders has been important for the Huskies, especially during a year of COVID-19, which has kept the team from being together as much leading up to the season.

“These three have been getting varsity minutes since freshman year. They have been core of our team the last three years and the steadiest portion,” Skinner said. “That experience makes all of our goals attainable.

“We couldn’t start doing anything until July, so the younger ones haven’t had much time, but this group of five seniors knows what’s going on and will set an example.”

Skinner knows how crazy this year has been already and has seen how other sports have been impacted by the pandemic, so he is making sure his entire team is prepared because anybody could be out on a given night.

He said that makes the senior leadership even more important because they are working hard to make sure everyone is prepared to play.

And because of how prepared they are as well as competing in a new region, the Huskies feel good about their goals. They will still have to compete against Pelham and Calera, and they’ll add Chilton County.

But Helena beat Pelham once last year and beat both Calera and Chilton County twice last year, meaning the team feels confident in their ability.

“It is very attainable to win the area championship,” Skinner said. “But it’s not going to be easy. Pelham is a great team. Coach Knowles is a great coach at Calera with athletic kids. Chilton is going to have some improved players. But, if we do the things we know how to do and limit mistakes while playing defense the way we know how to play defense then it’s completely attainable to achieve all of the goals we’ve set.”

Overall, however, the Huskies are just excited to compete, especially the seniors, who know any night on the court could be their final game wearing a Helena jersey.