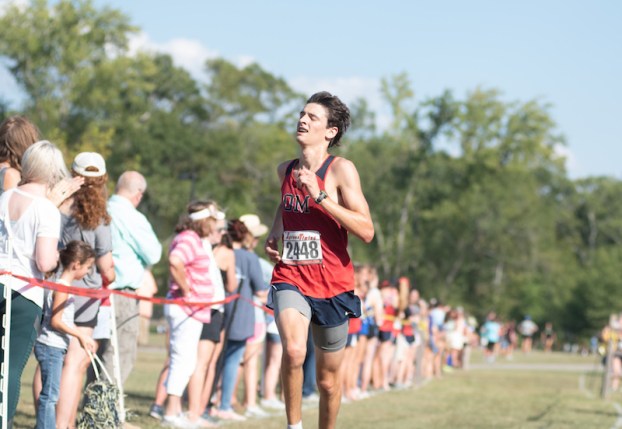 Oak Mountain’s Walker Cole finished second at the sectional meet and paved the way for the Eagles to advance to the state meet as a team, while the girls’ team will also advance. (File)

Oak Mountain boys and girls advance to state, other 7A runners also advance

HOOVER – A strong season for Oak Mountain’s boys and girls cross country teams got a little sweeter on Thursday, Nov. 5, as both qualified for the state meet after finishing inside the top four of the standings during the Class 7A, Section 3 meet at Hoover’s Veterans Park.

The boys, highlighted yet again by Walker Cole, finished third in the event, while the girls were able to finish fourth to cement their spot at state.

But the highest local finisher of both races was Cole, who came in second in a tight finish with Vestavia’s Ethan Strand. Running one of his fastest races of the season, Cole finished three seconds behind strand with a time of 15:59.54, but was 30 seconds clear of third place.

Cole will now head to the state meet as a strong contender to win the state championship.

In addition to him, teammate Hunter Wright helped the Eagles claim one of the top three spots in the team standings after finishing sixth in the race thanks to a speedy time of 16:43.40.

Reese Bell, who has also come on strong this year for Oak Mountain, added another impressive finish as well with his finish of 13th thanks to a time of 17:02.82.

Spain Park was also led by several impressive runners thanks to five finishing inside the top 25, and all five advancing to state.

Garrett Bishop and Webb Harper finished 19th and 20th, respectively, for the Jaguars to add two more top 20 finishers, while Jackson Cooper was just behind in 23rd.

Thompson’s lone state qualifier was Jackson Hamlin, whose track record was more than deserving of a trip to the finals. He finished 15th in the section meet with a time of 17:13.01.

In the girls’ race, Oak Mountain yet again had the high finisher for local teams with Laruen Cole putting together one of her best performances of the season to finish fifth with a time of 20:24.90.

That was big in helping the Eagles finish fourth in the team standings to take their entire team to state.

Behind Cole, Emma Grace Phillips added a top-15 finish for Oak Mountain. She finished the race with a time of 21:11.53 to claim 13th. Behind her, Katie Wright finished 26th, while Lexi Ray and Savannah Michael took 32nd and 33rd, respectively. Madeline Hubbert and Avery Welch also finished also finished inside the top 40, while Meredith Shoemaker and Sydney Heidrich were 41st and 42nd.

Spain Park also had another strong showing in the girls’ race with Mackenzie Culpepper finishing one spot behind Cole in sixth thanks to a time of 20:36.71 to become one of five Jags to advance to the state meet.

Peyton LeCroy added a finish of 20th for the Jags to qualify, while Anna Lidikay, Anna Hoffman and Delaney Vickers all finished inside the top 35 to advance.

For Thompson, Lauren Moon was able to advance to state after finishing 28th behind a time of 22:21.11.

Thompson ranked No. 1 in final poll, Pelham and Briarwood just outside

By ALEC ETHEREDGE | Managing Editor The 2020 high school football regular season has come and gone in the blink... read more