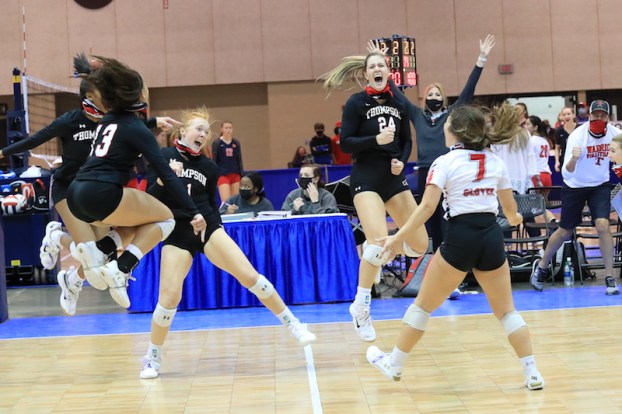 Alabaster and SCR: Thompson’s Kelsey Tangle, No. 24, and Bri Wilson, No. 13, both earned recognition on the AHSVCA All-State volleyball team after special seasons. (For the Reporter/Dawn Harrison)

As another volleyball season ends, Shelby County once again saw a spectacular run with eight teams advancing to the postseason, including runs to the Elite Eight for the Thompson Warriors and Spain Park Jaguars.

And on Monday, Oct. 26, the best players from across the state were honored by coaches on the Alabama High School Volleyball Coaches Association’s All-State team with 16 players making the cut.

Earning spots on the Class 7A First Team were representatives from this year’s two state tournament teams from Shelby County—Spain Park and Thompson.

Emily Breazeale and Audrey Rothman were the two Spain Park players to earn a spot on the first team, while Brianna Wilson and Kelsey Tangle earned a spot for the Warriors.

Brezeale and Rothman have had special seasons and are major reasons the Jaguars advanced to this year’s state tournament as one of the final eight teams. Not only that, but both will be back next year as well with Breazeale a sophomore and Rothman a junior.

Wilson will also be back for Thompson next year as one of the top players in the state, while Tangle, a senior, has played an integral part in the Warriors advancing to the state tournament in two consecutive seasons.

Three more Spain Park players earned a spot on the second team, while two were named as honorable mention, showing just how talented this year’s team was.

Thompson will also be in good shape next year with the return of Caroline Canaday. The junior outside hitter for the Warriors earned a second team nod this year for her performance on the court.

In the 6A classification, Chelsea and Pelham were both well represented with five total players named to the All-State team, including three to the first team.

In addition to those two, Amaya Rudolph earned a spot on the second team to close out a special career for the Hornets.

Pelham’s Tammy Melendez and Elizabeth Hayhurst, both juniors who had spectacular seasons for the Panthers, were honored on the Class 6A Second Team. Melendez handled the duty of libero, while Hayhurst was one of the team’s best players at the net as an outside hitter.