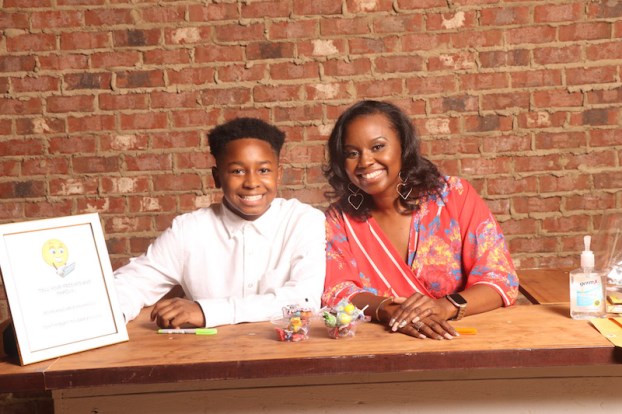 Alabaster residents Hassanah White, right, and her son Jaden Spencer teamed up to write and illustrate a book titled “Did you roll your eyes?” (Contributed)

Alabaster mother and son team up for children’s book

The book, officially titled “Did You Roll Your Eyes?: Obedience and Wisdom God’s Way” is designed to help instill spiritual and practical lessons throughout the stages of growth in a child.

According to White, she has spent many years working with children and realized that much like learning to swim, learning obedience and wisdom will stick better if it’s taught from an early age.

“Who is to say that the training that we received from our parents is the right training to give to our children,” White explained. “The best training comes from the word of God. In order to be the best people that we can, we have to be obedient and wise to what God tells you to do.”

This children’s book follows through the stages of growth from youth to adult. Each section starts off with the title of the book, “Did you roll your eyes?” It then goes on to provide a lesson about that stage and ties it in with scripture.

This book was a collaborative project between White and her son. She said his continued interest in art helped him be able to provide the illustrations to the story that she had crafted.

“He actually won an art competition with Alabaster City Schools when he was in the fourth grade,” she said. “He’s in the eighth grade now, and he’s been drawing for years. I utilized him for all the artwork in the book that brought light to its meaning.”

Since self publishing the book in late August, White said that she had received a lot of positive feedback from parents who have read it with their kids. Her hope is to have the book in churches, daycare facilities and hospitals so that kids can have something to read when they are there.

Overall the book came out of White’s love for her own child, and wanting to show that there is a spiritual path toward teaching obedience and wisdom to children. She has planned a follow up book focusing on hope and love.