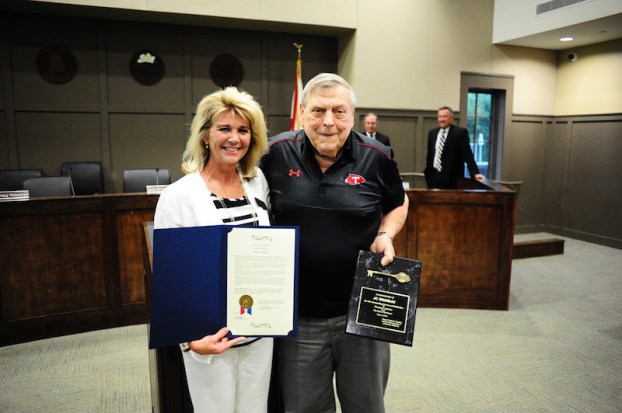 J.C. Whitfield, above, was presented the key to the city back in 2016 after serving the community for more than 50 years working the ticket and pass gate for several different events. (File)

ALABASTER – For the past 50 years, you haven’t been able to enter a Thompson sporting event without bypassing one man.

Perhaps the most recognizable man in Alabaster, J.C. Whitfield’s name is known by kids, parents and grandparents for his contributions to Thompson athletics for generations.

On Thursday, Oct. 15, Whitfield passed away at the age of 74. But as a graduate of Thompson High School, and after spending 52 years serving his alma mater and the city of Alabaster, his legacy lives on.

Through a heart problem and leg amputation, Whitfield spent 52 years of his life taking tickets at several Thompson sporting events no matter the day, the weather or the time.

“It’s amazing how connected you can become to something like this,” Whitfield said back in 2016. “You see a lot of people come and go that you wouldn’t see or get to know otherwise.”

And those people he saw come and go for 50 years remember Whitfield as one of the most dedicated and selfless people they’ve ever met.

At the age of 16, Whitfield’s impact on Thompson athletics began nearly 58 years ago in the 1960s. That’s when Whitfield, along with his brother, started driving the bus for the football program, taking them to and from games.

He carried that job for 11 years in addition to his full-time job of working in Cotton Mills. Then, once the day came to stop driving the bus, Whitfield turned his attention to helping the coaches of the different athletic programs, which led to him at the gates taking up tickets.

It’s something he was doing when Ricky Seale was playing as quarterback for the Warriors back in 1972 and continued to do through eight head football coaches, including Seale’s tenure from 1988 until 2004, for a total of 52 years, impacting several athletic programs.

“I’ve been here for 26 years, and when I first got here, they said ‘Hey Mr. J.C. Whitfield will help you and the program out,’” said Thompson head baseball coach Pat Hamrick. “He loved to be at the gate. He took a load off of the programs at Thompson because of his dedication and desire to do his job correctly. He always got there early, had the tickets out and was ready for the fans.”

Hamrick went on to rely heavily on Whitfield to help the baseball program at the ticket gate. Whitfield was so good at his job that when he missed a season due to a heart condition around 2007, his absence was noticed.

“That was probably my most miserable year,” Hamrick said. “Our parents had to do the gates and it was so much more difficult to coordinate. I never had to worry about it when J.C. was there.”

Hamrick felt his impact from the start, noting that it helped him transition into the role as the new head coach 26 years ago because it took a lot off his plate.

“It didn’t matter who was playing, he was there for every home game. Saturday tournaments would often start at 9 a.m. and he’d get there early and stay through the last start at 7 p.m. He was there the entire day just helping us out. That kind of commitment and desire to help is hard to find, but that was him.”

Hamrick also noted the way he communicated with the athletes, sharing a smile and giving them encouraging remarks, knowing what some of them needed to hear or don’t hear enough.

“J.C. was an extension of our coaching staff,” Hamrick said. “The way he helped the program, the way he interacted with the fans and the players. He was our gate coach.”

During his time sitting at many different gates throughout Thompson’s athletic facilities, Whitfield was there for no other reason than to serve. He wasn’t doing it for the little bit of money he got and he wasn’t doing it for himself, even though he enjoyed every second of it, he did it to serve the community and the coaches he knew needed help.

And when Thompson head football coach Mark Freeman first arrived in Alabaster during the spring of 2015, Whitfield was one of the first to greet him and offer to lend a helping hand.

“I met him at a baseball game,” Freeman said. “He was one of the first to greet me and we quickly got to talking. I knew right away that he loved Thompson High School, and he loved athletics and being around the program. He told me he’d help me out in any way that I needed.”

Freeman decided to put Whitfield at the pass gate so he would come in contact with players, coaches and families as often as possible because of his love for each of them.

“He was a guy that when I got here, his love for Thompson athletics as a whole was obvious,” Freeman said. “The kids, the camaraderie, the events; it gave him something to look forward to and everybody loved him. He helped out a lot of people and was a giver. That’s just who he was. He was a helper and a pleaser.”

And in 2019, Freeman made Whitfield’s trust in him come to fruition with the team’s second state title in school history.

And that’s where the impact of the Whitfield-Thompson relationship was a two-way street.

As much as he loved being around the program, it was the love the coaches, players and parents that gave him the drive every day. He loved to serve others, but the people around him also didn’t realize the impact they had on him.

Even after Whitfield had to have his leg amputated when an illness started to impact his health, the kids kept him going.

On the opening night of the new football season, Freeman had Whitfield come down to the field to see the players and show the true definition of pride and dedication. But that moment had an impact on Whitfield as much as it did the players.

“[Coach Freeman] thought it would give the boys a lift,” Whitfield said at the time, “but those kids gave me an uplift. Right then, I made up my mind that I wasn’t going to give up.”

Whitfield couldn’t be around the program as much as he wanted to be following those moments. His absence was impactful, but his presence remained.

And on the Tuesday before he passed away, he made his way back up to the school, maybe not knowing what was coming, but getting one last moment of solace to the place that was his haven for more than 50 years.

“That moment was a blessing,” Freeman said. “I hadn’t seen him as much the last two years because of his health, but on that day, we were able to sit in the parking lot and talk for a good 15 minutes just catching up. It was really a blessing that the Lord let me have a little time with him before he passed.”

“I guess they trusted me”

Perhaps the most impressive part of Whitfield was the amount of time he stayed determined to help others. Spending more than 50 years around several different sports programs at the school, he became known for generations by the community.

“It’s amazing how connected you can become through something like this,” Whitfield said in a previous interview. “You see a lot of people come and go that you wouldn’t see or get to know otherwise. My wife says it is impossible for us to go anywhere without seeing someone who knows me.”

It never ended during the school year, which put him face to face with athletes from middle through high school for close to six decades.

“When they first get there in eighth grade, they didn’t talk much around him, but by the time they’re seniors, they gained a lot of respect for him,” Hamrick said. “By that time, they know J.C. and the remarkable person he is.

“Dedication, commitment and loyalty. Those things just stand out to everybody and will be his lasting legacy.”

“There is no imagination to what the guy was. He was a server. J.C. to me was a server. A guy that wanted to help in any capacity,” he said. “The Bible talks about serving, and to me, a guy that dedicates his life to something like that for so many years, he was just that pleaser.”

That sentiment was carried by everyone that knew Whitfield in Alabaster.

As for Whitfield himself, he was just grateful.

With all of the memories made and lives impacted, Whitfield had one simple remark in 2016 after receiving the key to the city for his 50-plus years serving the community and the schools: “I guess they trusted me.”