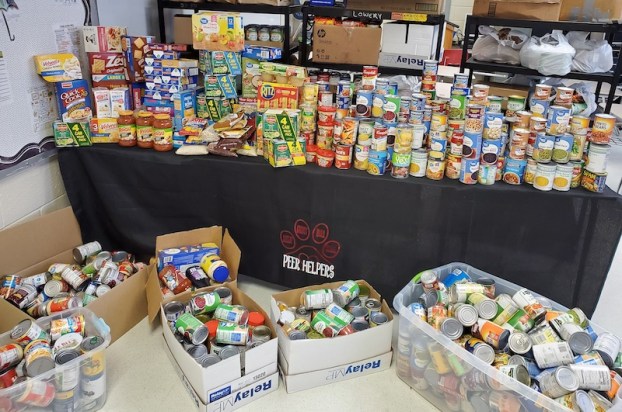 COLUMBIANA — A group of students known as Peer Helpers at Shelby County High School pitched in to help with the Tri-City Impact Food Drive from Oct. 5-8, collecting a total of 1,166 items.

The food will go to families in need in the Columbiana, Shelby and Wilsonville areas, which are the communities served by the Tri-City Impact Team. The school’s drive is part of a bigger drive that is ongoing until Nov. 1.

Peer Helper sponsor Rebecca Hicks at Shelby County High said the project allowed the Peer Helpers to continue to make a positive impact despite the fact that they cannot hold regular meetings due to COVID-19.

“We have the ability to support our school and to lead them in a positive way that can impact our community,” Hicks said. “(The food drive) was a way for us to still support without gathering.”

“Even though we couldn’t get together as a group to do something for the community, I still think we’ve made an impact,” said Peer Helper Denisen Justice, a sophomore at SCHS. “We’ve helped many families in the area. Just knowing that the families won’t have to worry about where their next few meals came from, that’s what makes the whole food drive worth it.”

For more information about the Impact Food Drive, contact Zina Cartwell at 205-728-8454 or zcartwell@centralalabamawellness.org.

By SCOTT MIMS / Staff Writer  A food drive is already underway with the goal of serving at-risk students and... read more