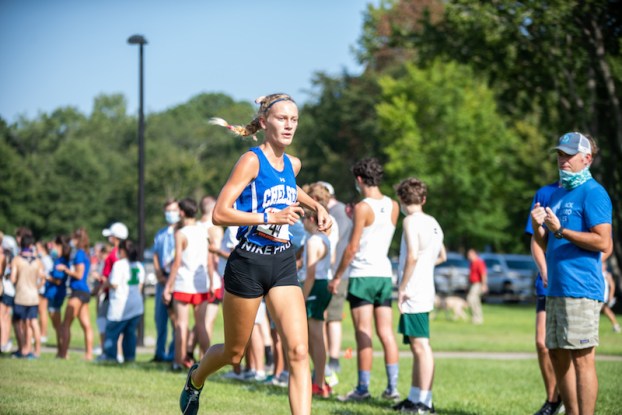 ALABASTER – In an event featuring the best runners from the county, Cady McPhail picked up her first win of the 2020 cross country season when she claimed the top spot at the Shelby County Cross Country Championship at Alabaster’s Veterans Park on Tuesday, Oct. 6.

McPhail was a highlight for Chelsea thanks to her time of 19:57.51, which was the only time less than 20 minutes, as she won by close to one minute.

In addition to her success, the Oak Mountain Eagles also had a strong showing at the event as well and finished first in the event as a team thanks in large part to Lauren Cole finishing second in the individual standings with a time of 20:42.

Chelsea also fared well with another top-10 finisher thanks to Avery Thompson finishing fifth with a time of 21:52.40. That was big in helping the Hornets finish second in the overall team standings behind Oak Mountain.

Thompson’s Emily Allen claimed third in the race behind a time of 21:07.04, while teammate Lauren Moon added a finish of ninth for another top-10 finisher thanks to her time of 22:03.03.

Chelsea’s other top finishers included top 20 finishes from Clair Neuberger and Jos O’Kelley. Neuberger took home a finish of 16th behind a time of 23:23.96, while O’Kelley finished 19th thanks to a time of 24:10.22.

Indian Springs also had an impressive showing from Elise Picard, who claimed 11th in the individual standings thanks to her time of 22:25.58.

In addition to that, the Shelby County Wildcats saw one runner finish in the top 30 with Mary Moore finishing the race with a time of 25:17.33 to take home a finish of 29th.

By SETH HAGAN | Special to the Reporter GADSDEN – The Thompson Warriors posted their second shutout of the year... read more