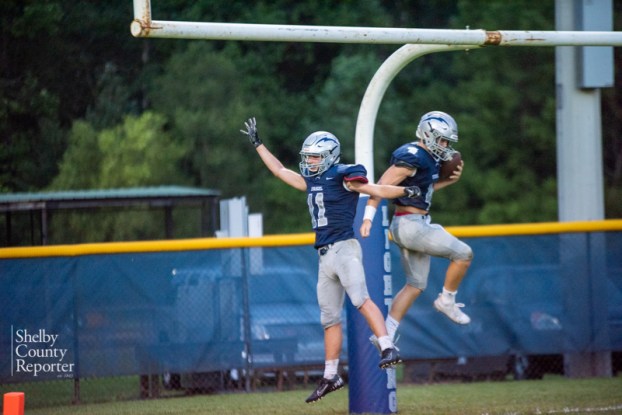 The Evangel Lightning improved to 5-0 this season behind 500-plus yards of offense against Lighthouse in their most tense game of the season thus far. (File)

ECS Moves to 5-0 with ACSC win at Lighthouse

Eli Whitfield threw for 234 yards on 8-of-18 passing, and the Lightning added 263 yards on the ground from the I-formation.

“It was a big one being on the road. They’re really a good football team,” said ECS Head Coach Tim Smith. “I thought the difference in the ball game was our big guys up front. Our offensive line played really, really well. It was a good win for us and gets us ready for next week against Ezekiel Academy.”

After a scoreless first quarter, Whitfield put the Lightning on the board with a 69-yard touchdown pass to Bradley Davis, followed by touchdown runs of 1 and 7 yards from Daniel Viles to help ECS carry a 21-14 lead into the half.

In the third quarter, the Lightning pulled away with 21 points. To open the second half, Davis hauled in a 34-yard touchdown pass for his second score of the night. He finished the night with five receptions for 136 yards. Zach Chandler later made it a two-touchdown lead with a 30-yard pick-six on defense. Whitfield then connected with Jett Lodge for a 57-yard touchdown pass.

Lodge, who rushed for 126 yards on seven carries, added a 52-yard touchdown run early in the fourth quarter. He also had 98 yards receiving behind three catches. Viles also hit the century mark on the ground, collecting 115 yards on 16 carries.

“We talked about it all week. I told them before the ball game that it’s going to be one of the gams that you go four quarters, and to be honest we haven’t had to do that all year. We pulled away, but we let them back in it late,” Smith said.

After taking a four-touchdown lead, Lighthouse capitalized with a defensive score in the fourth quarter, returning an ECS fumble for a touchdown. The Lighthouse Warriors then held ECS on downs and answered with a short touchdown run to cap the game.

Defensively, Davis led ECS with 11 tackles, including two for a loss. Timothy Howard followed with seven stops, one sack and an interception.

ECS (5-0) will host another Ezekiel Academy (Montgomery) on Oct. 2 to conclude its ACSC regular season schedule. A win can clinch home field for the ASCS Championship.