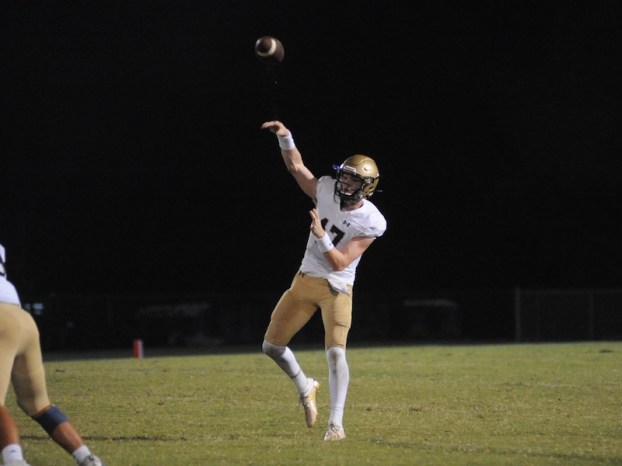 Briarwood came up short in an exhibition game against James Clemens on Friday, Sept. 25, after the Jets forced several interceptions. (File)

By CHRIS REIN | Special to the Reporter

The game was a “marriage of convenience” for both teams, who officially earned victories earlier in the week when their originally scheduled opponents forfeited due to COVID-19 outbreaks. The quickly rescheduled matchup allowed the Jets to host their homecoming game.

After a dissapointing opening quarter, the Lions demonstrated resilience and outscored the Jets the rest of the way.

“Things didn’t go our way early, but I’m proud of how our team battled back to get in the game and make it a game,” Briarwood head coach Matthew Forester said.

James Clemens built a 27-0 lead before the end of the first quarter, with the offense and defense each scoring a pair of touchdowns. After a Lions’ punt, Jets’ quarterback Gio Lopez hit Manny Sanders on a 29-yard pass to put the Jets up 7-0.

James Clemens then returned interceptions for touchdowns on the next two Briarwood possessions, with only a missed PAT to mar the perfect start. After forcing another Briarwood punt, Lopez’s 41-yard touchdown run gave the Jets a comfortable lead.

James Clemens’ Connor Cantrell hit Manny Sanders from 15 yards out for the receiver’s second score of the night to push the lead to 34-0, but Briarwood fought back and got into the game with two quick scores. After a 4-yard run by Tyler Waugh and a defensive stand, Lions’ quarterback Christopher Vizzina hit Brooks Donnelly on a short touchdown pass, and Luke Hand’s PAT made it a more respectable 34-14 at the half.

After forcing a punt to open the second half, Luke Reebals touchdown run capped off a 99-yard drive to trim the lead to 34-21, but Vizzina’s third interception of the night gave the Jets a short field, and Lopez ran the ball in from 20 yards out to make it 41-21. Briarwood put together another long drive to answer, but a fourth interception by the Jets snuffed out the threat.

After trading punts, Briarwood again drove deep into the Jets’ territory once again but could not score before time expired.

Briarwood returns to region play next week with a trip to Shades Valley, while James Clemens was scheduled to travel to Florence, but the Falcons forfeited the game earlier on Friday after several of their players tested positive.

By GRAHAM BROOKS | Special to the Reporter ALABASTER – In a battle between No. 1 teams, Thompson flexed its... read more