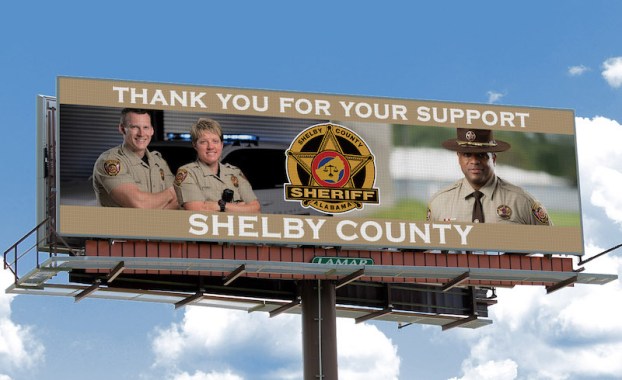 Billboards like this have been placed throughout Shelby County thanking members of the public for their support of the Shelby County Sheriff’s Department. (Contributed)

COLUMBIANA — Billboards in seven different locations across Shelby County express gratitude to the public for their recent support of the Shelby County Sheriff’s Office.

The billboards — four of which are traditional billboards and the remaining three part of rotating digital displays — offer a simple message of appreciation. They will remain in place for a four-week period.

“We are humbled to have received all the great support from our citizens,” said Capt. Jay Fondren. “In the last few months, a whole host of people have brought PPE (personal protective equipment), bottled water, snacks, fruit, letters of encouragement and prayers, and other donations just to show their support.”

Fondren said that while members of the department try to vocally express thanks, the consensus seemed to be that the billboards would be a simple, straightforward way of getting the word out. He said the idea came from a sheriff’s deputy.

Several local residents have commented on the billboards as they have become familiar to passersby in the last few days.

“We work hard to make sure that the needs of all citizens are met on a daily basis, and as a result we have received an outpouring of support during these unique times,” Fondren said. “We weren’t looking for any feedback or accolades. We wanted the message to be one-way. We see your support, we see it every day and we appreciate it.”