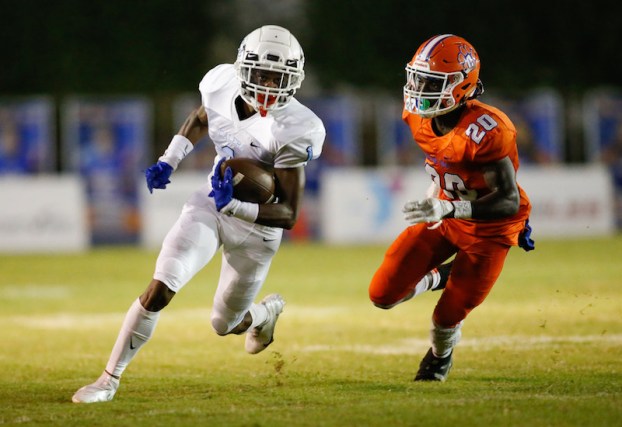 Kobe Prentice turns upfield to beat the Chilton County defender in Calera's 24-21 win against the Tigers on Friday night. (For the Reporter/Brandon Sumrall)

By BRANDON SUMRALL | Special to the Reporter

CLANTON – The Calera Eagles had won just one region game in the 6A classification during the last three seasons entering Friday night, Sept. 11, but that changed when Eagles went on the road and took down the Chilton County Tigers 24-21 to improve to 2-2 overall and 1-1 in region play.

The home standing Tigers took possession to start the contest at their own 32- yard line, and thanks to a pair of big runs from Kevin Staffney and Jakobe Worthy, they marched quickly into the Calera red zone. With a first-and-3 from the Eagles 4-yard line, Worthy found pay dirt to put the Tigers on the board early 7-0.

The Chilton defense came prepared to play as well and didn’t allow a single Calera first down on the Eagles’ opening drive as a fourth-and-10 punt from their own 44-yard line gave it back to the Tigers.

After a stretch of strong defensive play, Eagles found their first points of the night in the second quarter thanks to a 1-yard touchdown by Tyler Nelson. With the PAT no good, the Eagles went into the half trailing 14-6.

The halftime break did little to cool the Eagles’ offense off as just three plays in to the third, Nelson broke loose from his own 42-yard line before being dragged down at Chilton County’s 2-yard line. Two plays later, Nelson connected with Noah Williams for a 2-yard touchdown reception. With 9:59 remaining in the third, the Tigers held a 14-12 advantage.

The Eagles looked poised to take the lead with 3:53 remaining in the third, but a Chilton defensive stand at its own 1-yard line turned the ball over to the Tigers at their own one.

A quick three-and-out appeared to be destine for the Tiger offense when on a third-and-8 at their own 3-yard line, Kevin Staffney bounced off the right side to go 95 yards down to the Calera 3-yard line. One play later, and Worthy put Chilton County up by nine at 21-12.

The Tigers’ lead, however, was short lived as Art Amos received the ensuing kickoff at his own 14-yard line and returned it all the way down to the Chilton County 7-yard line. Two plays later, Nelson found the end zone to make it a 21-19 at the end of the third quarter.

A quick three-and-out by the Tigers in the fourth handed possession back to the Eagles with 10:44 remaining where Nelson and company went to work at the Chilton 44-yard line.

A pair of big runs by Kobe Prentice and Williams moved the Eagles down inside the Tigers’ red zone. The Chilton defense stood tall and forced the Eagles into a fourth-and-six at the 6-yard line where a 23-yard yard Calera field goal attempt in the driving rain would sail through the uprights to give the Eagles a 22-21 lead with 7:56 to play.

With heavy rains and lightning setting in on Tiger Stadium, the teams were sent to the locker room with 3:37 remaining and the Eagles holding a 22-21 lead.

With play resuming after the weather delay, a Chilton defensive stand handed the ball over to the Tigers at their own 2-yard line.

But on second-and-11, quarterback Smith was brought down in the end zone for a safety, leading to the final score of 24-21.

Nelson led the Eagles both through the air and on the ground with 165 yards passing on 13 completions of 23 attempts with a touchdown while adding 93 more yards on the ground with a pair of scores. Williams added 76 yards and a touchdown on six receptions, while Kevin Holman and Fred Hurth led the defense with eight and seven tackles, respectively. Hurth also forced the late safety.

Pelham downs Stanhope to improve to 3-1

By CHRIS REIN | Special to the Reporter PELHAM – It’s rare for a team to have its home opener,... read more