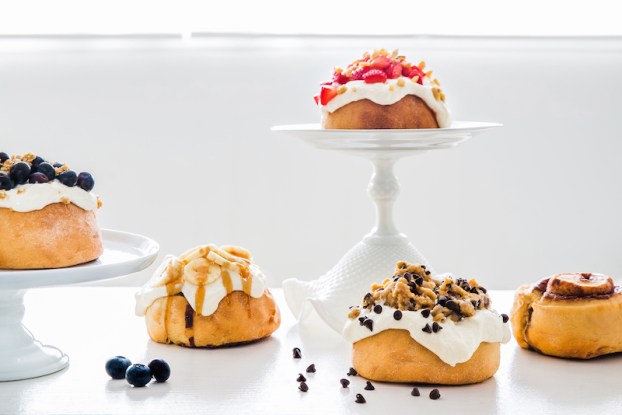 Cinnaholic customers can customize their cinnamon rolls with more than 20 flavors of frosting and a variety of toppings, or they can select one of the bakery’s bestselling combinations, pictured. (Contributed/Cinnaholic)

HOOVER – A bakery set to open on the U.S. 280 corridor next month is taking the classic cinnamon roll to new heights, one topping at a time.

The first Alabama location of Cinnaholic will bring the Atlanta-based bakery’s gourmet cinnamon rolls, sweet treats and coffee drinks to the space next to Moe’s Southwest Grill in the Lee Branch Shopping Center.

Although a grand opening date has not been announced yet, Cinnaholic Hoover franchise owner John Rumore expects to welcome customers in August.

“We’re really, really close,” Rumore said. “People are excited about us coming. Once they come in and taste the product, they’ll be sold.”

Founded in 2010 by Shannon and Florian Radke, Cinnaholic offers 100-percent vegan products that are dairy- and lactose-free, egg-free and cholesterol-free.

“Shannon worked very hard at coming up with this recipe,” Rumore said. “She spent over a year with the recipe to perfect it and get it just right. It’s a really delicious product.”

Rumore said the absence of ingredients such as dairy and eggs makes Cinnaholic’s cinnamon rolls and treats safe options for people with certain food allergies.

The couple’s creations also caught viewers’ attention when they appeared on the popular ABC television show Shark Tank in 2014.

After their screen time, the Radkes started to expand the brand across the U.S. and Canada.

Everything Cinnaholic sells is made from scratch, from the cinnamon rolls to the brownies, Rumore said.

Customers can build their own cinnamon rolls from more than 20 frosting flavors and various fresh toppings, or they can choose from Cinnaholic’s bestsellers, which include Blueberry Pie, Strawberries and Cream, Cookie Monster and the classic Old Skool Roll.

In addition to the cinnamon rolls, Cinnaholic offers Baby Buns, or bite-size versions of the rolls that are served plain or frosted with one topping; fudgy brownies; chewy chocolate chip cookies; edible chocolate chip cookie dough; and Cinnacakes, which come in small, medium and large sizes.

According to Rumore, the Cinnacakes and Baby Buns are popular catering menu items for private events.

Regarding the bakery’s location, Rumore said the space in Lee Branch plants Cinnaholic in a prime area for residents who might be on the hunt for dessert after dinner.

“Most Cinnaholics really thrive around other restaurants,” Rumore said. “We really liked the restaurants in the area. (Cinnaholic) is somewhere you’d like to go after you have a good meal at night.”

There are nearly 40 Cinnaholic locations around the country, and a second location in Alabama is in the works, Rumore said.

By ROBYN JAMES | Special to the Reporter NORTH SHELBY – When we go out on a wing and a prayer,... read more