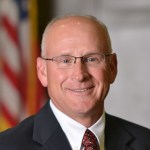 “I want to sincerely thank the citizens of Ward 4 for allowing me to serve as their council member for the past four years,” Farrell said. “I am honored and humbled to have been given the opportunity to serve our residents and the city of Alabaster.”

One of Farrell’s top priorities is the safety and well-being of Alabaster residents.

“My goal is to ensure that public safety continues to receive the needed support and funding in order for them to provide the best services to the community,” said Farrell. “With ongoing capital projects in public safety, I would like the opportunity to see these projects completed during the next term. Additionally, with the potential growth that is anticipated over the next four years and beyond, I want to ensure our city is prepared and can provide the services needed to efficiently accommodate that growth.”

Having retired from the Alabaster Fire Department in 2011 after 30 years of service, Farrell said he feels that knowledge and experience will continue to give him the tools to serve the citizens going forward.

Farrell and his wife Sheri have been married for 38 years, and they have one daughter and two grandchildren.

FROM STAFF REPORTS PELHAM – At a board meeting on Monday night, June 29, the Pelham Board of Education announced the... read more