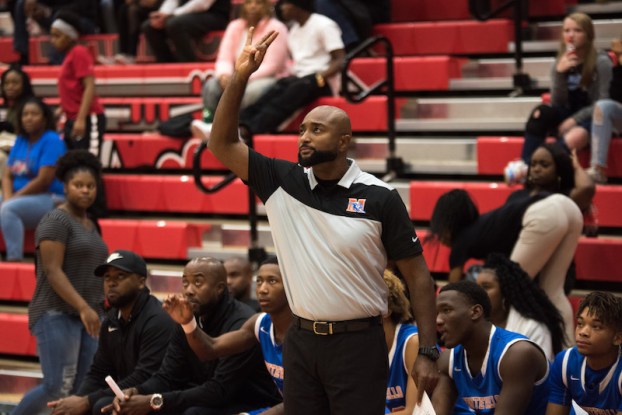 Pelham has announced that former Montevallo head coach Greg Dickinson will take over the same position for the Panthers. (Reporter photo/Keith McCoy)

PELHAM – After a successful seven-year stint at Montevallo that saw him pick up more than 100 wins and advancing to the Sweet 16 two years ago and the Elite Eight this past year, Greg Dickinson has now been hired by Pelham to take over the Panther’s vacant head coaching job.

The move was made official at special called Pelham Board of Education meeting on Thursday morning, June 4.

Dickinson will take over for former coach Joel Floyd, who left two weeks ago to take over an assistant job at Spain Park High School.

“Leaving Montevallo, that’s very hard for me. My heart is still there,” Dickinson said. “Yesterday was very hard talking to those kids and telling them about this transition, but this is the right fit and I’m excited to get started.”

This past season, the Bulldogs, led by sophomore Michael Jones, as well as bigs Jamarius Carter and JaBrian Sullens, won 18 games in a row at one point to earn a spot in the Elite Eight before falling just one game short of the Class 4A Final Four.

It’s been impressive to watch after the program started with 10 kids his first season, but then built up to 70 his second season and continued to get better and better each year.

Dickinson said he wants to make basketball fun for Pelham athletes. He wants to let them have free play in the gym when things aren’t quite as serious, but then when the season gets here and it’s time to prepare, that they know it’s time to get down to business.

“When you have an open gym and allow them to be free, it helps create excitement and build a program,” he said. “There’s no coaching or yelling at them. You just laugh and joke with them when they make mistakes. They see that the coach is a pretty cool guy and that will eventually bring them in.

“They see a coach that cares and can actually get out there and play with them and joke around. They see that during the offseason we can have some fun and enjoy playing the sport, that’s going to help more people want to play.”

For Kiel as the athletic director, that ability to want to build the program and make it fun was what helped her land on hiring Dickinson.

“I think that he’s going to continue the tradition that we have at Pelham,” Kiel said. “We’ve got really good numbers in our program and I think we have the opportunity to make some noise. I think with his skillset, the way he develops players, I think he can mentor them and get them to play hard. I think Pelham has a really bright future.”

At Montevallo, he was also known for working with the athletes from the time they reached kindergarten all the way up to the high school level, which is something he wants to carry to Pelham and excites Kiel.

“Working with our park and rec program and our youth league basketball all the way into the middle school, the verticality of our athletic department is so important, and I know coach has the experience doing that,” Kiel said. “His vision is to get very involved with the elementary schools and the middle school to connect them all with the high school. He wants to be a part of Pelham basketball and setting the expectation at a very young age.”

That’s also what made it hard for Dickinson to leave Montevallo, having to look some of the guys in their eyes after coaching them for so long and telling them that he was leaving.

“That group that’s there now is the kids I started my camps with, my training with, when they were kindergarteners and first graders. Now they’re a very special group. When you build a relationship with a kid from the time he’s in kindergarten and first grade, and every year you’re with him and training him in the offseason, then they get to high school and they’re expecting to be with you 24-7 and then you give them this news, it’s kind of heartbreaking. That’s what made it so hard.”

Dickinson said that helped build Montevallo into championship-contending program that it has become, however, because schools that are very successful start in the youth programs and not in the high school.

“Once you build those relationships at an early age to get them excited about coming to your camps, I think that’s the biggest part here that I plan on doing,” he said.

Dickinson has worked around the Birmingham-metro area training kids and building those relationships and will carry a coaching method over from Montevallo of making sure his Pelham players get to compete with more free play against kids from other schools.

“I like to bring kids from different schools to come in and join to see a different work ethic,” Dickinson said. “When you’re around the same kids all the time, you get used to the same work ethic, but then if you bring somebody else in that’s at another level, it takes our kids to another level.”

He said that helped Montevallo tremendously because the work ethic wasn’t quite there early on until they saw what others were doing to be better.

Dickinson knows the challenge that lies ahead and said being competitive will rely on him making sure the top athletes are playing and that his players believe they can go all the way.

He also said the doubt that he can succeed in winning a championship at Pelham is what fuels him and he can’t wait prove them wrong.

“I’m so excited about the challenge,” he said. “I love that I’ve heard I’m not going to be a winner here because 6A is so challenging. I love all that negative talk and the challenge. That’s what excites me about leading this program is proving we can do it.”

By NATHAN HOWELL | Special to the Reporter HELENA – Helena Hollow is set to hold a 21 and up... read more