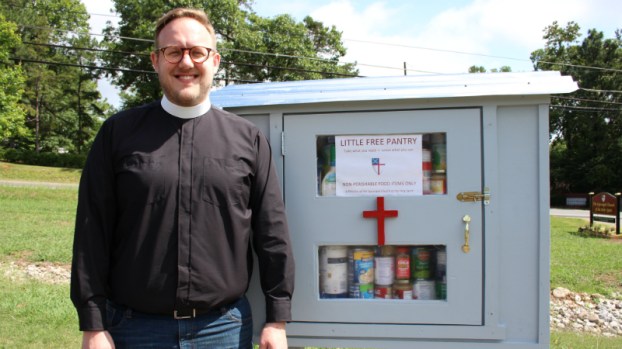 The Rev. Eric Mancil stands beside the new Little Free Pantry at The Episcopal Church of the Holy Spirit in Alabaster. (REPORTER PHOTO/STEPHEN DAWKINS)

ALABASTER – The Episcopal Church of the Holy Spirit has instituted a new effort to help those in need in the community.

A “Little Free Pantry” has been built at the church that offers residents an opportunity to pick up free food donated by others.

The Rev. Eric Mancil, rector of The Episcopal Church of the Holy Spirit, said the church’s outreach committee several months ago discussed new ways to reach the community.

“One of the ideas that they came up with was this idea of a Little Free Pantry, which is something that is becoming popular across the nation,” Mancil said.

Anyone who wishes to donate food can place non-perishables in the Little Free Pantry, and anyone who needs food can take what they need, free of charge and with no strings attached.

The pantry’s slogan is: “Take what you need; leave what you can.”

As the COVID-19 pandemic took hold in the area, church leaders thought it was urgent to get the pantry operational.

“We feel like this is an important time to do it because a lot of people are out of work; they might be food insecure,” Mancil said.

The pantry was painted to match the church building with a door with a latch so that it doesn’t swing open.

Once completed, the pantry was stocked with enough food to feed several families.

The pantry is considered an extension of The Episcopal Church of the Holy Spirit’s beans and rice ministry, which is held the third Saturday of every month.

Mancil said he does not know of another Little Free Pantry in Alabaster. There is one at St. Andrews Episcopal Church in Montevallo, which is where the idea came from.

Mancil has spread the word about the pantry on Facebook, starting May 21.

The pantry has generated positive feedback, Mancil said, with people not affiliated with the church asking how they can help, which was the idea behind the effort.

Columbiana businesses bounce back from closure

By SCOTT MIMS / Staff Writer COLUMBIANA — Gabby Moreno is well acquainted with the ups and downs of business.... read more