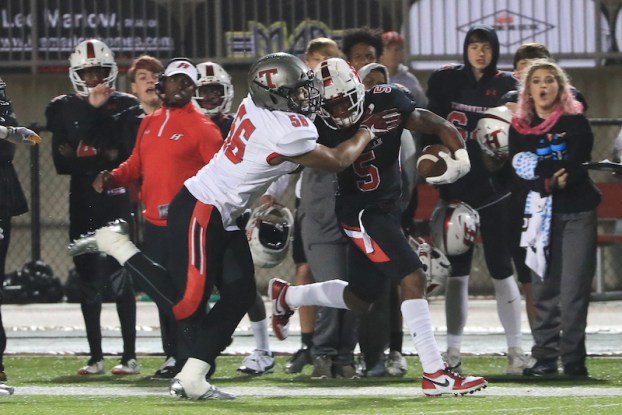 Peter Woods, above making the tackle, has offers from 10 of the SEC's 14 schools after a dominant season for the Thompson Warriors, but is focused on helping his team instead of looking ahead. (File)

In the moment: Peter Woods not looking ahead despite major offers

Since the age of 5, football has shaped the life of Peter Woods. Waking up to watch college football with his dad every Saturday was just the beginning of a tale that has now given him a future of opportunity.

Playing the game since he could basically walk, Woods had a quick passion for putting on pads, lacing up the cleats and walking onto a football field to play a game he seemed gifted to play.

“I knew I always had the potential, because I was blessed with the size and the IQ of knowing what to do when coached and how to be coachable,” he said. “I knew if I put those together with my talent, it was possible.”

While Woods had an inkling that his future could be bright in the sport, he didn’t expect to be 6-foot-4, 250 pounds as a freshman in high school with a body sculpted perfectly to not just play the game, but dominate it.

Through one year of high school football, that dominance has already reared its head. 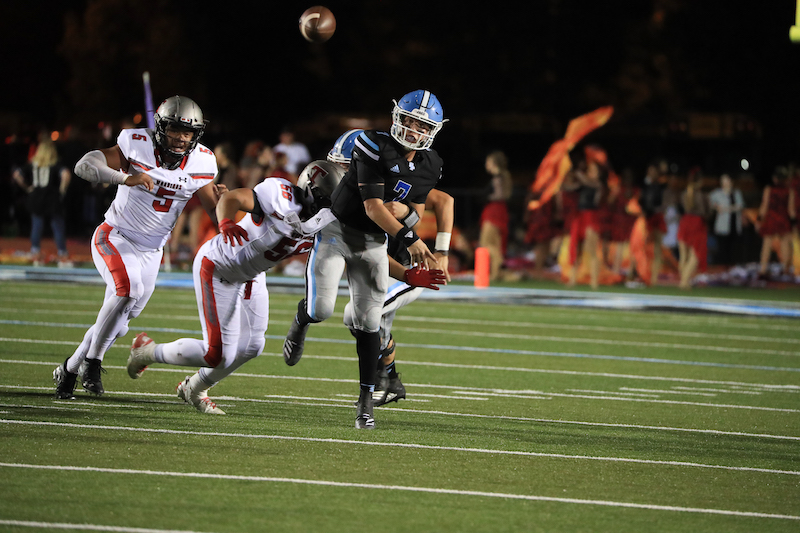 Woods hits Spain Park quarterback Harrison Barker as he releases the ball. (For the Reporter/Dawn Harrison)

Woods ended his freshman season with 15 sacks and seven tackles for loss, while also totaling 56 tackles on the defensive line. His stylistic play on the defensive line at such a young age played a major role for a young defense that was able to help claim Thompson’s second state championship in school history and first since 1982.

Following that successful freshman season, attention found its way to Woods from some of the most prestigious college football programs in the country, who were lining up to offer the young playmaker.

The offer list not only includes 10 of the 14 schools in the Southeastern Conference, including Alabama and Auburn, but goes well beyond that with offers from Florida State, Notre Dame, USC and many others.

“It’s all just a blessing,” Woods said. “You don’t really expect to be this young and have this much attention in the recruiting world.”

But Woods knows it’s partially a trap. He knows if he buys into the attention and accepts that he’s good enough now, he’ll never see a day in any of those uniforms.

“There is always somebody out there that thinks they are working harder than me, so my goal is to work harder than that,” he said. “I want to keep improving my game. I can’t put the same thing on film every year. If I’m not getting better, it shows I don’t deserve what I currently have.”

So for the time being, while he has all of these top schools pouring attention into him, hoping to lure Woods to one of their schools, he isn’t focused on a decision or one school with his attention elsewhere.

“Right now, I don’t really know how I’m going to take it all in,” Woods said. “I still have a lot of time to grow and develop. That’s my main focus. I want to get better so this isn’t all for nothing.”

And despite quarantining due to the spread of COVID-19, meaning all team football workouts and activities are currently suspended until at least June 8, Woods is putting in the work to get better every second of every day.

“I know there are some kids that are sitting around not doing anything right now thinking they’ll get better naturally,” he said. “I know where I want to go and where I want to be. That’s what drives me. Nobody being there to push me, makes me want to push myself even harder because I know what it’s going to take.” 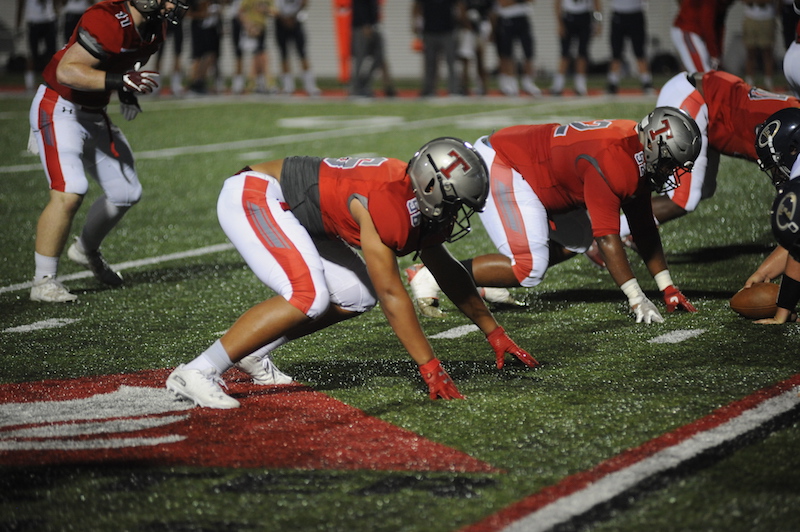 The coaching staff has been giving the players workouts to perform at home and the team is taking them to heart just as if they were there in person.

Many of the players have taken to Twitter to show the work they are putting in around the house to stay in shape and be ready for when they get the call that it’s time to return and prepare for the 2020 football season—and more importantly, time to return to defend a state championship.

“We, as a team, want to make another run to the championship,” Woods said. “We have all the pieces; we just have to have that mindset again that nobody can beat us. We’re not slipping up this year.”

Heading into the summer, that’s where Woods’ focus currently is.

While there is plenty ahead of him and more than enough to distract him from his goal, he and the rest of the team know the challenge that lies ahead after winning last year’s championship.

“It puts a big target on our back, which means we can’t do anything but work harder because we’ve set the bar for the teams in our region, state and even across the country. Now, they’re coming after us,” he said.

With a team loaded with returning talent, especially on the defensive side of the ball with many players boasting SEC offers, Woods said Freeman is doing a great job of keeping the team in check.

“He is really good about teaching us how to handle everything that’s going on,” Woods said. “We don’t talk much about what’s ahead. Instead, we thank God every day for what we have.”

Woods said he and his teammates are on the field for a reason, whether it be a game or practice, and that’s to do their jobs. He said that’s what makes Thompson so special is the trust they have in each other to do their jobs, because if they don’t, they know there is someone waiting to replace them.

And Woods has worked too hard since he first played the game at 5 years old to not give it his all and play as many snaps as possible.

While it’s still unknown when workouts, practices and even the season will start, Woods will be prepared. As he wakes up each day, his laser vision is on one goal—improving and letting no one outwork him.

By ALEC ETHEREDGE | Managing Editor The 2019-2020 sports season will go down as one of the most historic the... read more