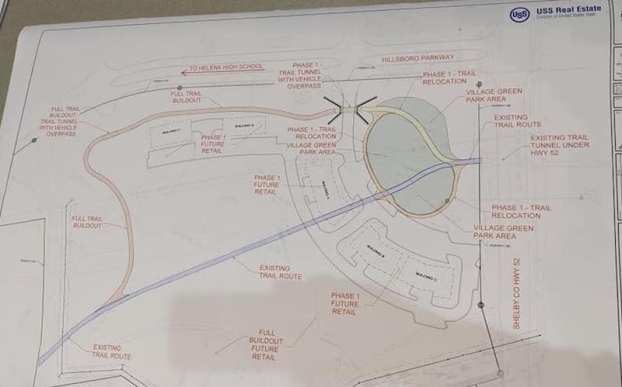 An outline of the area where U.S. Steel Real Estate is expected to develop a retail area for the Hillsboro community in Helena. (Contributed)

HELENA – A development project headed by U.S. Steel Real Estate will bring a new retail area to the Hillsboro community in Helena, as well as improvements for the trail system that surrounds the area.

“We expect there to be about four overall buildings that I speculate will house various businesses like small retail stores and restaurants,” explained Helena Mayor Mark Hall. “This will be something that people could come to from their walks around the community and through the trails.

This project was actually approved back in the mid 2000s but was halted because of the economic recession during that time period. U.S. Steel is now ready to move forward with construction and Hall estimated that the project will take anywhere from eight to 12 months for completion.

“This will include another trail tunnel so that people do not have to cross the road to get into the center,” Hall explained.

Hall also said that U.S Steel later plans to announce a $3 million park with recreation for children, more trails, a boardwalk and the restoration and preservation of historic coke oven sites along the area.

“None of this will be costing the taxpayers of our city any money,” Hall said. “These developments are all funded by U.S. Steel.