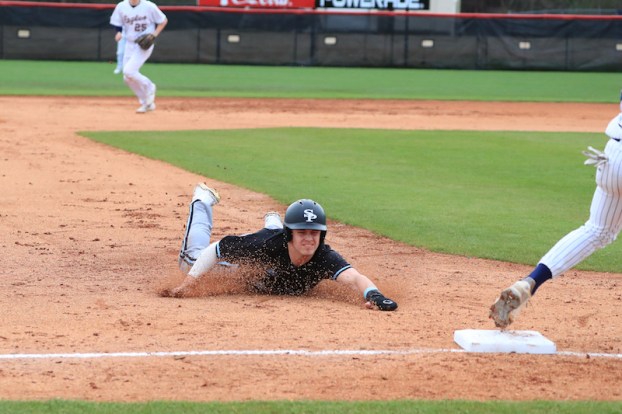 The Spain Park baseball game won eight consecutive games before the season was suspended due to COVID-19 on Saturday, March 14. (For the Reporter/Dawn Harrison)

The Spain Park Jaguars traveled south for the weekend of March 13, and came back home Saturday night with three more wins to extend their win streak to eight games.

The Jags took down Auburn, Daphne and Saraland all by at least three runs to complete the weekend sweep, while they are now 12-4 on the season heading into the COVID-19 forced break.

A big reason for the successful weekend was the strong offensive presence, which featured a combined 32 hits in the three games from the Jags. A recap from each of the three games is below.

Spain Park opened the weekend with possibly its best offensive outing behind 13 hits and nine runs against Auburn. The Jaguars scored three in the third and four in the fourth, which later was matched by four runs in the sixth from the Tigers, before the Jags came back with five in the eighth to win the game in extras.

The Jags were able to score two runs in the top of the second on a two-RBI single from Trent Thompson before another single from Adam Wygle led to Thompson scoring on an error by the second baseman shortly after for a 3-0 advantage.

Spain Park added a fourth run on a sac fly from Colton Ledbetter in the top of the fourth to extend it to 4-0.

Then, in the bottom of the sixth, Auburn put together a comeback. The Tigers scored two runs on back-to-back singles and the other two on a wild pitch and an RBI bunt.

With the score still tied 4-4 at the end of seven innings, the two teams went into extra innings, but the game didn’t last much longer.

In the top of the eighth, Spain Park put together five total hits, four of them in a row with two outs, to drive home five runs to take a 9-4 lead.

After Thompson singled and Wygle walked, a strikeout put two down in the inning. But Jack Poist hit an RBI single and Matthew Robbins hit a two-RBI double to put the Jags in front 7-4. Following a single from Conner Eberhardt, Ledbetter brought home the final two runs with a two-RBI single to end the scoring.

Jaxson Lucas then got the Tigers to go down in order in the bottom half to end the game.

Ledbetter, Thompson, Wygle, Poist and Robbins all had two hits, while Ledbetter and Thompson each had two RBIs. Carter Sidor, Ethan Smallwood and Everhardt each had one hit.

In game two, the Jags used two runs in the third, four in the fifth and two in the sixth to put the game away, while Daphne scored one apiece in the third, sixth and seventh.

Sidor got the scoring this time around with a two-RBI single on a line drive to left field in the top of the third to break a scoreless tie.

The breakout inning came in the top of the fifth when the Jaguars scored four runs, only one of which came on a hit when Wygle singled on a bunt that drove home Ashton Cobb.

Spain Park added its final two runs in the top of the sixth on a two-RBI single from Wygle.

Wygle led the way offensively with a 2-for-4 game featuring three RBIs. Sidor finished 2-for-5 with two RBIs, while five others had one hit in the win.

Eli Mefford got the start on the mound and allowed four hits and one earned run, while striking out five.

The final game was the most tightly contested of the three despite the Jags outhitting Saraland 10-3. But they never trailed in the game and ended up adding two runs in the top of the final inning as insurance to secure a 5-3 victory.

The Jags were able to take a 1-0 lead in the top of the first inning on a fielder’s choice that brought home Ledbetter.

Saraland answered in the bottom of the second, but Spain Park came right back with a run in the top of the third on an RBI single from Sidor that drove home Eberhardt for a 2-1 lead.

The Jaguars then added to that lead with another run in the top of the fifth on a single from Thompson to left field to take a 3-1 lead.

Saraland came back and put two runners in scoring position in the bottom half with just one out, but only brought one home, which left the Jags in front 3-2 at the end of five.

In the seventh, Robbins drove home two insurance runs with a double to right field, before Saraland went down quietly in the home half of the final inning.

Ledbetter finished the game 3-for-3 with two runs scored, while Thompson went 2-for-3 with an RBI. Robbins added two RBIs after going 1-for-4.