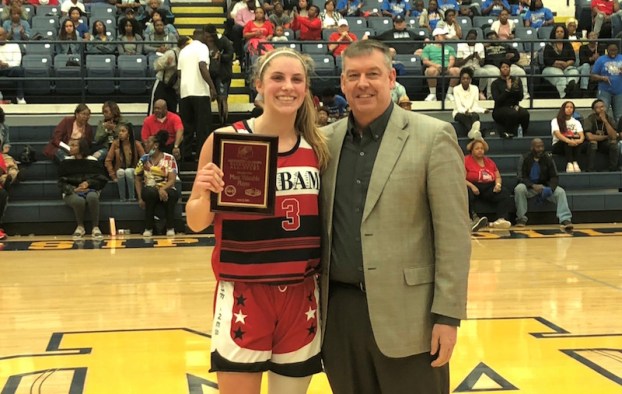 Barker had a dominating performance from start to finish to earn MVP honors as Alabama’s squad, coached by Hoover’s Krystle Johnson and Central-Tuscaloosa’s Michael Rivers improved its edge in the series that began in 1991 to 16-14.

Alabama’s girls started slowly and fell behind 6-0, but Sarah Ashlee Barker drilled a 3-pointer and Madison Academy’s Destinee McGhee sank two free throws to cut the lead to 8-5, and by the end of the quarter, both teams had settled in with Mississippi holding a 22-16 lead.

Barker continued to spark Alabama in the second quarter with help from point guard Niaira Jones of Charles Henderson and guard Jamya Tyus of McAdory, as the visitors outscored Mississippi 21-13 to take a 37-35 lead into the half. Barker had seven points at the half, Jones canned three treys and Tyus had nine points.

Alabama outscored Mississippi 33-28 in the second half and 54-41 in the final three quarters. Barker’s nine rebounds led Alabama. She had four on the offensive end and her team had 23 offensive boards total.

Mississippi out-rebounded Alabama 55-51, but the dominance on the offensive end proved to be the difference. Barker also had four assists, two steals, one blocked shot and sank two 3-pointers.

DaKiayah Sanders of Ramsay had three points and a game-high five steals. Pearson had four and Cold Springs’ Elizabeth had three. Alabama had 17 on the night with six players having at least one. Mississippi had 30 turnovers. Alabama had just 17.

Silentianna Collins of Brookhaven was named the Mississippi MVP. She had 14 points but just four in the second half. Melyia Grayson of Hattiesburg and Jacorriah Bracey of Thomas E. Edwards High School each scored 11 points for Mississippi. Grayson also had nine rebounds and three blocked shots with a strong performance inside for the hosts, coached by Vicki Rutland of Lawrence County and Bill Smith of Choctaw Central.

Alabama’s win was its third in a row and the 70 points by the winning team was the lowest since Alabama won 60-54 in 1997 in the game played at the University of North Alabama in Florence.

By ALEC ETHEREDGE | Managing Editor VESTAVIA HILLS – In a lopsided night of baseball on Friday, March 13, the... read more