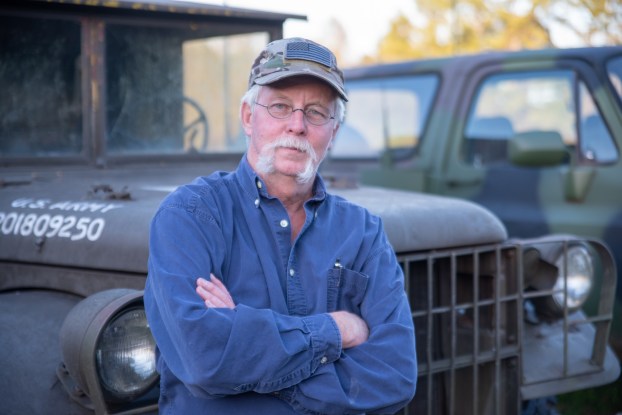 Drive past the farmland just beyond Calera Middle School on Highway 22 after dinner time, and it might look like any other hay field in the county, albeit one with a church steeple in the pasture. Drive past another day, and you might see actors in Civil War period clothing up on the steeple and a camera crew in a bucket on a tractor catching the action.

But to discover Spring Creek Prop Farm in its full glory, you’ll have to be on the hunt for props, or a magazine article. Driving up, the property boasts pastoral scenery that seems pretty ordinary—until you pass the row of military vehicles ambulances and police cars. Walk inside the simple yellow house just down the road from those, and what in the world you are seeing only starts to make sense with farm owner Len Ward as your guide. 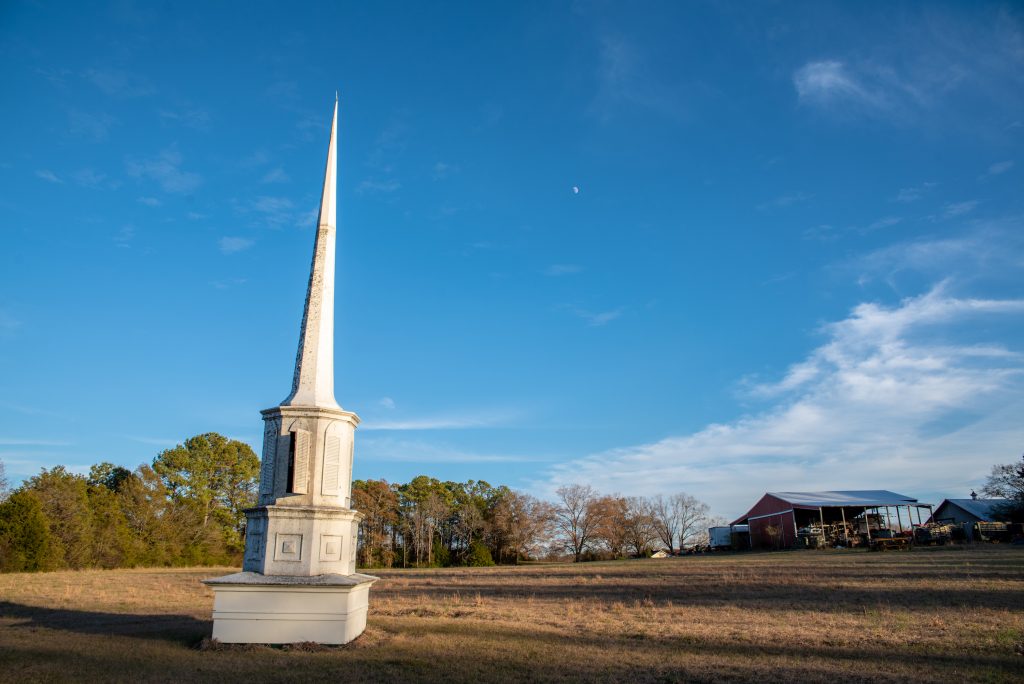 Choose a time period in the past century, and you’ll find what you need to outfit a scene with it. Want to play Coldplay on a 1970s reel to reel tape player or creepy murder scene music on a Victrola Record Player ? Ward will demonstrate how those work. After all, everything you’ll find in the house and really anywhere on the farm’s 200 acres is available for rent as props for movies, commercials, and school and community theatre productions.

Proceed through the house, and you’ll find luggage stacked from floor to ceiling, art that could be hung in any home from a sharecropper’s cottage to a high-end modern home, even a library of Japanese books. “We like unusual things,” Ward admits as he points out what’s on each shelf. And it won’t come as too much of a surprise when you learn three horror films have been shot inside the house too.

Behind a locked door in an interior room hang three walls full of weapons like, pistols, AKs, ARs, M-16s and more on display—most of which fire blanks. Plus, Ward or his business partner Chris Story will come on set to talk through safety procedures for their guns in their added role as armorers. At the base of one gun wall sits a barrel of swords—Civil War era, Marine dress, Japanese, fencing foils, you name it. 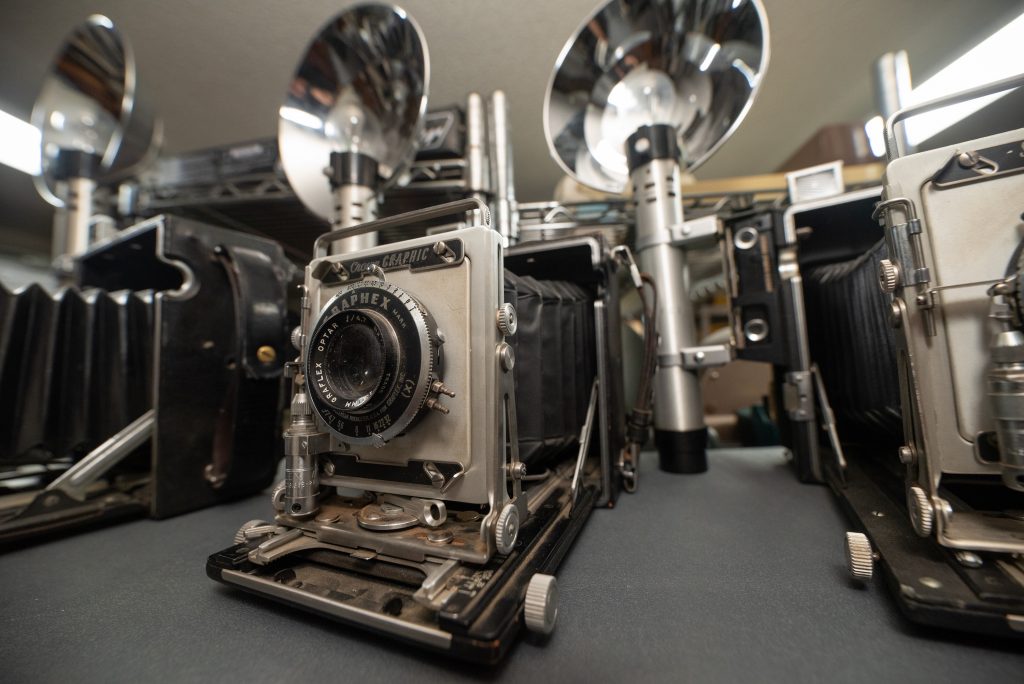 Just beyond that you’ll find the costuming to go with the weaponry, with military and first responder uniforms lining the clothing rack from wall to wall. Army, Air Force, Marines, SWAT Team uniforms—they’ve got that. In fact, it was that room that outfitted the police officers in the 2019 film Line of Duty starring Aaron Eckhart that was shot in downtown Birmingham.

With Ward as your guide, he can point out how to “read” a soldier’s rank and length tour of duty was and which war it was from, including his own father’s from the Pacific front of World War II. Often he or Story will even just buy the historic uniforms from families who don’t want them to preserve them out of respect to the service man, and they’ll ensure their integrity is maintained too. “One of the first things we ask is to read the script to make sure the uniforms are used correctly and respectfully,” Ward explains. “We have turned down three films we didn’t want anything to do with.” While their principal purpose might be to supply military and first responder uniforms, they are also preserving history with articles ranging from a World War II German Gestapo coat to a Russian prisoner of war’s coat, each ripe with its own stories. 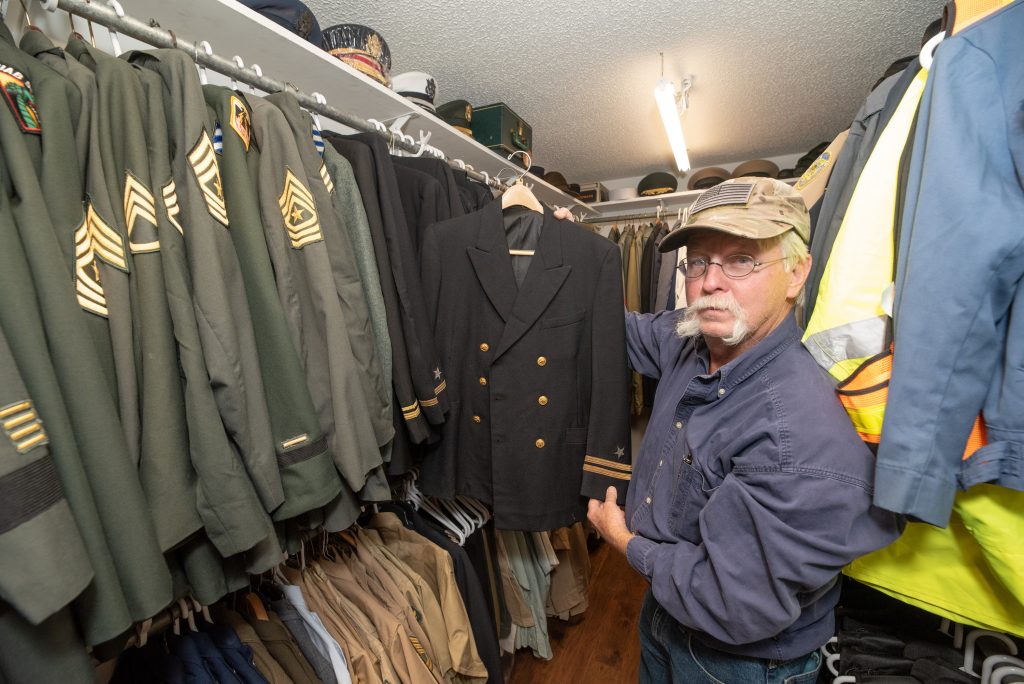 Just beyond the uniform room sits a space that houses the farm’s taxidermy. “If you are shooting a Southern scene in an office, you’ve got to have a deer head,” Ward says. So when the crew of Son of the South, a Spike Lee biography drama about the grandson of a Klansmen that is set to release in 2020, asked about furnishings for a sheriff’s office, Ward advised him they’d need one.

Ward admits he’s always had a “knack for acquiring things,” but his story started in traditional farming. His parents bought the Montevallo property they’d name Spring Creek Farm in 1972, and Ward went on to Auburn for two years for a forestry and agriculture program before starting a cattle farm on the homestead. At its height, he was raising 400 cows on 2,500 acres over several parcels of land, but over time he worked more into harvesting hay.

And then a dozen years ago he helped a friend build a set for Montevallo Main Street Players and saw they needed props that he already had at home. One thing led to another, and before long he was supplying props for music videos and more. The prop farm also kick started Ward’s acting roles from Montevallo community to music videos, where his first role was a preacher video a for country singer Nick Nicholson shot on the farm. Four years ago, Spring Creek Farm officially became Spring Creek PROP Farm—a term that as far as Ward knows hasn’t been used before, but then again you don’t find a lot of farms full of props in the industry.

It’s not unusual for a production crew to call several suppliers looking for an object before learning Spring Creek has just the thing—and they will soon learn it comes with service characteristic of not a big city but a small town farm. If a prop is on set, the Spring Creek team is on call, be it at 9 p.m. or 2 a.m. “If our props are out we are working,” Ward says. And when a vehicle goes on set, it comes with 24-hour on-call service and support and the mechanical know-how of Story, the technical arm of the operation who Ward first met through a Military Vehicle Preservation Association meeting (yes, that’s a thing). 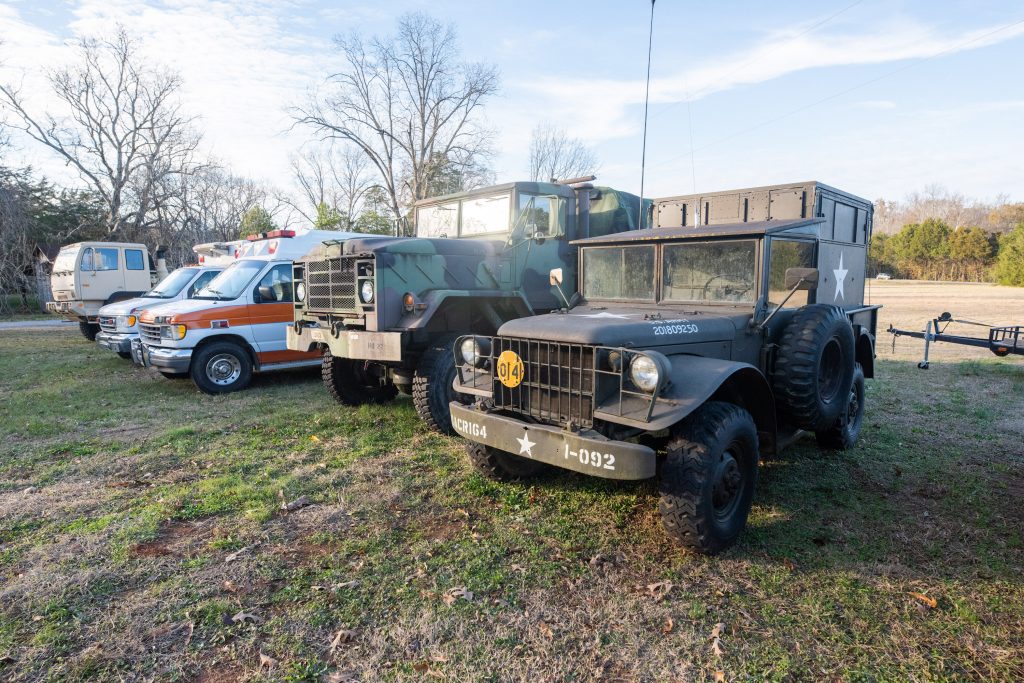 And that brings us to the Spring Creek fleet that parks just beyond the former dairy buildings on the property from eras before the Ward family purchased it. Story, the “company mechanic,” is into buying military vehicles in such poor shape that no one else wants them and then rebuilding them and outfitting them with gear specific to what movie crews need. For example, vehicles cannot be running during filming due to audio recording, but they need strobes and emergency lights on for long periods of time that drain the vehicle batteries. So Story has outfitted their emergency vehicles with a unique power management system that allows them to use all the lights and accessories for as long as required without needing the engine. Plus, they are all completely fitted with the resources and equipment that a real ambulance would have—something Story can guarantee are true to real life since he served as a paramedic for 15 years.

Adjacent to the fleet sit unassuming dairy buildings, semi-truck containers and room-sized containers of all shapes that house more and more sets of props. One holds racks of gear to outfit any militia from Vietnam, Korea, World War II, Gulf Wars or current issue along with canteens, working military radios and any other accessories to go with it—plus the expertise of Story, who is an Army veteran too.

Just when you think you’ve seen it all, Ward and Story tell us the best is yet to come, as Ward leads us to the farm’s original house, an 1820s log cabin that’s still in working order while displaying its original glory. According to Ward, it’s the oldest house in Shelby County and still has all of its original 120 acres deeded with it by President James Monroe. When his parents bought it nearly 50 years ago they pulled out the sheet rock that had been added and otherwise sought to restore it to its original design, albeit with electricity and running water. 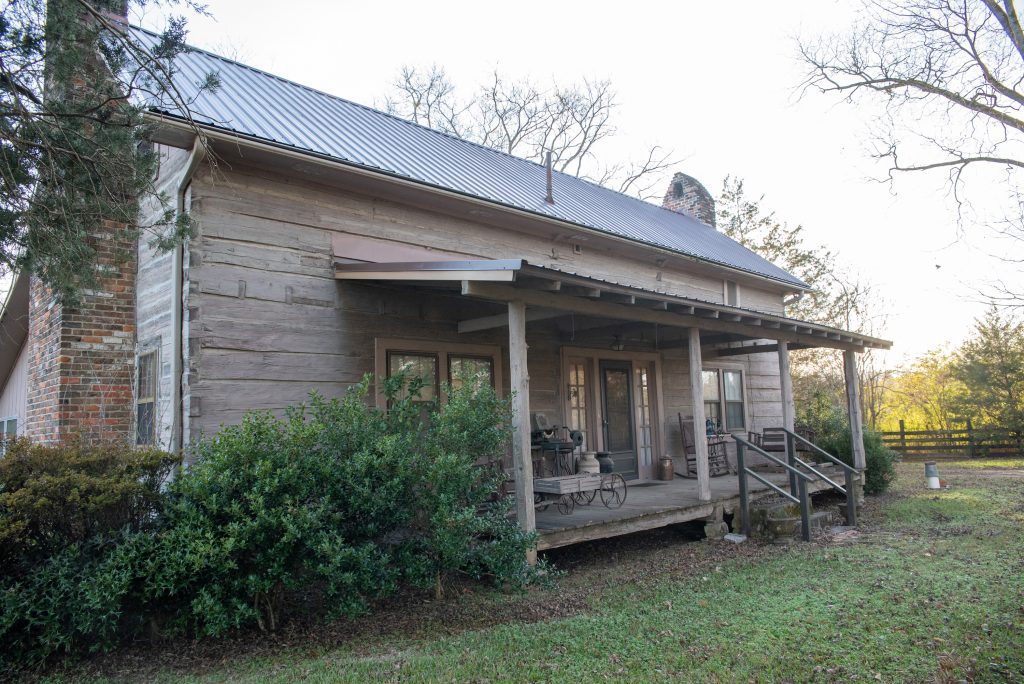 Even though Ward lives in the cabin now, most everything in the four original 18-by-18-foot rooms is true to its period—more props, if you will. The 2018 Civil War indie film Union was in these very rooms, and all the props—including the steeple in the field—were included in the deal. In fact, Spring Creek will rent out the whole farm to anyone who wants to use it for filming.

Leaving the cabin you’ll come across sets to transport you to any other decade too. A smaller container is filled just with the contents of a 1960s dentist office from the chair to the drill. It hasn’t been used it yet, but when the call comes, they’ll be ready, just as they were when calls have come for blacksmith shops, beauty shops and 1930s kitchens complete with a working water pump. One semi truck trailer holds lighting and telephones, and another electronic “supplies” from an electronics repair company warehouse they cleaned out in Columbiana. Goods from that site spill over into a former dairy building that also houses an old PA system that once was installed in a Homewood elementary school that Ward rigged up to be a radio system for a 1960s sheriff’s office for Son of the South.

“Every time we turn around someone asks for something that we got out of the warehouse we can use,” Ward says. “We have all this junk, but it’s good junk.

And, indeed, the whole “collection” is being put to very good use.

PROFILE: Abigail Heuton lives what she says: that young people’s abilities should not be underestimated

Eighteen-year-old Abigail Heuton is not someone a newcomer to Montevallo City Council meetings would expect to see sitting at the... read more