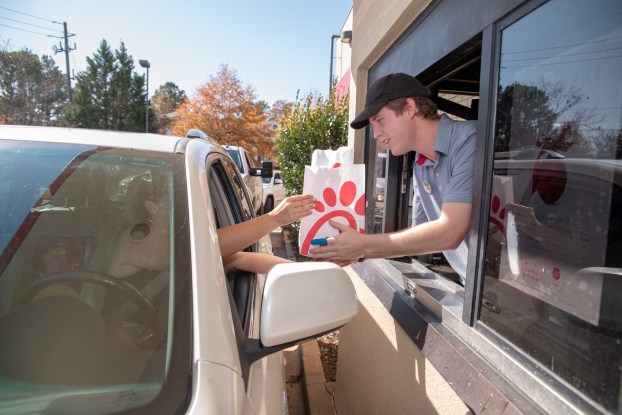 Mark Meadows wears a number of different hats as the saying goes, but on this particular day, he’s traded in his business casual attire for a bright yellow traffic safety vest.

But he’s not a public safety officer or a construction worker. He happens to be the owner and operator of the Inverness Chick-fil-A located along U.S. 280 in North Shelby County, and he is gearing up to help direct parking lot traffic during the lunch rush.

On the day before Thanksgiving, Nov. 27, 2019, Meadows transitions from the inside of the restaurant to the outside, where a line of cars, trucks and SUVs begin to fill both lanes of the drive-thru as the peak lunch rush hour arrives at 12 p.m.

“This is arguably one of the busiest days of the year for us because people are traveling and nobody is cooking because they’re all cooking tomorrow so there’s just a lot of right things going on,” Meadows says. “School being out also makes a huge impact.” 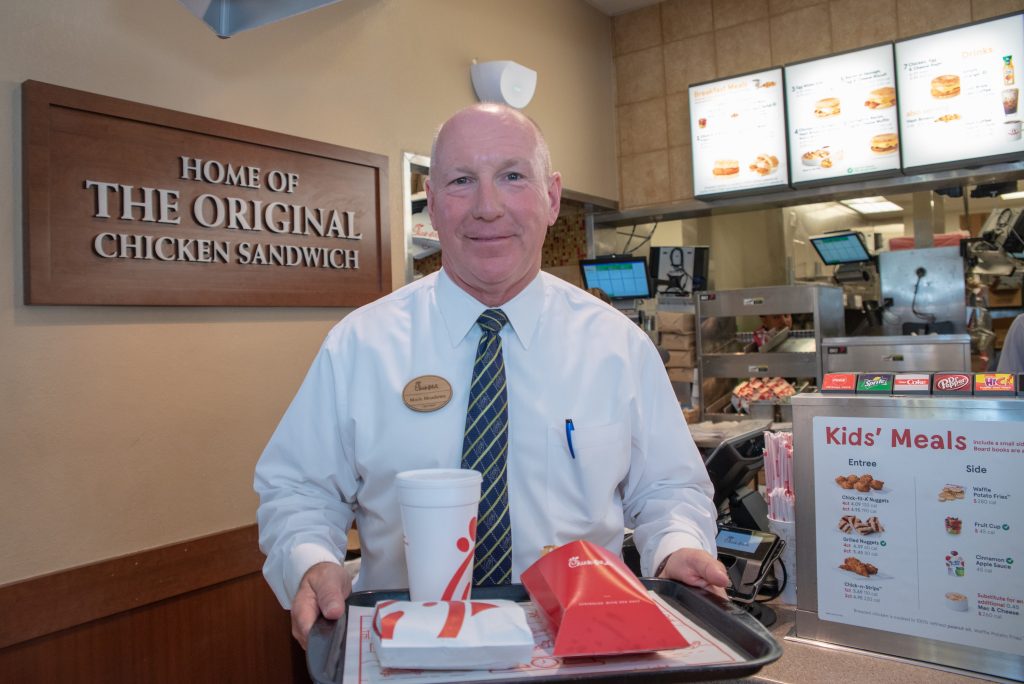 For 30 years, he has been the owner and operator of a franchise that is near and dear to the hearts–and stomachs–of those who live, work or even travel through Shelby County. While he tracks profits and oversees the overall success of the restaurant, he also directs traffic, buses tables, grabs refills and more. For Meadows, this is how things work at Chick-fil-A.

“What makes Chick-fil-A different is they are individually owned and operated,” Meadows says. “When Truett Cathy started Chick-fil-A, he wanted someone that wanted to be in business for themselves, but not by themselves and their income is based on the performance of the store. The secret and the difference in Chick-fil-A is me—not so much me personally, but the operator itself and the concept that Cathy had with the owner-operator deal.”

Flash forward to present day, and Chick-fil-A is on many more corners of Shelby County, with future locations on the way in places like Helena, and there’s no slowing down in the foreseeable future. 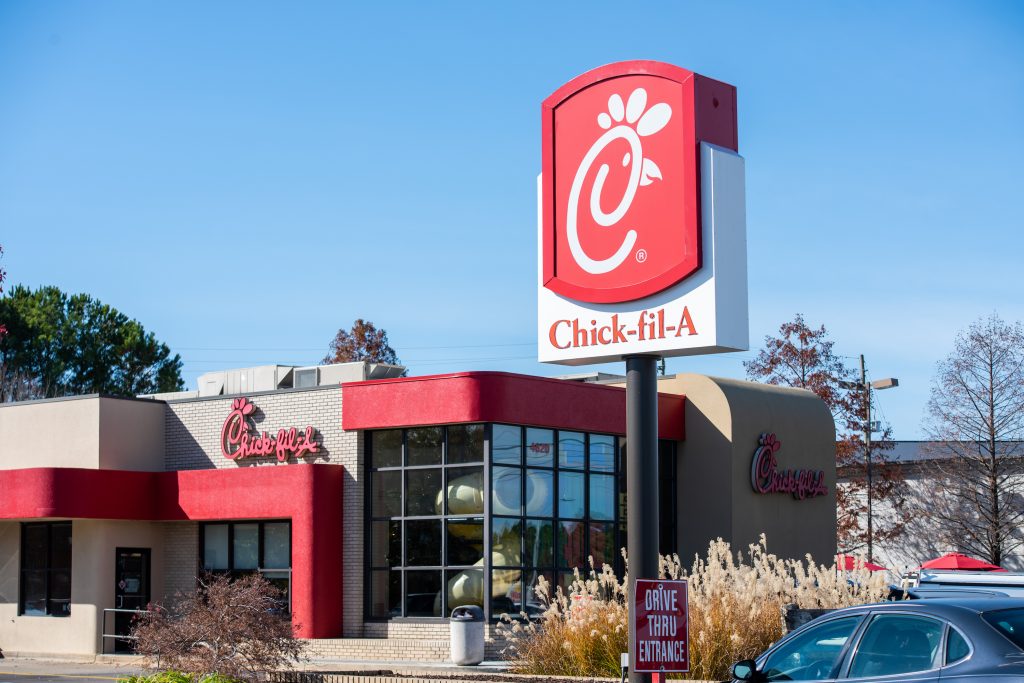 “The craziest thing is just how the overall volume of the business in not only this Chick-fil-A but all of them across the board have grown significantly in the last 30 years,” Meadows says. “You go back 30 years, and I think there were around 12 free standing units and several hundred mall stores. But now, it’s changed, and there’s not very many mall stores and there’s 2,000 plus free-standing units.”

While online ordering and mobile ordering have helped Meadows and his team keep up with the high demand that comes with a noon lunch rush, the success of the restaurant ultimately boils down to the people, he says.

One of those people happens to be his right-hand man, or woman in this case. Audrey Pitt serves as the catering director, one of the marketing directors and an office manager, and she’s been at the Inverness Chick-fil-A for the last 15 years. As customers begin to flock into the store in droves and vehicles wrap around the restaurant as noon approaches, Pitt readies her team to make things run smoothly.

“As far as preparing for the lunch rush, one of the biggest parts is just making sure we have all our best people in their best places and working where they work the best,” Pitt says. “We shift people around so it’s not so crowded in some key areas.”

One of the ways she shifts employees around is by placing them both inside and outside the restaurant doing a variety of tasks. “We have people working the drive-thru from the back of the restaurant during lunch instead of the actual drive-thru so we can keep down the congestion and the amount of people up front,” Pitt says.

Pitt helps assign certain tasks to employees, so together Chick-fil-A’s team can achieve the ultimate goal of satisfying its customers. “We have someone who is just dedicated to the dining room during lunchtime to keep things flowing and clean, someone is outside directing traffic during lunch, and we have a manager who’s dedicated just to watch an overall view. It’s called being on the wall. They just watch and help people to keep things moving.” 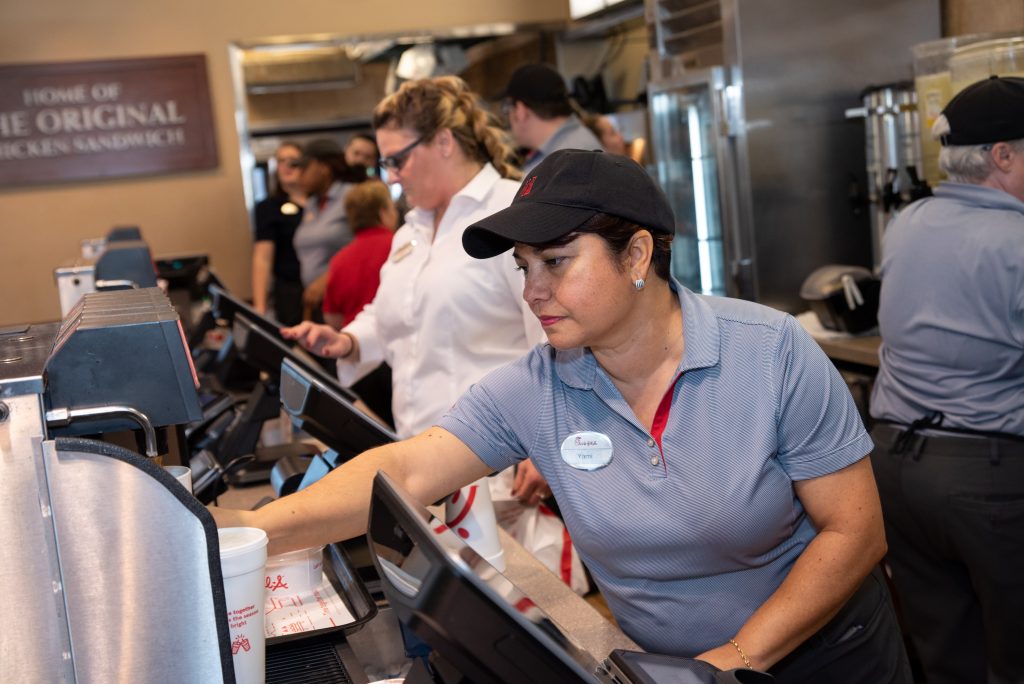 Depending on the day of the week, there could be anywhere between 23-26 employees who work the lunch rush. Surprisingly, Meadows says for his employees that time is more laid back, similar to a game for a football team compared to the actual practices.

“Arguably the easiest hour of the day is 12-1 p.m. and I’ll tell you why, it’s because we have one focus,” Meadows says. “Before that, we’ve got like 10 things going on because we have people going on break, people coming in and there’s just a lot of moving parts. From 12-1 though, this is it because we know we’re going to be busy and we’re focused on handling it.”

Why do customers love Chick-fil-A so much? Meadows says it’s a number of things, including the customer service and the food—which still appeals to him all these years later so much that when he leaves town for several days, the first thing he wants is a Chick-fil-A sandwich and sweet tea.

At any Chick-fil-A, it’s almost rare to go without hearing an employee utter the two words “my pleasure” when dining in or swinging through the drive thru, and this further illustrates why top-notch customer service is on point with the quality of the food at each restaurant.

After moving to the top as a fan-favorite for food in Shelby County the last 30 years, the Inverness Chick-fil-A should no doubt continue to fuel the people that make Shelby County one of the top places in the state.

In the last 15 years, Pitt says one of the biggest changes she’s seen at Chick-fil-A has been the complexity of the menu. Despite these certain changes or tweaks, the restaurant has not wavered from its core values of customer service, food quality and closing on Sundays. And that’s what it plans to do for decades to come.

By Alec Etheredge Cloaked in a black robe with his glasses on the bridge of his nose, Juvenile Court Judge... read more