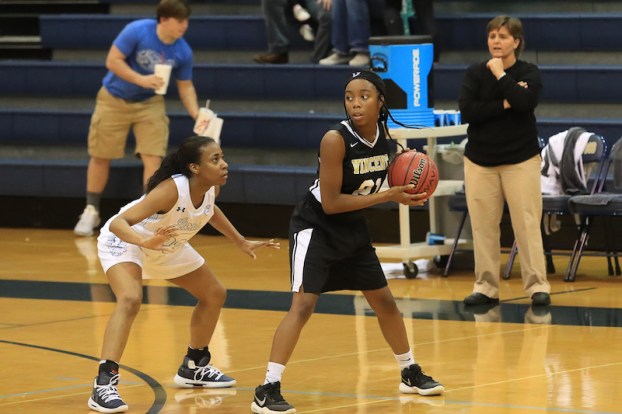 The Vincent girls basketball team will return several of its best players this season, and while depth is a concern, the Yellow Jackets still have a strong shot to win a region championship. (File)

Last season, the Vincent Yellow Jackets got off to a slow 1-10 start, but not only righted the ship following a difficult schedule early in the season, they also went on to advance to the postseason.

The overall record of 7-18 at the end of the year may not have been where the Yellow Jackets wanted it to be, but thanks to a 32-23 win in the first round of the area tournament, they advanced to the area tournament championship game where they lost by just three points.

The Yellow Jackets then advanced to regionals where their season started like it began—with a difficult matchup. This time it was Cold Springs, and Vincent went on to lose 77-31, but that loss ended up looking OK after the Eagles went on to win the Class 2A State Championship.

Now, heading into the 2019-20 season, Vincent is hoping to build off of that experience with the return of four star players.

“At tryouts, I had eight girls and only four that had ever played before,” head coach Stephanie Ledlow said. “Those four returning will be starters and will be key, but we are very young and inexperienced behind them.”

But the return of Zhari Posey and twins Tion and Toni Wright will be the focal point of this year’s team.

“It’s big to have those three back,” Ledlow sadi. “Zhari has been a leader since her sophomore year and she brings a lot to the game. She loves to play and works hard on her game in the offseason. Tion and Toni have both just gotten back from basic training where they worked extremely hard on skill development.”

Posey was the leader of last year’s team and will be a threat again this season bringing back 11 points per game, eight rebounds per game and two blocks per game.

But being one of the team’s biggest scoring threats, she has to be on the floor and stay out of foul trouble with the lack of depth behind her.

“I like blocking shots, but have to stay in the game this year,” Posey said. “I have to be more aware and make sure I stay out of foul trouble, which is something I have been working on.”

Ledlow said she’s been getting better and better at it.

Both the Wright twins also have a competitive edge not just from their twin rivalry but from just completing basic training.

“She and Toni compete so hard at practice,” Ledlow said. “They have different dominant hands, but challenge each other and try to be better with their non-dominant hand than the other is with their dominant hand.”

“Sometimes it’s hard taking criticism from her because we are the same age,” Tion Wright said. “But now we are back from basic training and we’ve been introduced to different environments. I think it’s given us a better understanding of leadership and how to handle difficult situations in a composed manner.”

That’s something that can come in handy through a difficult schedule early in the season.

Behind the four returnees will be a freshman point guard, who Ledlow feels confident can handle the pressure, but beyond that will be a group of sophomores or younger with very little experience.

Still, the Yellow Jackets feel confident going into the season.

“I expect us to win area,” Posey said. “We lost against Altamont by three last year in the championship game and I think we can at least compete like we did last year.”

After having just eight girls at tryouts and Toni Wright contemplating not playing, Ledlow said she feels much better now that the roster has taken shape and Toni has decided to return.

“It’s a good group of kids that understands how each other works,” Ledlow said. “Instead of getting mad, they know how to learn and grow.”

The Yellow Jackets will tip off the 2019-20 season on Friday, Nov. 15, with a road trip to Childersburg.