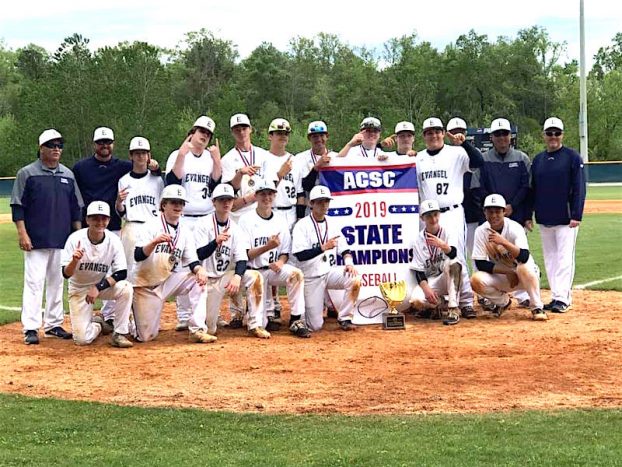 It was a historic season for local AISA and ACSC baseball teams, as the Evangel Lightning won the ACSC State Championship, the Kingwood Lions fielded their final team in school history, and both Coosa Valley and Cornerstone put together playoff teams that spent time inside the top 10 of the rankings.

What will be remembered from each team’s special season is the hours of hard work each player put in for their coaches and teammates to make it such a memorable year.

For Evangel, it marked an incredible season that saw just five losses, all to Autauga Academy and Bessemer Academy, two of the top teams in the AISA.  The Lightning finished the season 25-5 with the ACSC title.

Kingwood’s players, on the other hand, had a different kind of ending by fielding their final team in school history after the school recently announced its closure. While it was sad to see for those prepared to come back, the Lions worked together to leave behind a special legacy.

Both of those teams had standout players to help lead the way, while Coosa Valley and Cornerstone also had several top athletes in the county to help lead them to the postseason, including the AISA/ACSC Player of the Year in Kaleb Allen. A select list of the elite AISA and ACSC players has been compiled below in the 2019 AISA/ACSC All-County baseball team.

Pitcher: Chase Jones, junior, Evangel. Jones did just about everything for the Lightning this year and while he��s named to the All-County team as a pitcher, he also posted a batting average of .406 with 36 RBIs, 23 runs scored and 15 stolen bases. On the mound, he went 8-0 with an ERA of 1.19 and 47 strikeouts.

Pitcher: Mason Collins, junior, Kingwood. One of the biggest offensive threats in the county, Collins held a batting average of .475 thanks in large part to 11 doubles and one home run. He also added 17 RBIs. In addition to his presence at the plate, he was also the Lions’ top pitcher posting a 3.1 ERA and 76 strikeouts in 53 innings pitched.

Pitcher: Connor Shaddix, senior, Kingwood. Just behind Collins on the mound was Shaddix, who finished the 2019 season with an ERA of 3.7, while posting 31 strikeouts in just 27.2 innings pitched.

Pitcher: Sammy Shepherd, senior, Coosa Valley. One of the two leading pitchers on Coosa Valley’s team, Shepherd closed out his career with a 6-1 record and posted an ERA of 2.10 with 57 strikeouts.

Pitcher: Kaleb Allen, senior, Coosa Valley. Allen was the leader of this year’s team both at the plate and on the mound, and has been named the AISA/ACSC Player of the Year. Pitching wise, he led the team with 66 innings pitched and totaled a 5-3 record with an ERA of 1.06. He also posted a county-high 124 strikeouts, while allowing just 33 hits and 10 earned runs. Offensively, the senior batted .433 at the plate during the 2019 season, including two games above .600 and 17 above .500. He batted less than .400 in just two games this season. Allen also added 34 RBIs thanks to 45 hits, including 11 doubles, four triples and one home run.

Catcher: Carson Monroe, junior, Evangel. In addition to being the team’s catcher, Monroe was also the No. 2 guy on the mound posting a 6-1 record with 33 strikeouts. At the plate, he totaled 17 RBIs with a batting average of .345.

First Base: Charlie Yeager, sophomore, Evangel. Just a sophomore, Yeager has plenty of promise ahead of him. He batted .396 this season with 20 RBIs and nine stolen bases. He was also the Lightning’s No. 3 pitcher.

Second Base: Nick Green, senior, Cornerstone. Green has been a constant trustworthy athlete at Cornerstone the last two years no matter where he was placed, and he closed out the 2019 season as one of the Chargers’ leaders.

Shortstop: Tanner Falkner, senior, Cornerstone. Falkner continued to be one of the best athletes in the county this season, and that transitioned to the baseball field. He was a leader for Cornerstone in 2019 and a big reason the Chargers advanced to the postseason.

Third Base: Weston Akin, senior, Evangel. Arguably the best player in the county, especially among the AISA and ACSC teams. He batted .523 at the plate with 33 runs scored, 22 RBIs and 16 stolen bases. Akin was also the MVP of the state championship and only struck out once this season.

Outfield: Dawson Humprhies, senior, Evangel. Finishing second on the team with a batting average of .438, Humphries was also a dangerous threat at the plate for Evangel. He had seven doubles and three triples and posted 22 RBIs and eight stolen bases.

Outfield: Will Ferrell, sophomore, Evangel. One of the best athletes at the school and still just a sophomore, Ferrell posted a batting average of .411 this season with nine stolen bases to his stat line as well.

Outfield: Seth Harrison, senior, Evangel. One of the best defensive outfielders head coach Tim Smith said he has ever coached, Harrison batted .360 at the plate in addition to his stellar play in the field.

Designated Hitter: Jake Blankenship, senior, Cornerstone. One of the Chargers’ best football players this year, Blankenship closed out his time at Cornerstone with a strong showing on the baseball field as well.

Utility: Cole Stroup, junior, Coosa Valley. Stroup batted just .301 this season, but posted a strong total of 37 hits while adding 23 RBIs and 36 runs scored. He had eight doubles and three triples, while drawing 15 walks at the plate and stealing 12 bases.

Utility: C.J. Carr, freshman, Evangel. Just a freshman, Carr not only came close to batting .400 with his average of .391, but also posted 11 stolen bases to help the Lightning in 2019.

By ALEC ETHEREDGE | Sports Editor  Since the 1990 MLB draft, the Montevallo Falcons haven’t had any player drafted in... read more