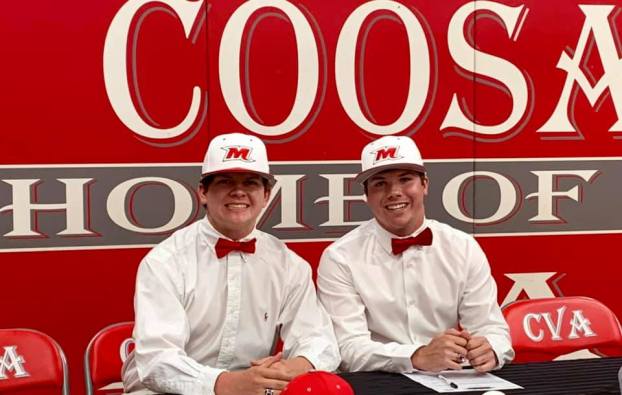 HARPERSVILLE – It’s been an impressive 2018-19 athletic season for the Coosa Valley Academy Rebels, and they recently added another special milestone when baseball players and friends Sammy Shepherd and Jacob Walton signed to continue playing at the collegiate level back on Wednesday, March 27.

Both guys played a key role on Coosa Valley’s 2019 baseball team that made it to the quarterfinals of the playoffs and finished an even 19-19 overall.

Six of those 19 wins were thanks to the effort of Shepherd on the mound, as he was the Rebels’ leading pitcher throughout the season, while Walton was on the catching end of those pitches. The two used great communication to create a dynamic duo.

Shepherd closed out this senior season with a 6-1 record overall on the mound posting 57 strikeouts and an ERA of 2.10.

That mark was impressive to many, and cemented his offer from Martin Methodist College, as he will now be moving on to join the Red Hawks at the collegiate level.

With his dominant presence on the mound with the Rebels, he’ll look to carry the momentum he has built and the lessons he has learned at the high school level and take them with him to the next step in his life.

“I want to start by thanking my parents,” Shepherd said. “They were always there for me. The amount of money and time they put into my life the last 14 years, you can’t add it up.”

He was also grateful for what his teammates did to lift him up, win or lose.

“I want to thank my teammates as well,” he said. “They always had my back even when we lost tough games.”

Walton finished the season with a batting average of .267 at the plate posting 32 hits. Of those 32 hits, 22 were singles and 10 were doubles, while he also drove in 16 runs.

He also ended the year with an average fielding percentage of .984, committing just five errors from the catcher position, which is an impressive mark.

The duo will now look to continue a friendship off the field and a strong combination on the field when they head to Martin Methodist for the 2020 baseball season.

By ALEC ETHEREDGE | Sports Editor GULF SHORES – With all three teams posting top 10 finishes in both the boys... read more